As an American who additionally lives in the United States of America (yes, literally all of them), I believe it's time for me to once again stand up to the tyranny and injustice that is the Office of the Commissioner of Major League Baseball. About a month ago, I attended a game where the Kansas City Royals, a particularly horrible team that has somehow managed to lose 58% of the games they actually won, tackled the Minnesota Twins, a team that stinks to a negligibly smaller degree than Kansas City. Hearing Twins fans talk smack about Kansas City is like watching a kid with Downs Syndrome slap around a retard. It doesn't matter who wins; at the end of the day, they're both inevitably ending up in the basement. 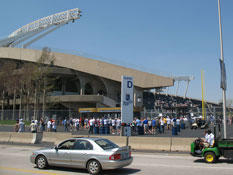 When I was a child, I loved attending Royals games. This, as many scientists and doctors know, is because children are very stupid. Kids rank on the intelligence ladder somewhere between plankton and those birds who are supposed to talk so you say "hello birdie" over and over again but they just stare into space and you end up feeling like the world's biggest moron. If you have any doubts about how retarded I was as a kid, please keep this in mind: one day in fourth grade I repeatedly rubbed my crotch up against the side of my school desk and one of my testicles flew up into my stomach. For all I know, it could still be in there now. The important point here is that Royals games don't exactly attract the brightest cookies in the stable. Also one of my testicles might be floating around near my lungs.

Unfortunately, Saturday's game proved how weak the local Missouri economy is, as Kansas City had to import foreign idiots from Minnesota to fill the seats normally reserved for our native idiots. There were literally two Twins fans to every KC fan, creating a surreal environment where more boos than cheers were heard every time KC scored. I bet that's pretty depressing for the KC players each time they knock in a run. Fortunately, it's a problem they hardly have to deal with. 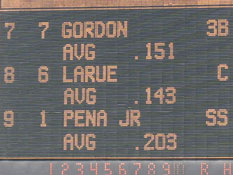 Stupid Tony Pena Jr., making everybody else look bad with his incredible batting average.INNING #1: The Twins forgot they were playing the Royals and accidentally failed to immediately score. Maybe they thought the first inning was the "warmup inning" here in Kansas City. You know, as opposed to the Royals who think the first nine innings are the warmup innings. Okay boys, let's play another warmup game and finish our warmup season so we can draft another warmup first round pick who will blow out his kneecaps whittling a corncob pipe in AA Omaha! Not that Colt Griffin, Mike Stodolka, Jeff Austin, and Dee Brown didn't pay off. I'm sure the janitorial director at the local YMCA compliments them on their positive work ethic before each paycheck.

To make things even weirder, the Royals managed to score multiple runs despite it not being April Fool's Day. I know Mike Sweeney got on base somehow, probably through the miracle of Jesus Christ Our Lord and Savior. I think he got thrown out after hitting second baseman Luis Rodriguez with an anti-abortion sign. Also Alex Gordon struck out, because that's what he does. They've given up trying to teach him how to hit, the batting coach just shoves Gordon towards the plate and says "AIM FOR THE BALL WITH YOUR FACE, ALEX! TRY NOT TO DIE." All of these actions were performed against starting Minnesota pitcher "Boof Bonser." Congratulations Boof, your parents bestowed upon you the name of an Outback Steakhouse entrée.