I will be updating with coverage of the final Democratic Presidential Debate on CNN as it goes down. Tonight's debate should be good as it's the first (and last) time Barack Obama and Hillary Clinton will have a one-on-one debate before Super Tuesday. 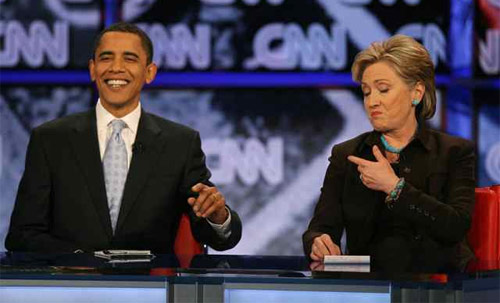 Wolf Blitzer on stage. Announces that the debate is being held in the same theater that saw the "last battle of the wizard's war." Did he just chew through a tin can?

[Update] It was a goat loose on stage. Blitzer is on now and he's wrestled the tin can from the goat.

Here come the candidates. Fireman poles again, just like South Carolina. CNN has a live slide whistleist to play them down from the second story of the Kodak Theater. Blitzer terrified by the sounds, he's covering his ears and trying to run into the audience. Looks like some horrible Internet people will also be asking questions.

Obama on Iraq: "I'll blow the lifeguard's whistle. I see the turd in that pool."

Healthcare questions. Politico.com guy asks Clinton, "Have you ever had butt worms?" Clinton pivots off worm question into stump about club foot.

Obama wants babies to have access to dick pills.

First real fight of the night over immigration.

Obama took "difficult stand" on wizards as Shadow Senator. Says it's about leadership. Clinton ready from day one to eject wizards into forbidden zone.

[Update] Blitzer sobbing at yelling. Interjects to ask for milk.

Politico.com guy asks what you would do if you were a turtle. Obama has a great ballad about there not being a white America and a turtle America, just the United States of America.

Clinton counters with a chantey about Reverse America, reminds Obama that turtles have shells inside their bodies there. Big win for her there with California's turtle demographic.

Short break so Blitzer can replenish his core fluids.

What do you guys think so far? Definitely a very courteous debate compared to South Carolina. I think both campaigns realized the acrimony was hurting the Democratic Party.