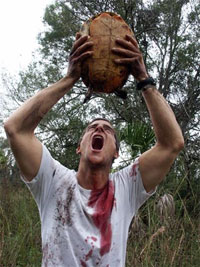 Bear Grylls feeding off the lifeforce of a turtle.One of the hottest reality shows on TV right now is Man vs. Wild (called Born Survivor in the UK). In it manly hero Bear Grylls gets dropped into various hostile environments with minimal supplies, and shows you how to survive and find rescue in the most deranged ways possible. Most of his techniques lean toward the extreme, often involving suicidal risks and eating and drinking various waste products. When not sucking moisture out of elephant feces, Bear is busy jumping into quicksand, wrapping his head in urine-soaked rags, or spouting sagely survivor trivia and coconut-induced death statistics.

I have been a viewer of Man vs. Wild for some time. I enjoy the absurdity of it and have always seen it as more of a comedy show than anything. No other show better captures the excitement of a daredevil showoff with no attention span making a mockery out of nature. Nearly every scene contains an unnecessary and potentially fatal risk, and very little in the way of survival information. I am quite certain that if I tried any of Bear's techniques, I'd either fall to my death or be shitting undigested goat eyeballs for days.


Naturally, the more sensationalist aspects of the show were quick to draw criticism. Many argued that the show was staged, and that Bear was aided throughout his ordeals away from civilization. Others criticized his techniques, noting that most were well beyond the capabilities of the average person. While it is true that folks like you or I would have a difficult time climbing a freezing glacial waterfall, we could certainly benefit from the knowledge that eating dead zebra flesh is a healthy pastime when stranded in the African Savanna.

The skeptics, however, gained the upper hand in the battle of Man vs. Wild faith. Recent revelations by ace reporter Andrew Wallenstein have blown the lid off Man vs. Wild and the actions of its supposedly resourceful protagonist.


LOS ANGELES (Hollywood Reporter) - First there was Santa Claus. Then came the Tooth Fairy. And just when you thought no one could fool you into believing in mythical figures again, along comes Bear Grylls.

But this British adventurer is now the subject of an investigation by U.K.'s Channel 4, which already has confirmed that Grylls checked into motels on a few occasions when he was depicted on TV having slept under the stars. Other allegations have been made suggesting that the crew that records Grylls in action isn't as hands-off as it might appear to viewers.

To make matters worse, Andrew Wallenstein goes on to say:

Knowing what we now know, it will be a challenge to watch "Wild" with the same zeal again. Naive as it now seems, viewers bought the notion that Grylls really was roughing it. If he cut corners here or there, what's to stop fans from doubting every facet of the show? 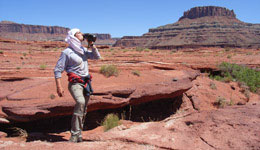 Bear Grylls wearing a hat made of urine.This is a horrible way for anyone to lose their innocence. When I think about all those poor souls longing for something real to believe having their worldview torn asunder by Bear Grylls and HIS LIES, well, I can't help but cry. Before you get worried that I might dehydrate, relax, I make sure to cry directly into my canteen so that I do not waste a single drop of moisture. This really makes you think about the real victims here: dumb pussies who believe everything they see. We often overlook their plight and I for one am glad that Andrew Wallenstein had the courage and compassion to bring it up. I hope Bear Grylls knows what he has done to these people and what he has taken away from them. While Bear is out pretending to battle the Wild, his distraught fans are battling the Self, their tired mouths scarcely able to suckle the moisture of hope out of the elephant dung travesty that is life.