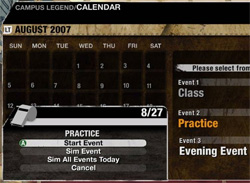 Welcome to NCAA Football 08's Campus Legend mode! Create your own high school football player and try to earn a spot as a starter on your favorite college team while balancing popularity and schoolwork. Will you be remembered as your university's most beloved athlete of all time, or will you flunk out and be forgotten after a month as the team's second-string waterboy?

Your Halfback has been picked up by the Florida Gators as a sixth-string running back, officially kicking off your journey to becoming a Campus Legend! Attend your team's practice every weekday to work your way up to the next spot on the depth chart, then make the right decisions in Evening Events to improve your social status and maintain your GPA.

You performed poorly at your first practice. Out of ten attempted handoffs from the quarterback, you only managed to grasp the ball once, and you were so overjoyed that you immediately spiked it for a loss of five yards. During one play you pulled the helmet off of the QB's head instead of grabbing the football. This might have been excusable if his helmet was the same shade of brown as the ball, but it was bright orange. Your mistake was made all the worse by the fact that you took the time to unfasten all four straps on the helmet as the quarterback flailed his arms and cried for you to stop.

You've been demoted to the seventh-string running back position.

Some teammates show up to your dorm and invite you to a night out at the local pub for a few games of darts. Do you:

(A) Accept their invitation although you're terrible at darts, hoping to make some friends.
(B) Decline politely, explaining that you must study.

You stay home to study, but fail to learn anything and hurt your brain a little. On their way to the bar, your friends come across a briefcase full of money and quit college to pursue a life of relaxing by pools while exotic women handfeed them exotic grapes and normal pumpkins.

You did much better today. It was a great practice. Unfortunately, you showed up at the wrong field and were actually practicing with the women's soccer team.

You get hungry and decide to make fried pickles. After gathering the ingredients, you think about how insignificant this meal will be in the big scheme of things and realize that even if you accomplish enough to be remembered after you're gone, it won't matter because one day our sun will explode and the universe itself will eventually collapse. Frightened and farther from the loving protection of your parents than you've ever been, you crawl under the cushion of your futon and cry yourself to sleep.