Are You Ready for Some Football (Mascot Endorsements)?

Recently, Cleatus, the mascot for Sunday football on Fox, and Monday Night Football legend Hank Williams Jr. sat down with me for a nice conversation. I wanted to have a discussion with national figures on the upcoming election. This is as good as it got.

Me: Cleatus, who are you endorsing today?
Cleatus: Well, Cleatus think change is due and Obama is that change. He is a nice man and a different man, both politically and colorfully. Here is a picture of us together when he was visiting other nice people. 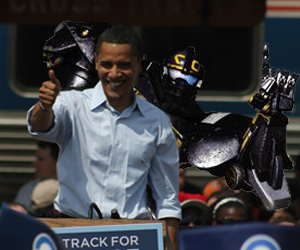 He let me pump up the crowd. I think he is the right person for president.

Hank: Oh shut up already. Give me that.

Cleatus: No Hank, you'll get your turn this is my time, you're just drunk again.

Hank: Shut the fuck up. Okay, am I on? Good. Hank Williams Jr. here. Forget that robot. He ain't done nothing in life but cry like a bitch. To think I went to jail for such a worthless robot. Oh well. I got out of there and now I'm here for one reason. McCain. Man, I woke up yesterday thinking Bocephus, you always stand up for what you like and you like McCain. So here I am, here to talk. Just me, my favorite glasses, favorite beard, you, and a bitch-ass bot. Let's have some fun cause all my GOP friends are coming over tonight!

What makes McCain so great? Everything. He's a Maverick. Think of a maverick, what comes to mind? A cowboy hat? Some nice sunglasses? Maybe a shirt of some sort? Yeah, you think of me. That old coot and I are soul brothers. We're linked together through ways I do not clearly understand. We drank from the same wolf teat.

Not only is he a mirror Hank, but the guy is also a great piece of human. He's the best mixture of everything, one part conservative, one part radical, and five or six parts reckless insane. The kind of guy to type an email in all caps, not out of excitement, but because he just don't give a shit. He has the first four seasons of the X-Files on VHS that he taped and a little glass case above to television to keep em in. Our friend Keith had a retirement party, and McCain took it upon himself to hunt a wild boar for the festivities. And he did. Caught a big ol' hippo sized pig in the back woods of Georgia. He cut the beast up and roasted it all morning before anyone got to the party and everything looked real good, but then he starting taking nibbles of it and then he damn well ate the pig before Keith even showed up. The whole boar, man. He was dripping head to toe with BBQ sauce and his own sick, but he didn't care. He did it all to trick Keith. A real Booya. A real Booya indeed. And that's what our planet needs.

Hell, you know what? Here's a little autograph from the Hank Man. 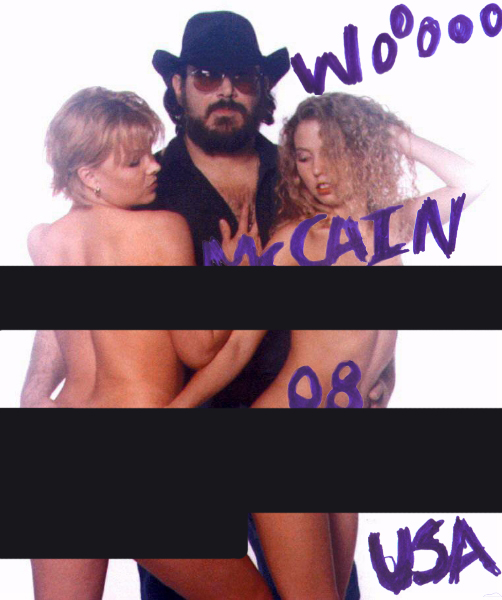 Yeah, you like that, I know you do. I bet you want the uncensored version, hell yeah you do. That's why I like you. Anyway, McCain will be the greatest, manliest, most white president since Andrew Jackson forced the Indians into arid desert land. Not only him, but also that hot piece of tail he's bringing with him to Washington. Wooooo-eeeeeee. Are you ready for four more years? Cause McCain is, without doubt, the best man for all right-wingers and all those sissy not right-wing people, too. Hell, I think. that he will probably... uh, oops.

Me: Hank, are you all right?

Hank: Yeah, don't worry about it you little twat.

Me: Wait, is your beard coming off?

Hank: Why don't you keep your twerpy mouth shut you little needledick.

Me: Is that a wig? Holy shit. McCain? What are you doing here? 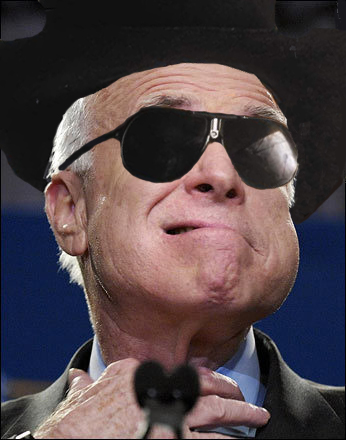