Yet Another Tribute to Michael Jackson 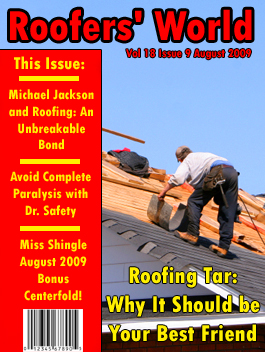 Welcome to another fantastic issue of Roofers' World! We come to you this month with a mix of good and bad news. First the good: we're proud to announce that our new podcast, "The Roof Goofs" (starring our own Tad and Tim!) was the third most popular roofing podcast on iTunes for the month of May! We might not beat out those juggernauts at Roofing Weekly or The North American Roofing Directory, but thanks to our devoted audience, we've gained a secure foothold in the roofing-related entertainment industry. Make sure to tell your friends to subscribe!

Now, the bad news. We at Roofers' World were putting the finishing touches on a feature about the controversial Fassbinder Method when we heard the disturbing news that beloved pop superstar Michael Jackson had died. The sudden tragedy nearly tore our office apart, but we managed to pull ourselves together after a rough weekend of introspection and roofing. By the time we all got back to work on Monday, it was impossible to avoid the topic of Michael Jackson; so, minutes before we went to press, I had the crew write some reflections on the King of Pop's passing. At first, we discussed how appropriate this would be for a magazine devoted solely to the art of roofing, but after reading Cat Fancy, Lego Magazine, and Civil War Times Illustrated's takes on Jackson's death, we decided that the spirit of MJ's music is inescapable, no matter your profession or hobby. Even though it's against OSHA regulations, we'll each be wearing a single roofing glove this month in honor of the Moonwalker himself. Michael, we'll miss you. 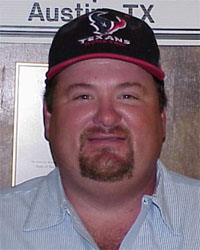 Michael Jackson. Michael. Michael. Michael. What can you even say about Michael Jackson in a mandatory 100 words or more? Weird guy. Odd duck. Seemed to like chimps, if I recall. Wasn't he friends with Eddie Murphy or something? I seem to remember that. Certainly didn't help Eddie's music career! Hah. Never really cared for the guy's albums. When I graduated from William B. Travis High in 1983, everyone wanted our class song to be "Thriller" and I wasn't having any of that. I lobbied hard for Def Leppard's "Photograph" but the student council settled for something by Dexy's Midnight Runners. In retrospect, it was probably a worse choice, but I'm pretty happy with how my life turned out. Oh yeah! I met my second wife in a bar while the DJ was playing a Michael Jackson song. Something about dancing on the ceiling? I dunno. We'll miss you, Mike. Take it sleazy up in Heaven. 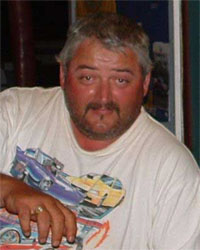 Michael Jackson's death hit me like a ton of terracotta tiles. Literally! If you're friends with "Big" Tim Stapleton, you've no doubt heard my infamous "hornet" story about how I hung 50 feet off the ground supported by only an extension cord as angry hornets stung my body for hours on end. This wild tale of me accidentally plunging my hammer into one of the biggest hornet hives in the Midwest has been told many-a time within the pages of Roofers' World, but there's one detail I always leave out: during the incident, the portable radio I always keep strapped to my side was tuned to a radio station playing a 24-hour Michael Jackson marathon. Since it took so long for anyone to find my body, I could only concentrate on the King of Pop's timeless tunes as hornets stung the everliving hell out of me for what felt like an eternity. Michael Jackson kept me alive that day, and now whenever someone so much as whistles "Beat It," tears well up in my eyes, and my throat closes up and somebody ends up taking me to the emergency room. I'm feeling kind of dizzy now so I'm going to stop writing, Frank.