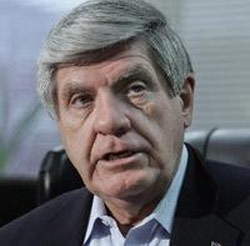 Nebraska Senator Ben Nelson is the tract through which all good legislation passes on its way to becoming shit. The cauliflower-nosed hobgoblin has the charisma of oatmeal and he represents a population the size of some of LA's suburbs, but he's arguably the most powerful man in Washington. He might not be able to start any wars or have anyone poison-darted by the CIA, but every time legislation steams past Nelson drags it down into the muck as surely as ghost pirates.

Nelson is able to do this for the simple reason that Democrats are pathetic and acting like they need 60 votes in the Senate to wipe their own holes. Despite having huge majorities in both Houses they shrink in fear at the idea of working late and forcing the Republicans to make good on filibuster threats. In case you weren't aware, the Republicans are threatening to filibuster everything that doesn't fund an explosion. They would filibuster a bill to give bigger dicks to old white guys if Obama backed the legislation. But they're just threatening, the Democrats very rarely call their bluff and actually make them filibuster.

One of the few times the Democrats stood up to the Republicans, the crazy-stupid Jim Bunning, the one Republican who mattered in that case, caved almost instantly because he was missing basketball games. Instead of learning from this experience, the Democrats constantly retreat to the idea of needing 60 votes. They need every Democrat, which means every time a good idea, like "Let's stop pouring fucking truckloads of cadmium in our drinking water" or "Poor people should stop dying from gum disease" is going to be turned into legislation it has to go in one end of Ben Nelson and come out a steaming, brown blast of chunky compromises, half-measures, and stupid pork.

Nelson is most infamous for his "Cornhusker Kickback," a scheme by which he was going to defer the cost of medicaid expansions in the health care plan to the US taxpayer instead of Nebraska because of something he made up about abortions. The Republicans did their job as the loyal opposition for once and called him out on this nonsense. He was shamed into letting it go from the final bill.

My personal favorite is Nelson on financial reform. Nelson supported an exemption to derivatives reform sought by Nebraska native Warren Buffett to help his Berkshire Hathaway company. While Nelson was pushing for this some decent reporter discovered Nelson and wifey owned over $6 million in Berkshire Hathaway stock. Nelson's response? He said it didn't influence his decision. Riiiight. 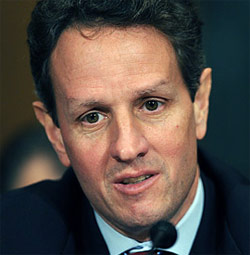 Most recently Nelson is siding with Republicans (the lone Democrat doing this) to block the broadly-popular extension of unemployment benefits to people out of work for more than 99 weeks. Without getting into the Republican's rationale for this (they're miserable turds), Nelson is doing it purely to spite Democrats because his state has relatively low unemployment. The statement he released supporting the Republican theoretical filibuster relies on twisted deficit logic of the sort Republicans have been dipping into heavily and wags Nebraska's 4.5% unemployment rate in the face of Democrats.

These things are all bad, but they're the sort of bad thing that any centrist Senator might wrangle for himself if he were particularly callow and shitty, and there are a whole lot of callow and shitty centrist Senators. No, Ben Nelson is an exceptional Fucklord. His sort of deals are the kind that involve complicated exchanges with the executive branch. Nelson is currently "possibly" involved in one of these and it's one so bad that it is at this very moment threatening to explode in the face of the Obama administration. By withholding his vote on financial reform until the last minute Ben Nelson has brokered a deal to have veto power over the new head of the Consumer Financial Protection Bureau.

"You don't know who's going to be head of the consumer protection bureau," Nelson said after a vote. "You can't just send a rogue agency out on its own." 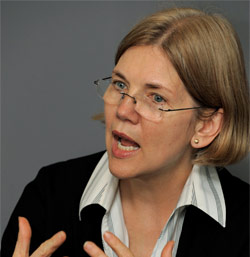 Now, this might not sound like a big deal. After all, it's just another new, worthless government agency on paper. Unfortunately for the White House deal wizards, the person Nelson wants to veto out of the job is Elizabeth Warren. You've seen her before. She's the spunky, middle-aged nerd that likes to go on The Daily Show and Colbert and talk about what a bunch of fucking moronic scoundrels we have running our country. She's hard not to love. Nelson disagrees and mysteriously immediately after he voted for the reform the Obama administration sent doll-eyed elf Tim Geithner trundling out of his gothic cuckoo clock to oppose Elizabeth Warren heading the CFPB. These are no doubt views already held by an investment bank rimjobber like Geithner, but his freedom to publicly weigh in against Warren comes from the White House.

The hue and cry from the liberals will be ignored, Elizabeth Warren will be shunted aside, and some bag of bones from one of the witch houses on Wall Street will be brought out to shape the agency that is supposed to protect consumers, but will instead become yet another instrument facilitating the synergistic relationship between corporations and government to reduce our country to a giant debtors prison full of Chinese TVs and foreclosed houses. If everything goes according to his plan, the man we'll have to thank for that is Ben Nelson.

The most powerful man in Washington.