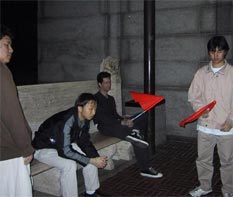 Life is more exciting if you include flags and sniper rifles.Modifying, remixing, and recreating games have become some of the most popular trends in gaming in the last few years. I doubt many of you need that spelled out with massively popular mods like "Counterstrike" and "Natural Selection" nearly eclipsing the popularity of the original game they modify. An entire subculture exists of mod teams developing hacks and add-ons for First Person Shooters, strategy games, and even "life" games like "The Sims". I'm not sure what exactly a mod for "The Sims" would be, maybe you could introduce axe-murdering and kidnapping to the usual tasks of pissing on the floor and throwing trash all over your kitchen. This technique of remixing powerful game engines to feed the needs of widely different tastes has yet to catch on in the real world. Why is there no underground team of developers working on mods to improve on chores like going shopping, working in an office, or washing your car?

In my opinion it's because people are all really stupid except for me and I am so incredibly smart and revolutionary that the world just has to play catch up. Get ready world, because you're going to have to set the volume to 11 and give 110% after you hear my ideas. The whole planet is about to be rocked and not in a soothing fashion, it will be rocked by a Parsons mind-quake measuring nine point fun on the Richter scale. I tell it like it is and I'm not afraid to be in your face with this ish! 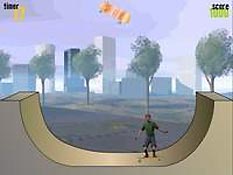 Skateboarding is fun. Having fun is fun.Original Task: Taking a Bath or Shower

Concept: Pirates have taken over your bathroom and only your reflexes, rapier, and a few friends can stop the evil swashbuckler Captain Beigebeard the Hookhooks from ruling the seven seas.

Gameplay: Fight through eight blood curdling levels against Hookhooks and his minions in single player mode or enlist a few good men to help you foil the dread pirate's nefarious schemes. The game will be heavily combat oriented and you can use your sword and other weapon upgrades to violently kill a number of opponents. There will also be a puzzle element to gameplay, although this will usually be as straightforward as collecting the keys to unlock various treasure chests throughout a level. Every other level will be guarded by a mini-boss hand picked by Hookhooks to stop your advance and shiver your timbers. Multiplay modes include Death Match, Capture the Flag, Swab the Deck, and Sponge Fight.

Your main weapon in the game is your basic rapier. This can be upgraded with power-ups that you can acquire or you can use a wide variety of alternate weapons. 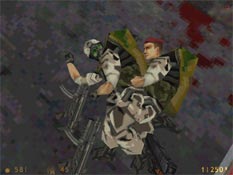 A screenshot from the new Tactical Hugs Mod.Original Task: Serving a Prison Sentence

Concept: Serving a long prison sentence is never fun. It's usually long hours of tedium punctuated with the occasional outburst of sudden violence. The new Castle Murderstein mod for prison sentences promises to remove all of the tedium and replace it with non-stop action. Dr. Murderstein has imprisoned you in his castle of evil. Fight your way through thirty addicting levels! Face gang members, abusive prison guards, mutant spiders, and Dr. Murderstein himself. If you survive then you will be released!

Gameplay: This first person action game includes all of the basics that make any first person shooter great, plus an innovative new "shiv forge system". You collect the material and create the shiv you fight with! Start with a bar of soap and carve it into a knife with your fingernails. Move up to plastic, adamantium, or even the legendary artifact shiv that is carved from the thigh bone of St. Anthony. The best way to win your freedom is by facing off against Dr. Murderstein and his evil monster, although in this non-linear romp you can choose from more than ten different ways to escape the castle. 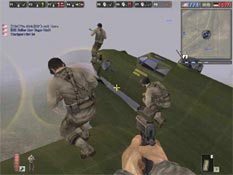 Concept: Your dirty laundry has been piling up for weeks and if you don't do something about it soon the mountain of unwashed pants might be declared a HAZMAT Superfund site. Join up with the Axis or the Allies in taking your clothes to the Laundromat. Get out tough stains and even tougher opponents in multiplayer team combat featuring up to 64 players. Take up a position pouring detergent into a washing machine while your teammate puts dryer sheets into the dryers, or man the turret of a Panzer III while a friend hauls ass across the 5-load washer section.

Gameplay: Laundromat 1942 combines the historic setting of World War II with a Laundromat, throwing you head first into deadly multiplayer action. You make the decision of whether you will fight for the forces of democracy and freedom, or fascism and oppression, with over a dozen historic weapons and vehicles. This mod includes 14 different multiplayer maps on which you and your friends can battle for dominance and cleanliness. Can you get the red out?

Microwave Leftovers or Suffer at the Hands of Alien Overlords

Concept: Aliens always pick the most annoying times to invade! You're just getting ready to pop some frozen food into the microwave when you realize that an alien invasion fleet from Zeta Omicron is using your kitchen as a gateway to earth. Only you stand between the aliens and mankind's total annihilation. Make use of what you can find in your kitchen and defeat the invasion fleet before they have a chance to set up a permanent beachhead into our dimension.

Gameplay: This is definitely not your grandpappy's first person shooter. You're used to games where you have weapons like combat knives, laser cannons, bio sludge blasters, rocket launchers, and sniper rifles. Well this game has some of those, but it also has basic kitchen utensils and various frozen foods that you will wield against the ceaseless onslaught of aliens from Zeta Omicron. In true Serious Sam fashion the screen will be so full of aliens that you won't be able to see any terrain features, but who cares, it's you're fucking kitchen and you've seen it a million times before.

Personally I feel that a vast untapped potential exists for mod-makers to shun the usual crop of "this year's FPS engine of choice" and turn to developing mods for real life. There are just way too many boring tasks that need to be made more entertaining and fast-paced. Let's hope that some ambitious mod-makers read this article and are already putting together the design-documents on Laundromat 1942.

Well hello, Josh "DEA Chief William S. Sessions" Boruff here to inform you that Photoshop Phriday is fresh, live, and ready to be eaten. This week the SA Goons decided to see what would happen if beloved video game characters decided to embrace a life of crime and ill repute. The results were quire humorous and goofy, which is just super if you ask me. Thanks for asking. Why not hurry up and give it a perusal? 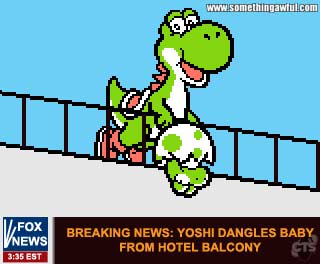 Our swashbuckling friends at Worth1000.com kindly sponsored this week's Phriday, so give them a visit. They've recently expanded and now boast regular contests not just in Photoshop, but also in text, animation, illustration, photography, and 3d graphics. If you have a set of eyes that you like to make quality use of, Worth1000.com is a great place to go. Heck, if you're looking for something to do with your spare time, why not try putting your skills to the test there as well!