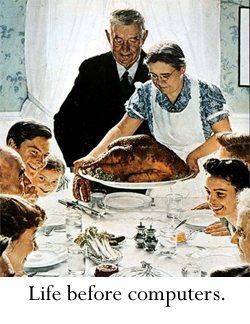 Maybe I am crazy, as so many of the reviews of my book on Amazon.com indicate. Or maybe it's more plausible to think that I'm the only sane one around here! Let me take you back to that wonderful time known as the 1960s, dear reader, better known as "my childhood." We didn't have computers tearing apart the family unit, and look how much better we had it back then; there was no war, far fewer murders, less violence, no depression, and the average dinner certainly had better cuts of meat. The technocrati would have you believe that life is much easier now, but I beg to differ. You can't even let your kids out of the house these days, and when you do, most of the time they come back with their minds full of crazy ideas about i-mails, e-pods; i.e., the many heads on the Hydra known as "progress" and "convenience."

The last time Dylan's friend Robert came over, he was wearing a pair of earphones and a digital music playing unit, and when I asked him why, he said that he "Wanted to listen to music during the walk over." Is this what our world is turning into? A place where people can entertain themselves at the drop of a hat during mundane tasks? Life used to be about building character, which is why Robert is no longer allowed in our house. I'd rather not have Dylan tempted by the crack-cocaine of the compu-zombies who can't go more than five seconds without staring at a digi-screen. Hey, addicts, it's called television--and it's served us well for the past 60 years. Sheesh. 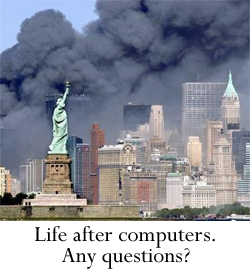 I wish I could say that this "Mom's Eye View" was held by most people, but many I've talked to disagree out of what can only be sheer ignorance. They spew their facts about literacy, dropping crime rates, and life improvement, yet I can't seem to shake the notion that these poor souls are just jealous for not experiencing the technology-free golden age that I grew up in; and frankly, I feel sorry for them. But this conflict is not limited to strangers--the Kunzel clan still has problems with my "backwards" ways. Just yesterday, I caught my son--who is now 17--talking about a video game machine with his father. The only thing I could say was, "I will not have a device in my house that simulates conflict and warfare! Now, hurry up or you'll be late for football practice." Thankfully, my husband has started to see things my way, which is why I have allowed him to buy a laptop for a project he proposed himself. Every night he researches the prevalence of Internet e-porno, and when he stumbles to bed after his research, I can barely say "goodnight" before Mr. Kunzel falls asleep. Poor guy; all of that e-vil really takes it out of him.

Yes, reader, there's pornography on the Internet; and in my next column, I'm going to blow the lid off of the computer's best-kept secret.

Debbie Kunzel is a professional mother and author of Wear a Jacket! and 101 All-Natural Headache Cures that the Government Doesn't Want You to Know About.