The Most Dangerous Game Of All

"I won't lie to you, my friends and I want to hunt you down and shoot you." Hannigan had said around a mouthful of bacon and eggs, either not noticing the yellow flecks he sprayed in a wide arc onto the diner's counter or not caring. He rotated his massive head and regarded me with those lazy steel gray eyes. "When we're done, though, you can do the same to us."

I considered this as I sipped my coffee. I had wolfed down my order of pancakes the moment they had arrived, and I was glad for that. My appetite would have surely disappeared in the presence of Hannigan's incredible wood chipper mouth.

"I suppose that sounds fair enough. You said there was money?"

"Of course. Five hundred when you get on the helicopter and another fifteen hundred upon the completion of the game. For a guy in your position, that's enough to get your life back on track. Or buy a shitload of drugs." He shrugged. "Either way it's none of my business. My only business right now is getting you to make the smart choice and say yes."

After losing my job and getting kicked out of my apartment several months back, I had been telling myself that I was on a road trip, a grandiose journey of enlightenmnet in the vein of Kerouac or Kain from Kung-Fu. I was, in fact, a bum hitchhiking as far away from myself as I could get. If I went ahead with this guy's proposition I'd be able to go back home, maybe even work things out with Beth. God I missed her. Almost as much as I missed feeling human after a steaming bath.

And so the shit storm was set into motion. We arrived in Montana by helicopter the following evening, where Hannigan's pals were waiting in a log cabin that looked like something out of Disney World. The place wasn't built out of necessity but out of an abundance of wealth. Crystal chandeliers, a big screen tv, what looked to be an original Picasso hanging on the wall opposite a fireplace the size of a car. I suddenly regretted not haggling for more money at the diner.

Hannigan introduced me to his friends. Simon Groves was a small, bespectacled plastic surgeon who blinked nonstop. Ed Lowery was a walking Bowflex advertisement that wore a too-tight polo shirt and constantly grinned as though he was remembering a particularly good joke. As far as I could tell his only occupation was being rich. Neither made any real effort to speak to me, instead seeming to size me up with a casual interest which I found unnerving. I assumed they were looking me over because of my disheveled appearance, but as I would soon find out I was horribly wrong.

To my relief, Hannigan shoved a pile of clothes and gear into my arms and pointed the way to my room.

"The game starts at dawn. Feel free to wash up and get ready tonight. There's a knob for hot water, one for cold water, and one for room temperature water."

"Why is there a separate knob for room temperature?" I asked, puzzled.

"Because some people don't want hot or cold?" he replied, equally puzzled.

"No, I mean all you have to do is run the hot and cold together to get the same thing."

"You hear this guy?" Hannigan barked over his shoulder at his friends. "Mr. Science is talking about some periodic table shit over here."

"He's quite clever." said Simon with a nod. "His resourcefulness should make for an interesting game."

After a glorious shower that could have lasted anywhere from half an hour to three hours, I sauntered into my room contentedly with the towel wrapped around my waist. This would be my first night in a real bed in weeks. As I reached to clear the mattress something caught my eye. On the bed next to the pile of clothes and gear Hannigan had given me was a yellow post-it note. It read, quite simply: 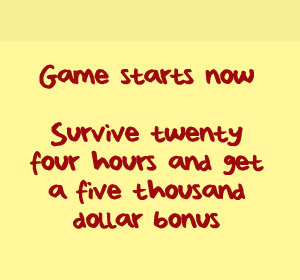 "Hannigan?" I shouted. No response. In fact, every light was out except for the one in my room. If I wanted that $5,000, I'd have to play along. I cut the light and put on the fatigues Hannigan had given me in the dark as quietly as possible, listening for movement elsewhere in the cabin. The clothes were several sizes too large but they would have to do. Finally I put on the Laser Tag harness. It came to life with the flick of a switch, letting out an electronic beep that I attempted to muzzle with a pillow. I would be their target. And I would show them how resourceful I was. That money was as good as mine.

After running in a random direction through the woods for several hundred yards, I hunched over with my hands on my knees and gasped for breath. The moonlight illuminated everything in crisp shades of blue, but somehow I didn't see Ed Lowery approach. I only heard the distinct sound of a Laser Tag pistol coming unsheathed from its velcro holster at the last second, and launched myself onto my back as Ed fired. If I had stood still it would have all been over, but as it happened the shot connected with Simon Groves, who had been sneaking up behind me. The alarm on his harness beeped coldly, and the device knocked his flesh inward with some sort of unseen force, pounding a concave dent in his chest the approximate size and shape of a punchbowl. Blood sprayed from his mouth and nostrils as his head whipped backward and upward. His glasses sailed off in a crazy spin, settling in the blood-spattered dirt as his body crashed beside them.

This wasn't a game. These assholes had rigged the harnesses. They were actually trying to kill me.

I scrambled to my hands and knees and snatched the pistol from Simon's lifeless hand. Ed snapped out of his shock and raised his own gun toward me, but it was too late. As the strangely satisfying "PWEOO!" of the pistol rang out in my hands, he suffered the same brutal injury as Simon had. Incredibly, he held on for a few moments, weakly kicking at the dust.

"What the hell is wrong with you people?" I growled. "Did you think I was just prey for you to toy with? Don't you realize I'm human?"

But Ed only replied with a question of his own.

"Why were we wearing the harnesses too? What were we thinking?"

To my left I heard a twig snap, followed by a familiar-sounding "Damnit!" I bolted toward the spot the sound came from, but when I got there Hannigan was nowhere to be found. Instead, his pistol lay snapped in half on the ground, a dozen chips of black plastic glinting back up at me in the moonlight.

Now he was the prey.

I've been on Hannigan's trail for three weeks now. On the fourth day I was assaulted by a ferocious black bear as I lay down to rest for the night, but luckily he was wearing a Laser Tag harness and I was able to take him down without incident. I don't know odds are of getting attacked by a bear wearing one of those, but they have to be at least one in ten.

Beyond that bear there has been nothing to keep me company aside from the increasingly warm trail of a soon-to-be dead man and also a bus full of people whom I saved from drowning in the river. Soon Hannigan will pay, and it will all be over. Afterwards? I'm thinking about settling down and owning property. Something with a cabin.