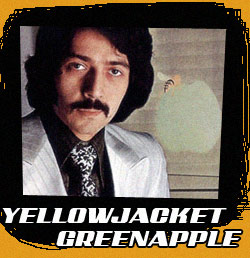 Somewhere far away a man plays a zither. Here and now, in the park, the leaves and the clouded sky, that is real. The cowboy is real. Real as the clotted blood of a bad shave. Too close and too sharp.

"Your move." The cowboy cocks back his hat, and rests his hands on the legs of his twin six-shooters.

"I reckon it's about high noon." The cowboy becomes anxious. "Good time for a draw."

Yellowjacket Greenapple's eyes open and flick to the Synchromass pocket watch dangling from his vest.

"It's eight past. Almost time."

"You're going to die." The cowboy spits.

"We all die," Yellowjacket plucks the cigarillo from his teeth, "just not soon enough."

The air shakes and roars. The cowboy blinks and looks around. The meteor strikes precisely where The Dauphin has calculated. The cowboy is gone, the last of his kind. The mission is a success. 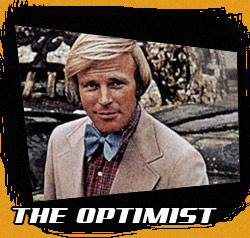 Scrolling green text on a computer screen. A silhouetted man walks past a wildly swinging bare bulb in a tenement. Trumpets blare and a harpsichord interjects sharply. A whip cracks and Yellowjacket Greenapple looms into view. Driven and dispassionate. Suave and horrid. A contradiction made flesh. He holds open his eyelid and slices a razorblade across his pupil. Emeralds spill out into a woman's cupped hand.

Yellowjacket Greenapple throws a hand grenade into an orchid greenhouse. He slashes a knife through a rare painting. He throws acid on a woman at a beauty pageant.

Yellowjacket Greenapple in shirtsleeves. He wipes clay from his hands. Behind him is an elaborate surrealist sculpture of a lion and a serpent battling, twisting together, becoming one. Everything speeds up and the lighting changes. It's in an art gallery. Art critics crowd around the sculpture and nod appreciatively. Yellowjacket watches from the wings. He smiles. He presses the detonator and the art gallery dissolves into white fire.

Yellowjacket Greenapple pounds a speaking lectern. He throws a medical skeleton at a ninja. He disguises himself as a fat woman. He breaks an ostrich's neck. A snail leaves its glistening trail on pages of draft printer paper. The words it has already traversed are the title card. 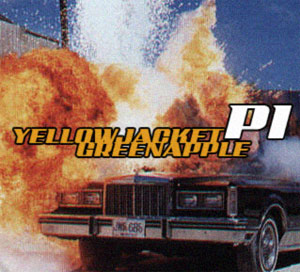 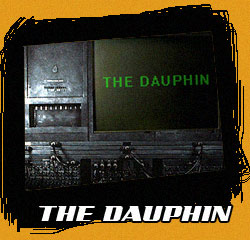 "THE WORLD IS WRONG." It burns on a huge glowing green-scale computer monitor. A cursor flashes at the end of the phrase.

"It is all wrong." Yellowjacket Greenapple stands before the monitor.

"I HAVE A MISSION FOR YOU." The cursor blinks. Larger. Brighter.

"I am ready for your mission."

"RECEIVE MY KNOWLEDGE." The blinking cursor is the whole world. It shines in Yellowjacket Greenapple's glassy eyes.

A flash of green light. Yellowjacket is in the memory banks of The Dauphin. He is sitting in a finely-furnished Edwardian study. The Dauphin sits opposite him in a smoking jacket. He plucks a pair of Pinc-Nez glasses from his nose.

"This is all too much." His voice is soft and girlish. "We won't make any progress at all unless you learn to complete your missions more quickly."

"Yes, yes, do your best." An exasperated smile. "You always do your best, but your best is not good enough. The world is wrong."

"The mission." Yellowjacket is eager.

"Ahh, the matter of your task. Yes." The Dauphin hands a sheet of yellowed paper across to Yellowjacket.

"FATHOM." Written on the sheet of paper. Small and lonely.

"There is your key word. Memorize it." The Dauphin returns his glasses to his nose. "First you must read eighteen books. You must keep your mind honed. I have prepared a list. A fine mixture of juvenilia, old classics and the ramblings of madmen. Just the sort of perspective you need. Once you have completed this-"

"Moments. Now, once you have completed this you must locate the remains of Esther Cunningham. She was the wife of an 18th century wainwright, but that is irrelevant. Disinter her skeletal remains and fashion a harpoon from her thighbone."

"She only has one. Horse accident in 1789. Terrible business. Fashion the harpoon and use it to impale yourself and Deacon Hull, the lieutenant governor of Pennsylvania." 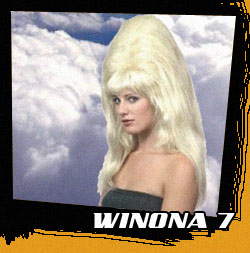 "Contractions are for the lazy. Have I not educated you properly? You must impale yourself as well as the lieutenant governor in such a way as your blood mingles. When he dies he must know that you are intertwined: that a part of you follows with him."

"Quickly. The world is wrong."

"And we will set it right."

A flash of green. Yellowjacket Greenapple wakes up on a subway, unshaven, disheveled and bleary eyed. The subway stops and he staggers out. Passengers give him a wide berth and a few wrinkle their nose. He struggles up the steps and takes a long swig from a glass flask hidden inside a brown bag. He approaches the glowing white of the ground level entrance. He enters the light…

…and emerges into broad daylight in the downtown area of a large city. His silver suit shines in the warm summer sun and his mustache is neatly trimmed. He looks both ways and sets off purposefully towards the Free Library of Philadelphia across the street. An elderly woman steps wrong to avoid him and ends up blocking his path. He side kicks her to the ground and continues on his way. A baffled police officer writing a ticket stares at him in disbelief. Yellowjacket Greenapple nods and smiles. The cop looks away.