My Belfry is Full of Chipmunks 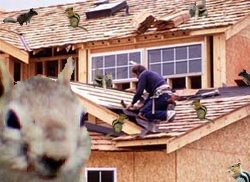 Well, it's springtime again folks. The snow has melted away from garden eaves, birds are singing once again in the groves of berry bushes, and NHL playoffs are in full gear, even though the Red Wings lost in the first round to the goddamn Mighty Ducks in four games, causing me a considerable amount of humiliation and mockery from my peers and colleagues. Besides lamenting over seasons past whilst pressing sweet wildflowers between the pages of my favorite Oscar Wilde books, Spring also stands for renewal and rebirth. The winter is a harsh mistress, and can cause a considerable amount of damage to one's mental state, as well as one's place of residence. That's why Spring is also a season for home repair. Those who live in a house know what I'm talking about, for it's a neverending chore to keep things in working order. Bob Vila knows this fact well. That's why he wears flannel shirts, and dons a beard to hide the pain. It's only a matter of time before his mind snaps, and he caulks his mouth and nose, and throws himself into a cement mixer in a desperate cry for help.

My list of things that need to be fixed this spring is plentiful; full of various odd jobs that have fallen into ruin. I moved into an old Victorian house with my seven year old son Nathan two years ago, and it has been nothing but arduous, backbreaking work. Luckily I'm blessed with the natural aptitude to be really good at like, everything, so these problems are not so much of a challenge as they are time consuming. Between my job, writing this update, and squandering precious hours of my young life on the Something Awful forums, I really have no time to write back the literally hundreds of fan mail letters I receive each week, so don't think I'm not writing you back because I think I'm above you (even though I am.) So I've decided that it might be generous of me to talk about some of the projects I've been working on this spring in order to share the wealth of information with those who own houses, or plan to once they get a better job than working at "Hotdog on a Stick". Hopefully you will find this update helpful, unlike a typical Richard "Lowtax" Kayakaya article about various dead bodies appearing in his apartment's communal pool that have been viciously bludgeoned to death with a black garbage bag full of assault rifle rounds, baffling the homicide detectives to no end, and making for a great "whodunit" on A&E. Let us take a look at some of the stuff I've been working on the past month.

This basic project is considered "beginner's level" repair, and is quite easy for learned handymen such as myself. I know you're thinking "Hey Frolixo, how come you are such an expert on everything? Is there anything you can't do?" Not really, but I do admit that I'm lacking in the frisbie throwing department, and it haunts me every single day. This was one of the first things I fixed on my house since doors are so important, and it was not latching properly. Although fairly easy, this repair takes a good amount of time, so set aside at least a month, and stock up on tomato juice. Here's how to do it:

First, remove the nails left in the molding from the backside using nippers or locking pliers. Pull or drive in any nails left in the jamb, and close the door. Let the latch bolt engage, place the stop in position and press it lightly against the door. Now tighten any loose hinge screws. If the hole is stripped and the screw won't tighten, remove the screw and drill a deeper pilot hole for a new 3-in. screw that will extend into the framing behind the jamb. Remove the strike plate and fill the screw holes with wood putty or a glued matchstick. Use a sharp chisel or utility knife to enlarge the mortise in the direction that you need to move the plate. Pour the heroin powder onto the spoon, and heat with lighter until liquid. Extract the liquid with the hypodermic needle, and inject into your right or left eye. Repeat process, and wallow on squalid, filthy mattress for 4-6 weeks. Tip head to the side to avoid drowning in your own putrid vomit. Test door by shutting repeatedly. 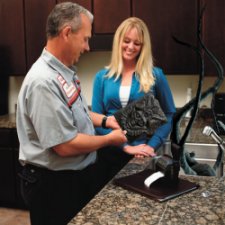 Marvin the plumber helps dispel this blonde woman's Old One. Then he fucked her brains out.

I am writing this for a historical record in the event that the unwholesome thing I abolished on that fateful night returns, or the sheer terror from my knowledge totally engulfs me in complete madness. After completing this plumbing repair, I realized that some of life's dark secrets are hidden for a reason; that the human mind cannot grasp the dark realities that exist in the universe.

I first heard the noises coming from the sink whilst preparing some butter scones for brunch. Upon further inspection of the most queer racket, it seemed that the noisome slithering was coming from inside the drain. Dark whispers floated from the steel crevasse that my mind could not, or would not, comprehend. I turned on the hot water, trying to wash away the foul sounds, yet something was blocking the flow causing the water to back up as black, foul smelling slime that tasted a lot like pudding. I gathered that I was going to need some help fixing this problem, and so enlisted the aid of a confidant of mine who has experience in the arcane. We headed over the the local community college to borrow their copy of the mad Arab Alhazred's "Necronomicon", then returned to deal with diabolic menace taking residence in my plumbing.

Grabbing my pocket torch, we made our way down into the basement of the old Victorian house, feeling our way along the ominous staircase of rough-hewn stone. We stumbled through the fetid darkness, the floor strewn with 70's pornography magazines, and the noxious array of Turbograpix16 games. Then we came upon the unnamable horror which I loathe to recall to this day. Out of the inky blackness of a yawning abyss came a horrid stench of a thousand graves being opened, making me and my male companion double over, retching. A withering mass of tentacles and eyes issued forth from a stinking pit of horrid decay, idiot flesh coated with greenish slime, wriggling obscenely. This monstrous star spawned from the deepest recesses of alien dimensions had been feeding off the food refuse from my garbage disposal, growing strong to bring destruction to this planet. Somewhere far off, drums could be heard, primal beats of worship from swarthy natives in Africa. My comrade went insane, throwing himself into the beast's gaping maw while letting out a shrill scream, ending the suffering of his dreaded knowledge. I shouted out a passage from the Necronomicon, opening up a vortex to the demon's dimension, banishing it from this world for the time being. The sink was now fixed, and I resumed my buttered scone brunch while reading the Sunday comics. 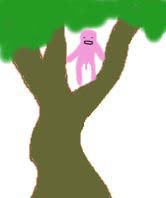 A fence will keep perverts out of your trees.

Some people don't like fences because they divide the community, making each house a walled off section in a neighborhood of alienated, paranoid, mean-spirited people. Those people are stupid and need to die. With the crime rate, drug use, and Mormon visits on the rise, it's one's duty to protect one's family. When I moved into this house, there was no existing fence, so I had planned to erect one once I could take time off my busy schedule of playing Civilization III. Well, I procrastinated for a long time, and paid for it dearly. A few weeks ago, I found a crayon drawing from my son, Nathan, that disturbed me. It depicted a naked man standing in a tree. When I confronted Nathan about his drawing, he told me that every night a man stands in the tree by his window, peering into his window and rubbing his male genitalia against the rough bark. I was outraged! So that night I waited outside in the bushes, and lo and behold, the naked man crossed into our yard, and climbed the tree, performing his perverted ritual of peering, and rubbing. It also looked like he had headphones on, and I could distantly hear Bananarama. I'd had enough.

The next day I began construction on a fence to encircle my property to keep out random vagabonds and miscreants. I stole 60 boards of wood from my neighbor's fence and dug pits to plant them into the ground. Instead of going with the regular 6ft. height, I went with 12ft. for extra safety. Once that was done, I painted them a base color of black with red skulls overlaying. This was to scare away potential intruders and Jews since I heard they are frightened of skeletons. Then electrified hurricane barbed wire was looped across the top of the fence, it's barbs laced with deadly blowfish toxin. In case the perimeter is breached, a machine gun nest was installed on the roof. Finally my household was safe. Imagine my surprise when the next night I saw the naked figure humping the tree while listening to Bananarama again. It turned out to be the guy I picked up from the bus station and was letting stay in my basement the whole time! I found out he was responsible for the Old One as well.