The Mystery of My Hole 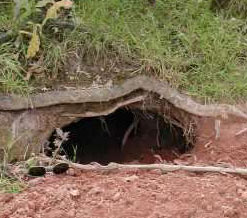 Ladies and gentlemen, I have an infinitely deep hole. It has been a long road traveled to be able to admit this, so please do not take me lightly. I have been rather secretive about this hole, as I have sought to guard against its misuse and exploitation, as well as cover up my own misuse and exploitation. But now, at this late stage, I am pleased to announce to the public that I am in possession of a world-class mystery hole, to which there is no bottom.

I discovered this hole initially by peering at my backyard patio area and noticing a large black circle. Curious, I attempted to touch the black circle, but found that my hand merely entered into the black circle's form. Naturally I started throwing things in it, such as sticks, rocks, potatoes, and bags of old underwear the Goodwill store refused to take off my hands. After several days of depositing things in the black circle I determined it to be a hole, and likely a very deep one.

Like any of you I feel that science, while largely a corrupt arm of the Communist party, is not without some legitimate uses. One of my first endeavors was to find out just how deep the hole was. After spending about six hours pumping water into it with a garden hose, I concluded the hole was at least "near-infinite" in nature, since I saw no signs of water when gazing into it darkness. I didn't even hear a splash when I lugged a mini refrigerator out and pushed it in. I did instantly regret it, however, as my sandwich was in that fridge along with most of my condiments.

Over time my curiosity turned to anger, as the hole seemed to be not just a hole in my backyard, but a reflection of my soul. I would drunkenly leer at the hole with disdain, longing to fill it but lacking the volume of materials to do so. I would hurl bottles and rubbish at the hole in a drunken stupor, cursing its name along the way. "Hole" I would yell in an angry voice! "Hole" I would repeat in a soft, defeated inflection before collapsing in a pool of my own vomit.

I tried so hard to fill that hole up, throwing everything I had into it. It became a horrible addiction, my secret shame, the omnipresent empty spot I could not get rid of that hounded me day and night. I'd spend all my money buying things to dump in the hole, hoping to fill it up. I'm not ashamed to admit I even contemplated throwing myself in the hole. Then I would finally know just how deep the hole was.

I think I first learned my hole was special when, in a bout of frustration, I peed in it. Amazingly, some two hours later, I had to urinate again. The very same urine I just emptied into the hole returned to me, boomeranging back to my bladder through some ethereal backdoor tunnel. Could it be that the hole was magical? It appeared so, for how else could my bladder have assembled such a collection of urine so fast?

My outlook brightened and I longed to prove that the hole had no bottom, that it was indeed infinite and therefore infinitely full of potential. A bottomless hole could conceivably solve the world's problems. You could dump massive amounts of waste in it, freeing up valuable space for everything from city parks to internment camps for terrorists. That is, the terrorists awaiting trial and sentences of death by hole. But that would entail the militarization of the hole, something I was not readily comfortable with. No, I sighed, the hole should be used for peaceful pursuits.

I rounded up some neighbor's cats and started tossing them in, enthusiastic that they would never stop falling. I hurled in six cats with ease, enjoying a vibrant symphony of meows echoing up the hole. I started to throw a seventh cat in, but it spontaneously had six kittens matching the colors of the previous six I tossed in the hole. I threw all those in and laughed with joy at the notion of my magic hole's ability to bend reality to its whims. I even went indoors and found my missing sandwich back and as fresh as ever. The hole and I were on good terms again.

One day I spent half my paycheck on balls of yarn, which I tied together and lowered into the hole, wondering if I'd ever hit bottom. I could sense no end after lowing all that yarn in, and when I pulled it up the bottom five segments had tangled up to form the perfect shape of a sweater. I didn't wear the sweater because it was bright orange and purple, but I delighted in throwing it back in along with a garbage bag full of road kill I collected the day before to satiate my growing hole's appetite.

Fearing that people would become suspicious of my hole, I began covering it up with boards and dirt to hide it from prying eyes. The public was not ready for this great mystery, and more importantly, I was not ready to share. As big and spacious as the hole was, it was mine alone to hurl garbage in. I suppose the horrible smell of garbage had influence on my choice to cover it up as well.

Maybe in time I would open it to the public, charging admission and selling high priced souvenirs such as T-shirts with holes in them. Perhaps eventually I would allow engineers to build housing inside the hole, solving our over-population dilemma. Maybe even in time explorers could chart the unknown depths of the hole. The possibilities were endless, but limited to the future. I was not ready to commercially exploit this hole just yet.

One day after removing the cover to let the hole get some fresh air, I threw a penny in and made a wish. I wished the hole would give me some financial support since it was costing me a lot to feed and mostly only seemed to summon animals and insects, which were now making frequent pilgrimages to the smelly hole. I immediately checked my pockets, expecting a sudden non-fleshy bulge to appear. My pockets were miniature holes themselves, empty and bottomless. As far down as I reached there was no money in them. The hole had eaten my fortunes all the way down to my last penny. I had fed it such nice things, and it betrayed me. 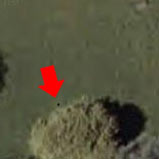 Possibe satellite view of my hole?? Frustrated, I put the cover back on and buried it under dirt. Unfortunately, in doing so I completely misplaced my bottomless hole. The next day I frantically searched all over the ground, trying to find the entrance to the hole in hopes of finally commercializing it. My search was in vain. I asked it to give a little back and it disappeared on me. My bottomless hole, hiding somewhere under a thin layer of dirt just to avoid paying me. I cannot tell you how crushed I have been since losing my hole, nor how many hours I've spent digging around my backyard and peering for black dots on satellite photos trying to find the magical void that offered so much. It is like the hole itself took on a new form, consuming me entirely with its absence.

Ladies and gentlemen, I do have an infinitely deep hole. It is inside my soul.