The Mythology of Tomorrow 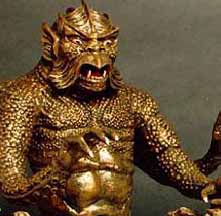 The Kraken can and will destroy your favorite city.When we think of mythology, we often think of forgotten deities like Zeus, Thor, General Zod, Maguila Gorilla, and Xenu. These figures represent the relics of long dead times and equally long dead and buried cultures. While the people who once embraced these gods as gods are dead and probably stuck in limbo being chased by bees endlessly, we still have much of their written texts, which strangely enough were kept in non-digital formats that render them near useless. While there hasn't been that much useful information to come from these ancient records, they have still managed to paint us quite a fancy picture. If not for violating the rule of thirds, this picture would be more than worthy of hanging in any bathroom or outhouse. The gods of old were quite an odd lot. Unlike the various characters of "Happy Days," who enjoyed a symbiotic and sometimes parasitic relationship with each other, most gods often fought and scrapped like soccer hooligans. Only instead of bashing each other's faces with blunt instruments and flipping over goofy-looking European cars, the gods often came up with really complicated and elaborate ways to bitchslap each other around. With all their feuding, it's no wonder they ended up deader than Bruce Willis' character in "The Sixth Sense."

Recently, as in a couple hours ago, I started thinking about what kind of mythologies will one day be associated with our current cultures once we die out. I'm not sure when we're going to die, but it's only a matter of time before an iceberg hits the Earth or we all simultaneously get swimmer's ear and then walk out in front of traffic only to be run over by some funny looking European car. Then, say a thousand or so years from now after the survivors (presumably the descendents of those who were driving those ridiculous looking European cars) rebuild and start looking to learn more about the past, what will they learn about us? What is our mythology? Do we even have one? The answer is a resounding and triumphant "SURE!" We sure do.

In the past, gods lived in places like Mount Olympus (named after the Olympus line of cameras). There was also Hades, which was kind of like Hell but only located in the popular European country of Greece. We may not have Mount Olympus anymore, but we have the Olympics and the Special Olympics, and those now take place in a golden land called Television. Well, at least the Olympics do. No one is going to waste film on the Special Olympics. A thousand years from now, future man will look upon our television archives and that will be our mythology. We will be remembered not as we were in reality, but as were on shows like "My Mother The Car," "Mr. Ed," and in movies such as "Robocop" and "Street Fighter: The Movie." On the surface, I wouldn't mind being remembered for Jean Claude Van Damme's performance in "Street Fighter: The Movie." He did very accurately portray Guile, the tough-as-nails army man competing in an international fighting tournament, even though the movie was kind of different from the game in that it wasn't very good. But I realize that the true gods will be those who appear to have the power to interrupt the flow of time, to divide and halt situations at a mere whim. I'm talking about commercials, and the actors and products that star in them. With that in mind, let's take a look at some of Tomorrow's Titans: 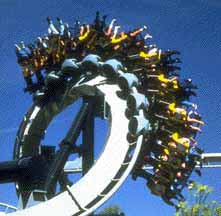 Batman: The Ride will one day be looked upon as a horrible torture ordered by the Gods. If you don't believe me, see for yourself by reading The Bible.

Batman: The Ride
One of the most terrifying vestiges of our modern world will be frightening visions of the official Batman roller coaster ride. The ghastly, unspeakable images of men, women, and children being hurled through the air around sharp curves and gravity-defying loops only to be plunged into maddening descents will haunt the people of tomorrow. The shrieking screams of Batman's victims will surely cause spinal shivers and night terrors. Much like a voyage down the River Styx or a drive through New Jersey, Batman: The Ride will be seen as a great and horrible peril. Perhaps it will even come to be known as the final journey taken by those who commit their lives to recklessness and evil.

Steven, The Dell Kid
Today we look upon The Dell Kid as the ultimate incarnation of evil - a vexing little goblin constantly trying to get us to partake of Dell and its meager offerings. A thousand years from now, some things may be forgotten but the understanding will not have changed. The mystery of the Dell will elude tomorrow's man, who will fathom "Dell" as being a kind of punishment. "Dude, you're getting a Dell!" becomes the equivalent of saying, "I hope scorpions poison your face off!" The father of this dreadful saying, Ben Curtis, will come to be looked upon as a vile and repulsive god and ruler of the abyss. Because of the painful stigma associated with all things Dell, the Wisconsin Dells will be declared the Forbidden Zone and no man will set foot there less he not wish to set foot anywhere else ever again. Not even with special prescription shoes.

Jarred, the Subway Jackass
We all know that Jarred, Subway's current subhuman mascot, is famous for losing a lot of body mass. He accomplished this highly respectable task by switching his diet. Instead of devouring ten-gallon drums filled with lard and animal byproducts, he chose to eat Subway sandwiches. Obviously, ingesting raw entrails and fat is going to make you rather portly, so it's not like he's some kind of genius. In the future, he definitely will be revered as a fool. Seeing as how Earth of 3001 will have scarce little food available, a man who would choose to eat less would look like the epitome of stupidity. Oh Jarred the Jackass, my how you represent the worst qualities of man!

Dave Thomas
Being that from the years 1876-2002 Dave Thomas appeared in approximately five hundred thousand commercials, he will be looked upon as the undisputed God of our world. Future man will see that Lord Thomas, through the image of his daughter Wendy, fed billions and only accepted small allotments of coins and paper in exchange for his divine service. They will know that he worked his miracles through the laws of taste, choosing only the finest meats and cheeses. While we, modern man, are still in a state of perpetual bereavement over the loss of Dave Thomas, know that in the future he will have ascended to his rightful place as a god. When it comes to accepting the gifts of Dave Thomas, may we all be remembered as having the courage to "Biggie Size It!"

There will of course be many gods and horrors born out of the television cesspool, and they will be revealed in time. For now, be thankful that they merely serve as entertainment for us. Also be thankful that the gods of old are dead. Otherwise, we'd have to live in constant fear that Zeus might order Poseidon to let loose the Kraken on all of us. If I've learned one thing in all my life, it's to fear the Kraken.

All around jerk Cakewalk is back with another Flash presentation, this one being quite possibly his least crappy. Actually, this is by far the greatest thing he's ever done! Why yes, I am referring to...

This is a somewhat epic game of mystery and intrigue where the slightest mistake could lead to death. Oh, and it has something to do with baseball. Play it, damnit.