Parents Across America: Let Thy Children Fall Into Wells!

Parents Across America: Let Thy Children Fall Into Wells! 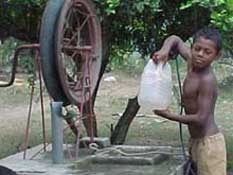 Oh silly Nimbuktu, water does not belong in a well; children like you belong in wells! Will you ever learn?

It's no secret that we, the citizens of America (if you are not a US citizen or are not reading this webpage, please close your web browser immediately and go do something else), are currently smothered underneath a blanket of fear. Yes, that's correct, an entire blanket composed of 100% pure fear, and I'm not talking about one of those cheapass quilts that drop little blanket hairballs all over your clothing when you get within a 90-mile radius of them. If you have turned on the television, listened to the radio, or generally haven't been dead in the past month, you're undoubtedly extremely aware that the national news media is swept up with "Abductathon 2002: Hide Your Kids From Murderers." Not a minute goes by when CNN doesn't have a "groundbreaking news report" regarding the disappearance or reappearance about some retarded child that was stolen away from their parents without prior written consent. The media has been reporting and tracking so many missing kids that I honestly believe 98% of children under the age of 39 are currently being held in some convicted serial rapist's basement. The other 2% of that demographic are the serial rapists themselves.

Now I don't want to say "I told you so" (mainly because I can't make this webpage speak to you unless you've been drinking mass amounts of tequila from a rusted bucket in your backyard), but I can't help but write "I told you so." I'm going to do that right now, and I'll put it in bold and italicize it and center justify it, just you watch:

I TOLD YOU SORTIE

Okay, so it appears I made a typo on "so" and my spellchecker helpfully changed the word to "sortie," but you get the point. In my June sixth update posted on June sixth by me, I pointed out that the current generation of children are not falling down enough wells. The media was obsessed with children falling into wells in the late 1980's, but now there's absolutely no coverage of kids falling prey to the evil lure of dark, empty watering holes. I feel that we, as parents, are to blame in this situation, and when I say "we" I mean "you" because there's no way in hell I'm going to ever have children unless we run out of food and Emily can't think of a way to get any after the next nine months. Now if you parents would've taken my advice and tossed your stupid kids down a well like I advised you to, we wouldn't be in this "18,124 Kids Kidnapped In Southern Georgia Alone" crisis we neck-deep in today. You know it's bad when even the media is commenting on the saturation of news stories that they themselves are propagating:

Marc Klaas: Missing children merit media hype - In recent months, [there has been a] a string of child abductions beginning with the kidnap and murder of little Danielle van Dam. Then, the still-unsolved kidnapping of Elizabeth Smart, the kidnap and murder of Samantha Runnion, the kidnap and amazing escape of Erica Pratt, and then, of course, this past Friday the abduction and murder of Casey Williamson. Are we seeing a sudden outbreak of children being abducted, abused and murdered? Or is the perception the result of a greater sensitivity by the news media? 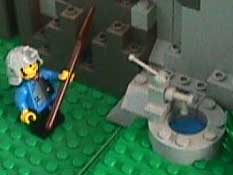 Even the ancient tribe of Legomen believed in the mystic healing power of the well, as shown here in this exclusive photograph courtesy of some retard with a camera.

Hey, here's an idea CNN anchor Paula Zahn: why don't you ask your goddamn boss this question instead of us? You guys are the cretins up there shoving child abduction after child abduction story down our throats, if you don't know why the hell you're doing it, how could we? Regardless, any responsible parent would've taken their kid, picked them up, and tossed them down a well months ago like I advised. Take a look at the advantages of having your child trapped at the bottom of a well:

1) No kidnapper can get them. Hell, even firefighters and police with machineguns and attack dogs can't get them! Now some of the smarter criminals out there may be thinking, "well heck, all I need to do is throw myself down the same well and I'll be able to kidnap them!" No so fast there, buster! There's no way for a criminal to get out of a well, even if they have a very long ladder (assuming it's not long enough to get out of the well). By depositing your child in the bottom of a well, you are 100% guaranteed that they will not be abducted while rotting down there and crying their filthy eyes out. It would be irresponsible to not hurl your kid down a well!

2) You get to be famous. Various news vans will drive over to your house and park on your lawn simply to interview you and ask the same questions over and over. You will become an instant celebrity, ranking up there with that one guy who threw the dog out the window of his car while driving. The media anchorpeople will run up to you and ask groundbreaking questions such as "do you know anything new about the status of your child?" and "is your child still in that well?" and "we couldn't help but notice your child is not currently here, where do you think your child is?" Then you just have to sob and say, "I just pray to Jesus every day and all I can ask is for everybody else to say a prayer for my little Bobby." This is, of course, assuming your kid's name is Bobby; if it isn't, feel free to refer to them as "Susan."

3) The only method of communicating with your kid will be through short-wave radio; he won't be up and in your face every minute of every day. You won't have to worry about him taking Magic Markers and scrawling the phrase "ASS PUPPETRY" across the livingroom wall, you won't have to fear him setting the dog on fire, and you won't be bothered by his constant whining and moaning about wanting to eat or sleep or do whatever kids want to do these days. Kid-In-A-Well is the best solution for you parents who believe in a Laissez faire type of parenting, a style that is much more socially acceptable than stamping a "PROPERTY OF" mark on their foreheads and then setting them loose in a strip mall parking lot for the next few years. Plus you get to drop a short-wave radio down the well and onto their head.

The negatives of throwing your child down a well are too small to list but I will attempt to do so anyway since Something Awful is know for its objective and well researched articles that are 100% based in truth and reality and are not at all influenced by the amount of prescription medication we consume. Before correctly deciding to dump your kid in a well, please take this potentially objectionable points into consideration:

1) You could mistake a funeral plot as a well and then somebody might try to sue you for attempting to bury your child alive.

2) Your child may be abducted en route to the well, in which case you'll have to throw both the him and his kidnapper, a full-grown person, down the well. This will require a lot of upper body strength, particularly in the labiatoid-deltron muscle groups.

3) I can't think of anything else.

It is with a humble heart I do reach out to you parents across this great glowing nation and cry out, "parents, let thy children fall down wells!" You've got nothing to lose but countless headaches, and you've got everything to gain. More importantly, I don't have to keep on reading about these goddamn child abductions anymore and the media can go back to telling me how I should feel about various movie stars marrying each other. And isn't that what life is all about anyway?

Cyberpunk fiction has long been one of my favorite genres to read for pure pleasure. Unfortunately, I'm having to dig for increasingly obscure titles in the genre to avoid the explosion of shitty cyberpunk that has transpired since the late eighties. To save you the trouble of reading any of this crap I have compiled it into a single store for this week's SA Story Time. It is entitled "Do Clonal Yakuza Assassins Dream of Vat-Grown Sheep?".

Dare took a sip of his sex on the beach and leaned back in the battered Taiwanese barstool, his mirrorshades reflecting a huge holographic advertisement for NanoFresh feminine hygiene pads. "For your high-flow days," chirped the ad, projecting an animation of robots shooting lasers at red blood cells.

Then she walked in. He had hoped he would never see her again, but there she was all hip-hugging vinyl and crimson lipstick. The golden tipped Geocities jacks on her temple shining like a polished diamond that had been glued to her face with three-bond polyadhesive. She just looked at him for long seconds, their history an accretion of lies and longing between them. Dare took one last sip of his sex on the beach, draining it to the ice, and thought that she looked odd not wearing her Turkish Express uniform.

If you're a big fan of cyberpunk like me, I hope you find this week's SA Story Time to be a huge money saver when it comes time to choose your next book!