Going Towards the War In the Easts 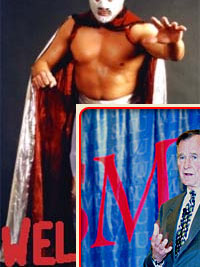 I had some problems with the pictures and crops got out of controls so I am sorry for that. President George Bush is in the insert pictures.Today is being "Laborer's Day" in America but not in Mexico, which is laborer's day at all of the times. I am making to tell you this on the reason that Something Awful writers are taking days of relaxation on this Monday even though I am writing this on a Sunday and this is because of "Time Zones". In America the writers are cooling off their heels in the refrigerator of hard work to celebrate the laborers of love and give thanks for the colonists or things like that, I am not knowing these all-the-time crazy American holidays. One person who is not resting is American President George Bush, he has a lot on his mind and it is right now full of thoughts just like Yours Truly on the nights before a big match with a maximum rudos opponent.

This opponent has been big time news appearance king of the ring and its name is Nation of Iraq. President of America George Bush is ready to go toe to toe with entire Nation and Peoples of Iraq and their evil ruler The Sandman Hussein.

I have not even heard of this countries in the Easts but it is obvious from news reports that it is major problem starter in areas and always causing the troubles for America, friendly neighbor towards the North. Then I am hearing that strategies of combats with Iraq are not going to be talked about and President of America Bush might not even tell it to the Senators of Congress because lips sink ships. I am not knowing what kind of blubbermouth is giving away combat strategy to news but it is happen and it can't not happen again! Don't tell them secrets tactics President of America.

To help the President of America George Bush I have put into a still and made potent cocktail of my combat knowledge for him to use. This is way there are many choices out there on the table for him to be selecting from like delicious fruits in the grocery store of battle. No way can Senators of Congress rain on your pageant because how will they know which is fruit you are selecting for shopping basket? They can't! That is how! Just like Yours Truly can't go into a grocery store and smile at pretty lady with cart and say "miss you are going to buy a pineapple and three coconuts!" and she will say "Well I will be! You sure guessed my list it is like you see through the doors way into my mind!" It is not likely!

Look out Sandman, your days have been numbered!

Strategies One: One-Twos Punches From Orbits! 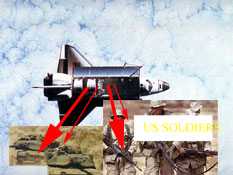 After troubles getting crops to work I kicked the computer and tell wife to come in and make image and I think she is doing much better jobs of it. Here is her images to show soldiers and tanks of United States coming out of space shuttles.America is being known for having an iron hard headhold on the distant land of space, with uses of satellites and rocketry and the infamous space shuttles. These are like powerful jets that are so much more powerful than other jets that they are going into space and coming back and landing. This could be America's keys to victory and in my plan called "One-Twos Punches From Orbits!" I am making proposals that the space shuttles will bring a special delivery of trouble to the doorsteps of The Sandman.

Let me being to pose a question to you readers, how often are you looking up at space? Never! You look around all the time, at trees, friends and neighbors, enemies, different sizes of cars, but none of these things are up above you in the space so you never bother looking up there. Maybe if you heard on the news that there was going to be a meteor hitting earths then you might look up at the space sometimes but still, I don't know, you might be more worried about getting run over by a bus than getting hit by a meteor. I guess it depends on the size of the meteor. There was a really fat wrestling-type named Meteor Ike and his trademark maneuver was the Sumo Splashdown which he made to steal from Sumo Ray and was renaming to "In Traction Level Event" which I am thinking is not a good name for a trademark maneuver. 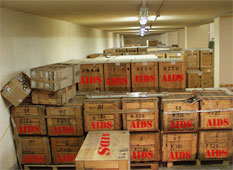 These are crates of Foreign AIDS to Bosnia who was defeated by United States of America in the battle of Serbia.One of America's most powerful of the weapons in any war is the Foreign AIDS. No one knows where it comes from, it is a mysterious and shadowy tactic, and then the Americans send it down in crates and attack the peoples who tear open the crates thinking "this is some food" and instead say "oh no I am dying from this mysterious disease". I've seen pictures on the news station that sometimes Americans are making it look like food inside but it is food made out of poisons that give the population the cold shakes and the head's ache that sends them reeling to the ropes. I am not knowing if Yours Truly can approve of this tactic as it is rudos in the extremes, but I am just putting it out there so you have this option and if you don't take it The Sandman will still have to tell his armies "DO NOT EAT FOREIGN AIDS!" and they'll be worried about it. It is good to be crafty in a tight situations like this one. 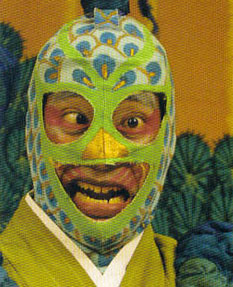 Long time friend Hawaii Fight-O is out of work and cruising for a bruisings to The Sandman in Easts.Good friend of Yours Truly going by the name Hawaii Fight-O has been kicked out of the matches for one years time without the pays. This is causing by the facts that Hawaii Fight-O attempted to beat opponent unconscious with a live baby, but it is his baby so I say "do with it what you please" but the rules do not have this written in them and beatings with children under ages of three are grounds for one years of suspension. The without the pays part is what is causing long time friend so much troubles at his home life and his wife is spend-crazy at all times but the bank account is dried up.

This man is so talented and his wife-type is so spend-crazy that I am saying President of America Hawaii Fight-O is right man for job of defeating The Sandman. He is very unpredictable and not just in matches where he is beating opponents with the infant-types, also when he is entering ring dressed as horse which is dressed as referee, and he is one time putting glue on middle of ring and pushing opponent into glue. This is the kind of mans you are needing to get the jobs done that need to be done right. You just put the parachute on his back and drop him onto the house of The Sandman and he will issue an offer that The Sandman is not refusing, like maybe mask match or a girlfriend match but if it is girlfriend match you have to drop in his assistant too. I don't know how expensive a parachute is being but I hear they are made of the silk which is as expensive as gold but you can't make a parachute out of gold unless it's real thin and this is too much effort.

Hawaii Fight-O will then disgrace the boasting rudos The Sandman in a one-on-one match up that will leave his regime of the evil in some serious tatters. Maybe if he is good enough Hawaii Fight-O will be elected presidents of the Iraq and he and American President George Bush will go to the United Nations of America and have a conversation about hats in French or whatever it is that is being talked about at important UN of A meetings. This will also save lots of electricity for States of California because each soldier who is going over to other country is using up to the five ohms of energy. This is a lot of power! With just dropping the wrestler sensations Hawaii Fight-O into Iraq you are saving a lot of energy because he is only using 13 ohms or 19 if you are sending assistant too.

These are the three strategies I am suggesting for the President of America Mr. George Bush. I think I have many more strategies if you are interested in contacting me on the computer pages I will go into the details about them. This is for president George Bush of America, also I would like to have honorary citizens of America rights so I am not getting such the hassle every time wrestling show goes to the north of the border.

Thank you mister president for reading this story in the Something Awesome computer book.