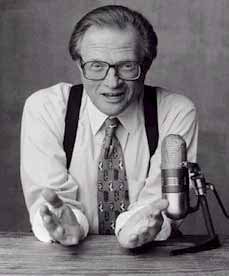 Larry King and his trademark microphone phallus.Like all mummies excavated from an ancient Egyptian tomb, Larry King carries a curse. No, you won't die if you have the misfortune of breathing air exhaled by him, although you will certainly wish otherwise. Larry King's curse is far more torturous and bizarre. His epic voice, which echoes the sounds of the spirit world mixing a delicious fruit drink in a blender, will cause your ears to ring with fear and trepidation. When he speaks to you, your brain will tremble and skip like a broken "Alvin and the Chipmunks" record or a little girl playing hopscotch during an earthquake. If he doesn't turn your spinal column into slime with his hard-hitting questions, his deep penetrating x-ray stares will expose your true colors to him. You can't really look away from him, either. Those Medusa-like suspenders coiling around his torso will enchant your attention, turning your neck muscles into unmovable stone. But that's just his general nature. The actual curse I mentioned is a little something Larry does in his spare time.

I'm talking about "King's Things," Larry King's regular column of random thoughts. If you aren't familiar with this hellish exercise in mind abuse, Larry basically writes down a handful of random and insanely asinine thoughts that should never have escaped the mud encrusted walls of his skull. The thought process he goes through must be quite fascinating and disturbing. I guess after Larry staggers out of the iron maiden he sleeps in, he will think to himself, "Al Pacino's latest film is filled with great performances!" I've noticed he spends an inordinate amount of time thinking about Al Pacino. He doesn't just comment on matters of entertainment, though. After he drinks the last sip of his homebrewed immortality elixir, made from a mixture of opium, shark's blood, and minotaur ovaries, he will suddenly wonder "do people still do jigsaw puzzles?" Why in Thor's name you would even care is beyond me and probably even beyond Thunderdome. But Larry will not just think it, he will write it down so that it can be published for millions to read.

Sadly, I'm one of those millions. I've been reading King's Things for a while, and I feel as if though I am becoming dumber as a result. Why? Almost every comment of his is strategically designed to make you think. The only problem is that they are stupid comments, and so you end up thinking about stupid things. I could have gone the rest of my life without ever thinking about jigsaw puzzles, but now I'm constantly wondering if jigsaw puzzles truly are dead. Have I witnessed the Twilight of the Jigsaw Puzzles? I certainly hope not! Then I wonder, maybe he means that the world is a jigsaw puzzle and we are all puzzle pieces. But if we are puzzle pieces, are we in control of ourselves or are we pawns in a high stakes game of jigsaw puzzle that features a picture of a chessboard? Damn you Larry King, you've broken my brain. 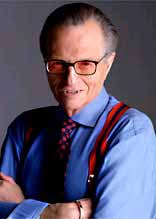 You cannot look away, for your gaze belongs to me, Larry King of all Earth!Larry King's style seems to be to either say something incredibly stupid, something incredibly obvious, or kiss the ass of a celebrity. It doesn't really matter what he says, so long as it's short and instantly causes the part of your brain that handles logic to explode and then drizzle out of your nose. He's perfected the Two Sentence Kill, so reading King's Things is extremely lethal. Let us take a look at a couple of King Larry's most recent musings.

It didn't do well at the box office, but Al Pacino's new film "Simone" is certainly worth your viewing. His performance is terrific and the storyline is a wonderful Hollywood satire

Given that Larry's already made out with Marlon Brando on his show, I don't see why he just doesn't invite Al Pacino on his show so he can finally fulfill his savage civil war rape fantasy and claim Al as his virile ebony-skinned sex slave. Yes, I know Al Pacino isn't black, but this is a rape fantasy so those kind of details don't matter.

Why do UFOs only visit remote Wyoming and farms in the dark woods of North Dakota? What about landing in Times Square or near the White House?

Good question, Larry. If I may, the alien pilots of these UFOs are busy racing against the clock to find out if people still do jigsaw puzzles. They must figure that rural America is the better place to search, since those who live in urban areas have clearly forgotten the importance of jigsaw puzzles. I'm sure once they crack this caper they will report their findings to Washington, D.C. so that the government can take appropriate measures to preserve the endangered jigsaw puzzle.

I'm definitely not Larry King even if I do try to pick up underage girls in chatrooms by claiming otherwise, but I'm good at serving no purpose and writing stupid nonsense. With that in mind, I'd like to try a bold new experiment in terror. Actually it's not that bold, even if I did bold the text. That was just some clever psychological trickery on my part! Because I'm a forecaster of the future, I predict Larry King's next column will look slightly more retarded than this:

If God gave us the telephone book instead of the Bible, would people kill each other over area codes?

I imagine that if there was ever a political debate on the surface of the sun, the discourse would be heated.

Instead of sending Lance Bass to space, maybe it's time the media gives him some personal space.

I think Americans have given up on the potpie.

Why aren't people climbing trees anymore? Are they afraid to find out what's up at the top?

Ever since I was a kid, I've always glanced at Italy whenever I'm near a globe.

For as long as I live, I'll always think fondly of optical illusions.

I think people would be fonder of cactuses if they didn't have so many pricks. Could you not say the same about Major League Baseball?

No matter how many times people try to tell me that it's wonderful, I still don't see the need for scenery.

Take that, Larry King! Larry King Live? More like Larry King Dead! I sure hope you've enjoyed this. I know I haven't!

The always ethical State Og has returned with a new monthly report (the first in months!) unveiling the latest line of products for sale!

Howdee hay and daily ho to you fine folks on this beautiful Wednesday, August 28th! State Og is once again back to serve you the hottest (non heat-related) and most hot (heat-related) products since 1852! After numerous failed attempts at shutting down our popular and consumer-oriented product divisions, the United States government has finally admitted defeat and we're back on the fast track to helping you, the consumer, consume our hottest (perhaps heat-related) and most hot (definitely heat-related) products! That's right, we've once again bested the American government in their own court of law, proving that one man with a dream and a multi-billion dollar legal team composed of Harvard graduates and mindless titanium attack drones, cannot be stopped once he puts his mind and army of cyborg ants to the challenge! Hang in there and one day you too will have your chance to shine in the spotlight, preferably not the one that picks out people attempting to escape from prison.

Put your money to good use and take a look at some of the great products for sale. It's not like you do anything good with your money, anyway. Really, I read your credit card statements.