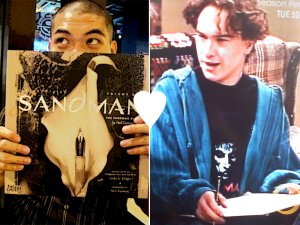 My friend Scott and I are at a Neil Gaiman reading. We're both huge fans of Gaiman's comics and met because of them at the library. I was carrying the hundreds of mythological texts required to understand the latest Sandman, when I slipped a disc and fell. Scott took me to the hospital, after a lengthy argument over whether my injury was Kafkaesque.

"Remember the last Neil Gaiman reading we went to? I don't because of all the absinthe we drank."

"That was just radiator coolant I found in a dumpster."

I sigh, my non-memories of that night tainted forever, and try to think of something else to say.

"I love the intertextuality of Neil Gaiman's comics, because taken to its logical end it means that any text related to Sandman is canon, including the text conversations we used to have about how much we liked Neil Gaiman and each other."

Scott ignores me, pretending to text on his phone even though it's broken and shocks him every time he touches it. He involuntarily smiles when in pain, but he isn't smiling now, meaning the shocks are a blissful distraction from talking to me.

It's hard to say when our friendship started to fall apart. Maybe a couple months ago when I asked Scott if he wanted to be more than just friends - specifically, if he wanted to be best friends. He said he'd think about it but hasn't gotten back to me yet. Since then our lunches have been awkward; the last time, when he vomited from Burger Hub's cadmium-tainted glasses, we just silently watched his vomit dry for 20 minutes.

The audience at the Gaiman reading is full of goths. I used to dream of being in an industrial band and getting famous enough that I could guest star on the show Oddities. The script would just call for me standing in an empty room for half an hour, because my band has increased tolerance of alternative culture so that gothic kitsch antiques are no longer considered odd.

I was briefly in an industrial band but we broke up after an argument with the drummer over the smell of the dead squirrels he used to dampen his kick drum. Standing in our old practice room I can still hear all the keyboards we smashed during our signature song "I Wish I Had the Key to Your Heart so I Could Break It off in the Lock," and also all the ones we didn't. I think of telling this story to Scott but figure I'll save it for the ride home when our reflections in the car windows look like a multiverse of friendships of which ours is the unhappiest.

I need to go to the deathroom. I call bathrooms deathrooms because they remind us of our mortality through all the hygienic routines with which we fight it. My fear of bathrooms has made me resort to doing my business in post boxes. In a fantasy I meet another person defecating in a post box and we become best friends, leaving Scott to die alone. 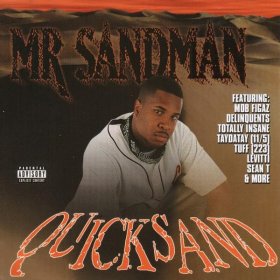 The flipside of this fantasy, of course, is the nightmare that I'll die alone. In it, I'm lying in a hospital bed on life support when the door opens and the Fat Boys walk in, reprising their roles as the bumbling nurses from Disorderlies. They mistake me for another patient on whom they're supposed to perform a chondrolaryngoplasty and take out some surgical tools. I scream but all that comes out is a gurgling noise that sounds like some wack-ass MC trying to beatbox, so Darren Robinson takes the mic and freestyles all over me using the heart monitor as a beat.

My mp3 player is playing Evelyn Evelyn's cover of "Love Will Tear Us Apart." Amanda Palmer and Jason Webley croon in opposite speakers like best friends seeking each other through the tangle of absinthe-decayed neurons in my head. Once they did almost find each other when lightning struck my mp3 player, turning my headphone speakers into powerful electromagnets that nearly crushed my skull.

Neil Gaiman still hasn't arrived yet. I stare at the curtain like I do a post-box slot when I'm vomiting from the opium I smoke to fully appreciate Sandman comics. Wondering what's beyond it and if it's any better than this.