Tuesday, Jan 20, 2004 by Cliff "Cliff Yablonski" Yablonski
Know of an awful site? Send it to us and become a hero!

Merlin's Kingdom, submitted by Roland. I like naked broads and their boobs. I like naked broads so much that I bought this calendar which shows a different naked broad every month. I tore off all the pages with the dates and shit because who gives a crap about days in the week, I just want to see women with big boobs so I can shout at them and tell them to fix my clogged toilet upstairs which hasn't worked since the mid-80's. I thought that the tank was busted at one point in time, but I did some tests involving a pen and Greg Habanero's head which proved otherwise. "Merlin," the twisted ballsack who runs this dump computer webscreen, apparently enjoys seeing crappy drawings of naked broads punching each other because he's got about a million drawings of this shit here. Am I supposed to get excited over this crap? 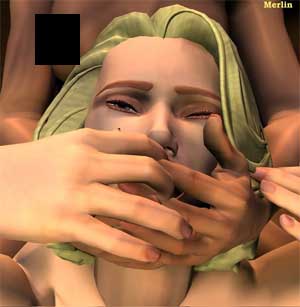 The WCF also hold boxing matches, which are often savage. Being a good wrestler doesn't always mean that a woman can box as Victory, the WCF Champion, finds to her cost in her match with Scorpia.