The Next Next-Generation of Consoles

Now PlayStation2, Xbox, and Gamecube have all launched and the new console war officially begins, I guess. Doesn't effect me much, I can't afford any of them right now and will have to survive on closeout Dreamcast games. Oooh, Blue Stinger for $4.99! 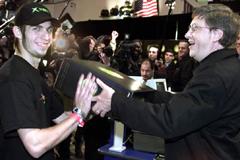 No thanks, Mr. Gates! You can take this Xbox and shove it up your uni-nostril. Try giving me a call when Xbox 2 is ready!

But I've got it all figured it out, you saps. I'm just going to bide my time and wait for the next next-generation of consoles. Sure, you think your Gamecube's are pretty hot stuff right now, but just you wait. Go right ahead and waste your money on these soon to be outdated hunks of puke, I'll be sitting pretty in the middle of my state-of-the-art gaming paradise with the latest and greatest while you slog through your pile of old, jaggy PS2 games looking for the tissue box so you can dab away your tears of pure embarrassment and jealousy.

The better the graphics, the better the gameplay. You want to know what the best gaming system is right now? It's a Silicon Graphics X4080 with the D-Spec Memory package. That thing pushes over 9 billion polygons a second, Xbox only does… I don't know, 10 million or something. I've got 9 billion. And Xbox 2? PS3? GamePentagon? They'll probably do like 55 billion, so the games will be approximately 60 times even more fun. Plus they'll all have Internet-2 compatible wireless network cards, holographic projection, and virtual sex capabilities. Oh man, I'm going to laugh so hard when you're playing Crazy Taxi 3 on a flat screen while I'm playing Crazy Taxi 4 holographically while virtually banging your sister's best friend's second cousin.

Why bother getting any of these new systems? As soon as better ones replace them, they'll stop being fun. Look at Atari 2600, NES, Genesis… they're all out of date, so none of the games are good. I was playing Dreamcast yesterday and Soul Calibur seemed far less fun now that Dead or Alive 3 is out, I mean the breasts in that game are just so more realistic. Games like Street Fighter II and River City Ransom? They're spit! Give me a break, GamePentagon will be 5480-bit!

Then again, maybe I'll just wait for PS9. I saw a commercial for that, and it's going to rule all. Suckers!

The events of September 11th were a godsend to all those crazy apocalypse conspiracy religious freaks UFO people out there, since they could all finally say, "See! I told you so! I predicted it! The prophets were right! I told you God was pissed!" and feel good about themselves and their deluded, wasted lives. While I was going through some old Awful Links of the Day, I came across The Warning of the Second Coming site. I gave the site a visit and they hooked me up with the truth about September 11th! It's just too good not to share!

It is irrelevant who the terrorists were; they were hired and "programmed" by the Illuminati UK-US Committee of 300, the secret government that rules this world.Such terrorism is not normal human behavior, but rather, programmed behavior.This document will sadly prove that the Manhattan Tragedy et al. was planned bythe Illuminati (top Masons) before the Towers were even built. Further, they were built specifically for the tragic and DIABOLICAL events of September 11, 2001.

Masons? You mean people who build stuff using bricks? I knew it! Bricks are just too damn sturdy. Have you ever tried to move a brick building using your telekinetic powers? It's impossible unless you have alien floating rods to assist you in finding vantage points! Obviously bricks must be some sort of secret government technology stolen from the mole people that live in the center of the earth next to the molten core of demons during the resurrection of Jesus's brother. 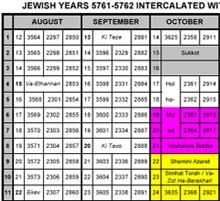 Don't you see… DON'T YOU SEE?!? It's all so clear! I sent the full 400 page chart to the newspapers but they refuse to publish it because only I know the truth!

As for the twin towers… golly, gee! I always thought they were built to provide office space, but I guess they were specifically designed to collapse like folding chairs when struck by planes that hadn't even been invented yet. I bet it even says as much in those secretly classified blueprints! And come to think of it, weren't these so called "twin towers" (if there were only really two) built with metal… and not brick? Of course, why would the Illuminati want to damage their own materials!?

Later, they follow this statement up with some stunning numerical "proof:"

The Templars were recognized at Clermont in 1118; add them : 1+ 1 + 1 + 8 = 11.The year 2001 was their 883 anniversary. In the number language doubles may beeliminated; 883 = 83 ; add them 8 + 3 = 11. The authors of Holy Blood Holy Grailprovide the definitive evidence that there were 9 original founding Templars andthey first banded together in 1111 taking no new members for 9 years. And thiswas the numerical basis of the 9-11's in the US tragedies as follows:

The symbol of the New World Order is the Pyramid on the Great US Seal. In turn, that Pyramid is a replica of the largest of the 3 Pyramids of Gizeh, Egypt. These pyramids were aligned with the star Sirius (a double star) in the constellation of Orion, the Warrior Hunter, which represents Osiris, the god of the underworld. At the time of the first attack on the Tower, Sirius was approaching the 33rd degree over the Gizeh Pyramid, and 33 is the numberof death, based on the 33rd (3 x 11 ) Masonic degree rendered INRI, the exact same acrostic found on the Cross which bore the Son of God who died age 33.

AH HA! It all makes perfect sense now! Those… uh… secret government people! They sure are crafty! And craftsmen to boot! They're probably spying on me right now! But if I rub myself with NON-NEW WORLD ORDER BAKING SODA (which you can order from me for $49.99) on the 6th day of every 7th month TWICE (6 + 7 - 2 = 11) I'll be safe from their prying eyes.

Then, out of nowhere, there's this:

Understand please that George Bush Sr. and Margaret Thatcher attended a secret Conference keynoted by Gorbachev (Fairmount Hotel in San Francisco) on Sept. 27of 1995, where it was decided that the current world population of 6.5 billion must be reduced to 900 million.

Wow, talk about a tax cut! Hmmm… perhaps by "tax cut" Lord Bush really meant "mass murder"? That would explain the hundreds of secret concentration camps located in America and a huge secret human processing facility located in Alaska (I read about these concentration camps, among other places, here). I always knew Margaret Thatcher was up to no good! I mean, it's so obvious: she's a WOMAN and she's from ENGLAND. The connection to Nostradamus is so obvious that I don't even need quote the particular link to his quatrain and Holy Scripture.

Oh wait, those refund checks the IRS sent out! Did anyone happen to notice that Anthrax started showing up in the mail shortly after those checks were sent through the very same postal system? By cashing those checks, you've signed your death warrant! Your entire life is only worth $300 to our shadow government!

Remember, gentle readers: if you read it on the Internet it absolutely must be 100% true, accurate, researched and verified by unbiased third parties with only the most stringent journalistic ethics and training. I mean, it's not as if any mental hospital escapee can just type out thousands of pages of gibberish and post them on the Internet from a library. This is the Information Age, for crying out loud!

Semi Automatic Turban sent me this email, explaining that I had apparently forgotten to mention one of their new songs last week… or MP3.com was late in adding it… I'm not quite sure what they want but I better mention it since I don't want to get them upset:

Stop depress! Of last week we many thanks for cultured praise, however of there is mistake of mp3.com part which is not of happy! Yes there was a two new song ditties which you did of proclaim, but in real there was third of special! We say excellent for those who say that we have all three and you are the those! This is the new song for slap knew purpose:

"Owl Master Mine" - This is a song for those who dig treasure but for whose share of loot? We hope to answer this questions and many others. Yes punishment is carried out but this is how the homeland enjoys. Thank praise for you and your elderly peasuits!

Umm, well, "Owl Master Mine" is certainly… different from their other songs. Not, you know, good, but at least there's some kind of structure. I think. Just listen to the damn thing, and if anybody can figure out what the hell language they're speaking, let me know!