"If there ever was a collegiate Englishman, it was Gibbonman. Professor, read frequently, married an insane woman. He was always writing stories about an idiotic bear that's clearly a stand-in for another professor, and whatnot. And he wore a lot of tweed. He started that, you know." - Quixus Ablebody, A Tailor's Vertical London 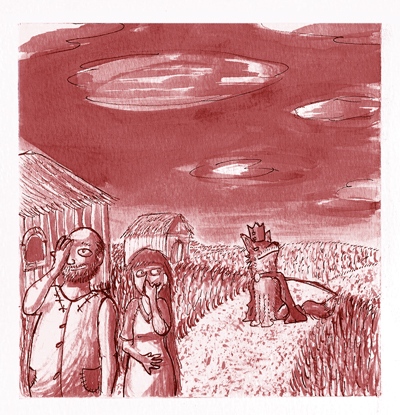 The farmer's wife whispered to the farmer "Here comes the king!" Then she tittered. For up the path to the little mountain farm came presently a fox, his gait long and regal, his nose held high. A paper crown and a tattered cape rested upon him in the noblest possible ways.

"Yes, yes, I am the king!" proclaimed the fox. "And furthermore there shall be a tax upon the raising of hunting dogs!"

"Indeed!" mocked the farmer. "And certainly that tax shall be collected in voles and rabbits! Ha ha!"

The fox king did not laugh. Instead, with but a whisper, his guards were upon the farmers, tearing their throats with halberds for their transgressions.

The moral of the story is: Be wary of kings in kings' clothing. 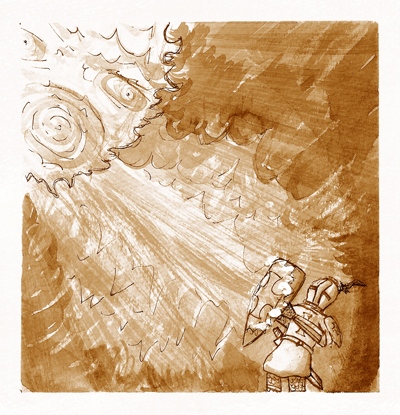 A knight came to stop at a little stream that tumbled through a great valley. Summer was upon the land, and the heat wavered from the stones, but as the knight's horse drank thirstily the knight could find no shade in which to rest.

"I have suffered beneath thee for days upon days!" the knight called out to the pale blue sky o'er him. "Has not the famous and celebrated Sun a kindness for travelers at his doorstep?"

"What ask you of me, sir knight?" replied the sun, its words like gusts from a furnace onto the plains.

The knight, who cleverly hid behind his shield as the sun spoke, called out in reply.

"Shade! I request only shade from your eminence!"

"Shade!?" bellowed the terrible fiery voice. "What is shade?"

The knight stopped, unsure of how to explain such a thing to the sun. "Uh ... well I guess you've never seen it, huh? Everything you see is ... lit. Hmm." By now the coat of arms on the knight's shield was beginning to crack and bubble from the waves of incredible heat it struggled to hold at bay.

"Generally I make things brighter, or hotter," belched the sun. "If you want either of those, I could ... "

"No!" Interjected the knight. "I mean, no thank you, that's fine! Forget I said anything!"

"Well, alright," rumbled the sun hesitantly. "I'll be on my way."

And so the sun turned and rolled away, over the horizon, leaving naught but the night sky. As it had been noon only moments before, the knight became very nervous.

The moral of the story is: Never ask for anything if anything is listening. 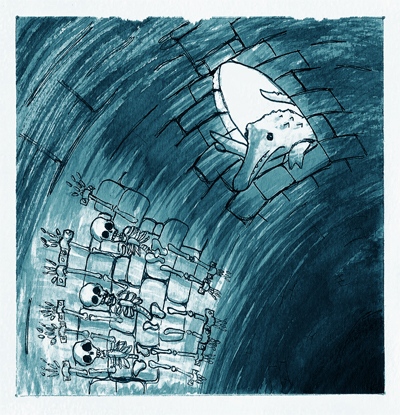 While tidily about his business in his slow river home, a crocodile came across a patch of moss he had not seen before.

"Disgusting!" said the crocodile, his nose thrust high. "I can not abide such a mess in my home!"

With his great clawed feet he scratched at the moss, revealing old stone beneath it. The further he scratched, the further the stone was revealed, and soon the crocodile had uncovered the oddest sight: the long tumbled ruins of a tower of old.

As the moss receded with each tidying swipe, the crocodile unveiled a window at what was once the top of the tower. He poked his head inside neatly and called out.

"Whoever made this mess in my river shall hear a thing or two from me!"

In the darkness of the tower, the crocodile could barely see, but as his eyes became accustomed he saw the culprits. Three skeletons, bolted by manacles into the stone, gazed miserably at him.

"God!" moaned the skeletons. "God has come for us!"

"We must be tidy!" chided the crocodile.

"Why have you forgotten us?" moaned the skeletons. They strained with ancient clatter against the creaks of rust. "Let us die! Let us die!"

The crocodile flipped his tail goodbye, and with a final "tidy!" turned and swam away.

"What an oafish thing, to dirty the river!" said the crocodile as he basked on the riverbank. "God was right to forget them".

The moral of the story is: God only sees people who die outside.

Ian "BFM" Helm not only writes and illustrates Gibbonman's fables, he also ... I guess that's it, those two things.