Zack chooses his own military adventure

In the Army Now 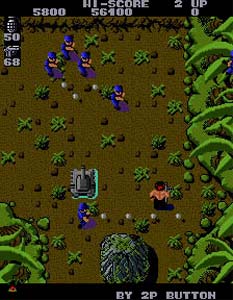 The enemy have a superiority in numbers, but American training and technology can win out.In case you don't know already, America is at war. Not the same kind of exciting videogame war we were involved in during the early nineties, where we got to watch bomb after bomb drop through windows or slam into tanks. This one is a war of America's military elite versus a rag-tag bunch of evil underdogs. I'm not sure if you're supposed to root for the underdog even if they're evil, I'm certainly not rooting for those assholes. Things seem to be going pretty good right now, but even the most optimistic of us are beginning to see that things could turn ugly at any moment and for a very long time to come. With that in mind of been dusting off my selective service card in preparation for my possible entry into the United States armed forces.

If they're going to make me shoot stuff I want to do it on my terms. So I busted out the hundreds of pages of recruitment info that hits my doorstep every week and started going through it, shopping for the kind of soldier I want to be. After all, it is my Army! My Navy! I pay for that thing with my hard earned - no, my life is a horrible lie and I evade taxes like Chow Yun Fat dodges bullets; with a flock of white doves flying behind my head in a church.

According to the pamphlet "The Army of One: We're going to give you a gun so big and expensive you can take on a whole other Army" there are a number of options available for me in the Army. There were also a number of facts about the Army that I was not aware of, it was really an eye opening experience.

Upon completing basic training you will be issued a combat knife and sent directly out on a solo mission deep behind enemy lines.

You may find better weapons during the course of an operation, in which case you are authorized to run over and stand on top of them where they will be absorbed into your feet and appear in your hands. Bullets, grenades, rockets, and rations all function in a similar fashion.

Because of ethnic and cultural differences, enemy soldiers almost all look the same. If they have a role other than shooting a rifle their uniform will be a different color to reflect this role. In accordance with the Geneva Convention all soldiers who are especially difficult to kill will wear red uniforms to give you fair warning.

The arrival of enemy vehicles will be heralded by music that accompanies their slow movement into view. All enemy vehicles can be destroyed with any weapon provided you target a key weak point and attack it enough times.

Heavy weapons such as a machinegun or a rocket launcher can only be carried by very large and fat men.

If assigned as an officer, when looking at your units from an overhead view you will notice that they somehow appear as large as tanks and other vehicles.

As a commander, you will be given only a few troops at the outset but you will be able to harvest resources such as iron ore, gems, and wood, to build more and better units. Be sure to build a structure that produces 5 soldiers a second and send them out in an unorganized fashion to die by the hundreds. These "people factories" are apparently approved by the United Nations.

Someone who you trust, either a senior officer or a fellow grunt, will betray you and actually work for the enemy.

If at any time during the mission the president or one of his family members is kidnapped, you will be sent in by yourself to rescue him. See the first item for your equipment list.

There is absolutely, positively, 100% NO WAY TO DEFEND ANYTHING. If you are forced to defend an outpost, barracks, or base, you will fail. Mankind has yet to come up with a way to defend anything from an army with combat skills similar to most girl scout troops.

If you are operating in the field you are to respond to any orders with "orders acknowledged" or "moving out". If you are assigned to a unit with a tank in it, don't bother replying to orders, the guy in the tank is bigger so he will reply. And the guy in the helicopter? Forget about him, he's too busy spitting out clichés from the movie "Aliens".

Some rogue nations are known to use "chemical troopers" which carry backpack tanks of poison that they shoot out exactly like a flamethrower. Nothing effectively stops this attack so do not bother to put on your gas mask if you managed to find one and pick it up through your feet.

Lucky for us South Korea is a peace loving nation, otherwise we would all fall to their incredible strategy.

Never go to war with South Korea. Koreans are the best generals and they will swarm your base with an infantry rush before you even have a chance to build a "people factory". Korean infantrymen are also known to use the most powerful weapons and wait at the insertion point for reinforcements to appear, where they massacre them in cold blood.

Nuclear missiles are precision weapons that will only destroy a few buildings, so fire away. Even though the United States has hundreds of intercontinental ballistic missiles only one can be fired exactly every five minutes. Two of those five minutes are spent "stirring the nuclear soup cauldron" which provides the material for each missile.

The enemy is very deceptive and is known to hide American weapons and equipment inside of crates, barrels, laundry hampers, trash cans, cabinets, and picnic baskets. Shoot everything, including guns, there could be hidden guns inside of those guns.

If you find yourself mortally wounded by an enemy sniper be sure to let him know that he is a faggot.

In some situations you may be forced to go up against an exact replica of yourself, only appearing in black and white. This particularly applies if you have challenged an enemy unit to a game of dodge ball.

When facing down the enemy commander he will seem easy to kill at first. Be prepared! After you shoot him to death his corpse will explode and a bigger version of him, a monster, or some sort of robotic death machine will appear. Follow the guidelines for combating enemy vehicles when facing off against this unit.

All of that seems so damned complicated. Maybe the Army is not the right branch of the armed forces for me to join. I mean they've got such an incredibly cool marketing campaign, but the last thing I want to be when I'm out on the battlefield and my life is on the line, is confused by a bunch of rules and facts. The Delta Force seemed like it might work out, their mass mailers consisted of a series of black three by five cards with their logo on the front and a message on the back with an 800 number you could call. The message read, "Unless your name is Chuck Norris you are going to die on your first mission. If your name is Chuck Norris expect to fight a whole country by yourself and see all your buddies die, unless they happen to also be named Chuck Norris." 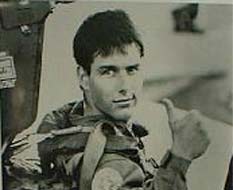 Yeah, thumbs up for you shitbean, you look like a fucking super model, if I joined the Air Force I'd either be steam cleaning your underwear or dead in about five seconds.That was simple enough but I don't think I'm cut out for the Delta Force since my name is not Chuck Norris and I don't want to die. I've always been a big fan of aircraft and it seems like the Air Force gets more and safer action than any other branch, so I checked out the Air Force recruitment package next. It was pretty spiffy but I didn't like a part in their "Your Role in the USAF" brochure.

Since I have a giant head and transparent skin I ruled out the USAF for fear of blowing up in a training accident. I've got friends in the US Marine Corps, so I checked out their information next. They had a snazzy poster with a skull on it that I immediately put up on my wall and all kinds of brochures and personal accounts about how great it was to be a Marine. My pirate heritage makes me a big fan of skulls by default, but the training pamphlet did not do a lot for my enthusiasm.

You will run up a mountain carrying a sack full of scalding hot sauna rocks tied to your bare chest.

Our drill instructors will punch you in the throat if your shoe is untied, then you will have to run up a mountain with two sacks full of scalding hot sauna rocks tied to your bare chest.

You're about as useful as a football bat.

If you don't have dreams about doing pushups our drill instructors are going to make you do pushups until THEY pass out from exhaustion.

If you can't run the obstacle course in under 30 seconds our drill instructors are going to slit your femoral artery open with a trench knife and bleed you out into the mess chili.

I hope you like rope burn, now climb that fucker you little faggot.

Should you suffer a complete emotional or physical breakdown during the training process, speak to one of our helpful guidance officers, who will gouge out one of your eyes and kindly inform you that "you don't need fucking depth perception for a goddamn faggot desk job you fucking dicksucker."

Cleaning the officer's latrine is a valuable skill for any Marine who is obviously a worthless faggot no better than a faggy gay from fag town.

You will be fully trained in the discipline of combined arms. Are you smiling at me? Do you want to go out behind the ordinance locker and fuck me? We fly faggots like you up to the top of Queer Mountain in a big pink helicopter and then shoot you out of the "cockmaster"; a specially designed 280mm mortar.

You are a faggot.

Since I'm not secure enough in my sexuality to endure Marine Corps basic training without breaking down and crying like a ten year old girl, I had to rule the Corps out. Which left me with the Navy. I had already just about ruled the Navy out because in their brochure they said "all of our fleet vessels are outfitted with imacs for you to browse the internet and e-mail friends and families." I had almost resigned myself to using shitty Macintosh computers on the USS Time Wasting Drills, when a piece of paper fell out of one of the Navy booklets.

"Join the Coastguard, we have a ping pong table in every lounge and the skipper lets us bring pornography onto the Cutter."

It was scrawled on a napkin in permanent marker, but that was good enough for me. If they ever start drafting people I am joining the goddamn Coast Guard before the shit really hits the fan.

It's Burning Up In This Piece!

Oh those damned Firemen get all the action!