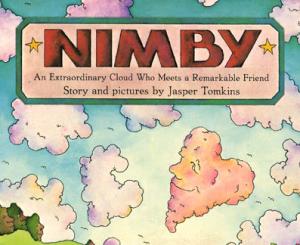 The only NIMBY that doesn't piss me off.As a public transportation advocate with self-diagnosed Asperger's and a gay dad, I have learned quite a bit about NIMBYs and the boondoggles they protest against. Today I'll teach you what I know about these important issues the way people used to learn from each other during the early days of the Internet.

"NIMBY" stands for Not In My BackYard, though it's often confused with the lesser known meaning, Not In My Butt You jerk, first coined by my girlfriend on an awkward Valentine's Day. NIMBYs are self-important middle class cretins who wish to preserve the status quo at the expense of progress. NIMBYs are usually middle class because poor people have no rights and upper class folk rarely live near live railroad tracks. And if they do, they probably own the railroad.

Anything that gets in the way of driving their kid to soccer practice, such as a trolley line or an S&M dungeon, is called a "boondoggle" by NIMBYs. NIMBYs don't live in cities, they live in "communities". They often depict public works projects as evil monstrosities infecting their humble little towns with noise, pollution, and cooties.

NIMBYs don't know what they want, but when they get it, they howl.

Because the word boondoggle is thrown around far too often and the word NIMBY not nearly enough, I have decided to highlight some high-profile projects and set the record straight. Is it a boondoggle or is it NIMBYism? You just might find out in today's update, but probably not!

The Central Artery/Tunnel Project in Boston, otherwise known as the "Big Dig" to those wishing to save the time and effort it takes to speak the words Central Artery slash Tunnel Project, has become the national whipping boy for corrupt public works projects.

All public works projects are corrupt to some degree, but these guys just went too far. It's like when you cheat on your taxes or your spouse. It's okay in moderation, but blows up in your face when your wife finds out you've been cheating on some other woman's tax return.

Envisioned as a way to relieve traffic on Boston's crowded highways, the "Big Dig" quickly turned into a sticky situation for the Massachusetts Turnpike Authority. Hey Romney, you could learn something here.

Among the allegations charged was that the concrete used in the project was just oatmeal mixed with bubblegum. Thousands of leaks were discovered by a bunch of trouble making nerds from MIT. Subsequent investigations found that subcontractors were using apes to do utility relocation and that the apes left banana peels all over the damn place which resulted in a three day strike by the sanitation commission. The apes were released back into the custody of the Transportation Security Administration and went back to work. 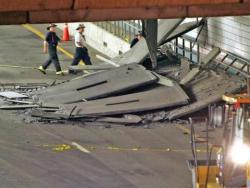 Rarrr! I am the concrete God. You go splat now! Rarrr!!!Big Dig bitching reached a threshold when a concrete ceiling tile fell from a tunnel and killed some woman. The tunnel was declared a crime scene and the criminal investigation revealed that free flowing vehicular traffic angers the concrete Gods and a woman had to be sacrificed to appease them.

Of course, few Boston commuters, if any, are refusing to use the new infrastructure in protest of any wrongdoing by Bechtel and Parsons Brinckerhoff, the firms in charge of designing and building whatever the hell they were put in charge to build (some kind of elevator?). Traffic has improved immensely in the Boston area and the fact that the thing is even useful at all saves the Big Dig from full boondoggle status.

That's why the Big Dig only gets four floating heads of Mitt Romney out of five.