In what is likely to become the biggest struggle in the history of public works projects in California, high speed rail will finally go to the voters this November after it was taken off the ballot in 2004 and 2006 by an actor we voted to be governor.

If Proposition 1 passes it would provide nine billion dollars for the construction of a high speed rail line from downtown Los Angeles to downtown San Francisco. And we're not talking some phony baloney Acela Express bullshit. This train will hit speeds of 220 miles per hour in California's Central Valley. Unpleasant illegal immigrant farm workers are but a blur at such speeds.

But you can't plan a rail project in California without hearing wails from NIMBY scum. Concentrated NIMBY opposition has already surfaced in the communities of Menlo Park and Atherton, where the Bay Area's Caltrain corridor may be widened to accommodate high speed trains. 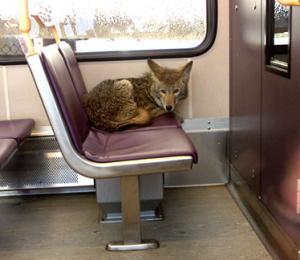 An example of mass transit in California.Officials there plan to join a lawsuit in order to invalidate what is called an environmental impact report and call a do-over, which would add millions of dollars and wasted time to an already expensive project. And NIMBYs wonder why these things go over-budget so often.

Not to be outdone by the NIMBYs in Menlo Park, the California High Speed Rail Authority, the braindead politicians put in charge of overseeing the rail line, is doing their damnedest to kill the project as well.

Long criticized for releasing overstated ridership figures and understated construction cost figures, the authority has decided to award the contract for the project to Parsons Brinkerhoff, the very same firm partly responsible for the Big Dig debacle.

Does anyone at the CHSRA read the newspaper or what? Eh, maybe it's not so bad a choice. Besides, every second chance begins with a first step. If you want respect, you've got to take it. After all, life doesn't hold tryouts. Backstabbing. Spotlight-grabbing. Secret-blabbing. An engineering firm's life is all that.

The NIMBYs don't get it. The city council says forget it. The supporters who voted it in now regret it. But does California High Speed Rail got game? Bet on it. Bring it on, this Fall.

That's why California High Speed Rail gets two California State Senator Tom McClintocks out of five. Look, taxes are going to go up anyway. We might as well get a cool train out of it. You don't want your tax dollars going to some loser kids with cancer do you? Vote yes on Prop 1! If you don't live in California, just go back to quietly talking about us behind our backs you Northeastern bastards.

As if this update wasn't img-timeline enough, have you guys heard about this BRIDGE TO NOWHERE in Alaska?! Yeah, they wanted to build a bridge almost as long as the Golden Gate in order to serve a population of 8000. Holy cow! What a barrel of pork!

I guess when it comes to Ted Steven's pet project, we're all sort of NIMBYs. I mean, Alaska is kind of America's backyard right? Or is that Canada? You know what, forget I said anything.

Anyway, it gets my highest boondoggle rating ever, five disembodied heads of Senator Ted Stevens out of five.

Subway to the Sea

Hi, I'm Sally Struthers. I'm here today to plead with you to help support a transit project in dire need of some love. Have a look at this amputated leg of the Los Angeles subway.

In its infancy, this little subway was attacked by NIMBYs who didn't want colored folk coming into the westside of Los Angeles. They disguised their intentions to kill the subway as concerns about methane gas pockets or dinosaur farts or whatever. They passed measures to ban the use of tax money to fund subway construction and effectively starved this poor subway almost to death.

For only pennies a day you can help this subway reach Santa Monica as God intended.

Okay, enough Sally Struthers nonsense. There's a time and a place for everything but now isn't it. Frankly, the Los Angeles Purple Line extension to Santa Monica is quite possibly the most important public transportation project in the history of ever.

Ridership would be 600 billion boardings per year and even the woolly mammoth bones under the La Brea Tar Pits would use it. White people might even ride it, which is an experimental new concept for mass transit in Los Angeles.

Because of the importance of this project I can only muster up one Zev Yaroslavsky, the politician who is credited with killing the subway, out of five.