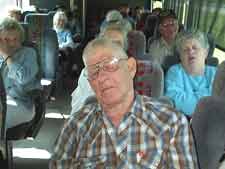 After a long day trip to the casino these seniors are all tuckered out. If they're sleeping they can't be out causing trouble. Before my grandmother died her schedule was set like clockwork. Every week she waited for her social security check, cashed it, and went to the casino on the senior citizen bus to give it all to a Native American tribe. Before she retired gambling was merely a passing interest. But I tell you man, after she quit work for good she boarded the charter bus to the high desert casinos and never looked back.

No normal old person wakes up one day and decides to go to a casino, much less devote their life to them. They must be initiated by their friends who are already retired. Their friends must have been lured by somebody else. And that somebody else was also invited on past senior casino trips. It's a cycle of initiation and invitation that never stops. Nobody knows who the first old person was to go into a casino and who he invited with him. Much like the origin of the universe, the mystery may never be solved.

Every few weeks my grandmother would return from her trip and announce herself a winner and she was very happy. I would ask her, "But what about those other times you lost, grandma?" It was a futile question. On a long enough time scale every gambler is a loser. But it's those occasional wins that keep them going back, even if over the course of their gambling career they are in the red. None of her friends ever won the big jackpot but there are stories of friends of friends of friends' friends hitting the big one. It's this kind of rhetoric that keeps senior citizens in the casinos.

I never liked how my grandma spent practically her entire check on gambling. But she had a place to go with people she enjoyed being with so I never pressed the issue. Casinos are like a daycare center for senior citizens. It gives them a place to go after their stories and keeps them out of trouble. Crime among seniors has been rapidly declining in the last thirty years. Much of this can be attributed to gaming and charter buses.

That's why if a casino were to close the consequences would be disastrous. It's not something we ever think about because we always rely on those bastions of cigarette smoke to be there for us. The Sim City series has conditioned us to believe that legalized gambling in a city will bring in more crime. In fact it greatly reduces crime. To lose what benefits casinos grant our society would be unthinkable. Well, the unthinkable occurred yesterday in Atlantic City. An entire string of casinos, shut down in the midst of a New Jersey budget crisis.

The area has been declared a national disaster zone. Senior citizens are milling about in the street clogging intersections and knocking down street lights wondering who they should be giving their money to. They have no where to go, no where to drop off their paltry sum of social security money. The president has flown over the area twice in the past 24 hours to survey the damage. CNN has round the clock coverage.

"I never thought this would happen," said 77-year-old Ruth Dodies of Philadelphia as she stood outside a closed entrance to Trump Plaza Hotel and Casino. "It doesn't make sense. It really doesn't."

Well, Ruth, people have a habit of voting for politicians that spend tens of millions of dollars to run for public office and then act all surprised when they turn out to be giant egotistical douchebags who can't even compromise with members of their own party. Governor of New Jersey Jon Corzine wants to raise the sales tax from 6% to 7% to cover the state's massive deficit. The douchebags in the New Jersey State Legislature don't want to raise the sales tax. What you've got is a whole gaggle of douchebags in a position of power waving their political dicks around and the working public suffers for it, especially our gambling seniors.

It's high time for Something Awful to step in. How do we get the New Jersey state government started again, get the senior citizens into those casinos, and cover the deficit all in one fell swoop? I've got a few suggestions!

Get on a game show and win big: One of the most basic sitcom plots is the one where the family is in some kind of financial peril and ends up going on a game show and winning the grand prize or plane tickets home or something like that. That's not just something those Hollywood think tanks thought up on their own. Every day millions of American families are paying off their debt and getting back in the black by going on game shows.

Raise taxes to 100%: If there's anything I know about New Jersey, and I don't, it's that New Jerseyians love their state and are willing to sacrifice anything to keep that legacy of "well, aside from Newark and Trenton the rest of New Jersey is okay I guess" going. That's why I don't think New Jersey citizens will mind a 100% sales tax and giving all their income to the government. In fact you can give them little farms to work on which will be close to their homes and be convenient. There has to be rules though. Nobody can leave the farms and whippings are mandatory. The deficit will be covered in no time.

I couldn't find a picture of New Jersey that didn't make me want to vomit so here is a neat picture of Erykah Badu.

Lower tax rates: There's a theory in economics called the Laffer Curve. It was named so when the guy who presented it to his fellow economists got laughed out of town and tarred and feathered. Arthur Laffer got the last laugh though when he sketched the theory on a napkin and then it was called Reaganomics and then I got bored looking up information on it.

The idea is that you lower tax rates because people respond to incentives like keeping more of their own money and end up working harder to make more money which ends up creating more tax revenue for government. When presented on a graph the line curves like the curvature of my dick. It's quite amazing. Want to see it? No, I don't mean the graph.

Have a bake sale: When I was a kid we had a bake sale in school so our whole class could go to a museum in Los Angeles. We ended up not going because of the riots but we did raise enough money to go! We never did figure out where that money eventually went though because we never actually went on a field trip.

Compete in the Cyberathlete Professional League: Come on Corzine! Brush up on your mad gamer skillz and frag the competition in the Cyberathlete Professional League. The CPL takes only the most hardcore gamers and pushes their bodies to the limit. Only the strongest, fattest, and palest survive! Who can flick their wrist the fastest in Quake 3? It'll all be decided in the cyber arena! Grand prize is a whole hog. It might not solve the budget crisis but a whole hog can do wonders for an economy.

CHANGE NAME FROM SPRINGFIELD TO SEINFELD: MANDATORY SIMPSONS REFERENCE THAT DOESN'T EVEN FIT AS A MATTER OF FACT BUT IT PADS OUT THE ARTICLE RATHER NICELY.

Shut down New Jersey for good: I don't know what kind of long-term effect this shutdown is going to have, but I imagine it has to be bad. Aside from lost tax revenue from casino profits and other economic implications, they are basically causing citizens to lose faith in their state government.

The divide among jobs that are non-essential and essential is ridiculous. You're telling a guy his job is non-essential. What does that do to a person's state of mind. Even if their job is a non-essential government job what purpose does it serve to tell him that? What incentive does that give him to work harder? Who stays in New Jersey after this? Why wouldn't they move to a state where the government isn't, you know, shutting down over a 1 percent sales tax hike?

And once people start leaving the state who is left to pay the taxes? Are you going to hike up taxes even more, making the state less desirable for the people stupid enough to stay? Or maybe nobody cares in New Jersey anymore. I don't know. I say shut it down for good. Turn it into a theme park or something. Disney can buy it and build Disney's New Jersey Adventure complete with a ride where you get pulled out of your car and shot to death.

Ban Pipebomb repeatedly: How do you think Something Awful got to where it is today? You invite this guy into your state, kick him out after a week, and tell him he has to pay to get back in. It worked for us, and it'll work for you too New Jersey.

New Jersey's budget crisis shows no signs of ending anytime soon. As workers languish over how to handle loss of wages politicians continue to fumble and flounder. Where ever New Jersey citizens go I hope it's not California. Next time someone from Jersey tells me how great the east coast is I'm going to punch them in the mouth and tell them, "MY TAX DOLLARS AT WORK."