PC vs. Mac: It Ends Today 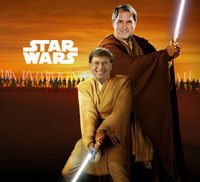 I searched for "Steve Jobs" and got this. I hate you, internet.

Greetings, my little poodle-children. In the two weeks since I last graced you with my presence, I have purchased my first Apple computer: an iBook G4. The "official" reason I needed a laptop was to continue writing for Something Awful while on an upcoming holiday trip. The real reason was a rumor I had heard; that the heat produced by a laptop creates an experience similar to a lapdance from a paralyzed stripper that has a severe fever. Hold on a second... yeah. Rumor confirmed.

I've always been a PC guy, but my experiences with the iBook have been so positive that I'm beginning to rethink my ways. What exactly can a Mac do that a PC can't, and vice versa? Which platform is really the best overall? Where do puppies go when they die? These questions have yet to be answered definitively, and this is the only website brave enough to step up to the challenge. Given my stature as this site's most intelligent writer (proven during a staff chess tournament, in which I outwitted my opponents by staying home), the duty has fallen on my shoulders. Before I lay the Mac/PC argument to rest for good, we must understand the chain of events that brought us where we are today.

As most scientists agree, the universe began in the early 1970's. At first, there were only single-celled organisms and naturally occurring (yet crudely constructed) objects such as light bulbs, hot dogs, and Baldwin brothers. The universe, by all acounts, sucked. Big time. Then, suddenly, it happened!

After that happened, Bill Gates and Steve Jobs constructed the very first computers using whatever they could find laying around the house (shoestrings, cans, human brains). Gates went on to form Microsoft, a company that foolishly set out to earn money. Jobs formed Apple, vowing to never walk the dark path of his rival. Instead of making money, he donated every computer Apple produced to charities such as Computers For The Homeless and Computers For Third World Children That Sally Struthers May Or May Not Eat. This earned Jobs the respect of communist hippy bastards everywhere, and immediately created a rift between the core userbase of each platform. This divide became increasingly bitter over the years, and eventually culminated in the Great War of 1997, at which time I burned down my own house in protest of the war. Well, technically there was no war, and my house burned down because I left some Pop Tarts in the toaster unattended. Still, my point stands: strawberry Pop Tarts are pretty good.

Now that we completely understand how we got to this point, let's get down to business and take a close look at the pros and cons of each platform.

Machines running windows make up the largest portion of the PC market, yet they aren't perfect by any means. Take, for example, their vulnerability to repeated submersions in water, and the fact that they cause cancer. Current versions of the Windows operating system also suffer from a severe flaw which allows Counter-Strike to be installed. In spite of its problems, the Windows-based PC is an incredibly versatile platform. Windows users can do almost anything; from downloading an exciting array of viruses to attempting to remove an exciting array of viruses.

Mac image blatantly stolen from the online comic Diesel Sweeties. After this theft, my "street cred" has surpassed 50 Cent.

Apple's greatest strength throughout the years has been their neverending stream of incredibly fucking stupid advertisements. These commercials portray Apple users as pretentious assholes that wear black turtlenecks, sit in the corner of Starbuck's all day, and think German art films are incredibly meaningful despite that country's fascination with David Hasselhoff. This might not appear to be a strength, but you'll just have to trust me. Unfortunately, Apple has long been plagued by a perceived lack of games, but this is simply a misconception. Mac owners have an incredible selection of titles to play. Pong was released for MacOSX last year, and Pac Man is expected to hit the market sometime in 2005. The developers are THIS close to fixing the bug that keeps Pac Man from turning left.

Now on to what you've been waiting for: the benchmarks. As a computer nerd, I understand the importance of measuring a system's raw performance, and the pain that comes with constant rejection by the opposite sex. I also understand the pain that comes with getting your head stuck in a honey jar, but that's another story. While a computer's features are important, consumers want to know that they're getting the most power possible. Comparing PCs and Macs has proven difficult in the past, since the two use entirely different architectures. The solution? Embrace the fact that the systems are different by running entirely unrelated benchmarks.

At first glance, it might seem as though the color keys assigned to Windows machines and Macs are exactly the same. Rest assured, however, that it seems this way with every subsequent glance.

Here we clearly see something happening. It's pretty impressive, right? Those jerks at [H]ardOCP could learn a thing or two by following my example. In fact, you could too. Stop slouching like that, it's bad for your posture.

This test only confirms my suspicions. After tallying up the scores, it's quite obvious that Joe Don Baker outperforms PCs and Macs by a substantial margin, especially when he's had a good nap. Here to comment on the outcome of the PC vs. Mac showdown is Mr. Joe Don himself.

Say, you got any ham, or beer? No? How about beer that's been frozen into the shape of a ham?"

The State Og boys are back, and they brought the unearthed remains of Marilyn Monroe with them. Don't ask me, I don't understand it either. I find it's best to just nod and back away slowly with these guys.

With this kit you get a three-month supply of rum that is laced with four chemicals which reduce violent tendencies, and six chemicals that do just the opposite.

Check out this week's State Og! It's just like Star Wars, only without the adventure, space, lightsabers, and woikees. To make up for it though, State Og has three times as many homosexual robots.