National Poetry Month is a godsend for individuals such as myself who are generally afraid of the emotions and introspective self-analysis involved in writing poetry, but welcome any chance to assume the more passive role of poetry admirer. And while I still found entering the poetry section at Borders to be slightly too intense, I was able to attend an actual poetry reading without having my skin turn into thousands of tiny spheres and explode from whatever it is about social anxiety disorder that makes it resemble the death scenes in The Lawnmower Man (more on that later).

From the National Poetry Month FAQ:

As a slight aside, my open letter to the Academy of American Poets is as follows: Please hire a professional writer, possibly William Shatner, to write a National Poetry Month FAQ that actually has something to do with poetry. And no, the fact that both are impossible to understand doesn't count.

For the last several months, my colleagues at Something Awful and I have been working on a plan to expand National Poetry Month into a multicultural event that will unite the whole world. Or, failing that, America and whichever part of the middle east currently hates us the most. The result of our discussions was an idea so brilliant, yet simultaneously so utterly simple that it's easy to see why the Academy of American Poets was too busy unifying the confederacy of their mouths and Langston Hughes's dick to notice it themselves. World Eternal Happiness Month.

Serving as a central clearing house for the hopes of all humanity, World Eternal Happiness Month was now ready to be catalyzed via this website. But before I could begin changing the world I would first have to rebuild myself from the inside. Ever since watching Cutey Honey volume 1, I have wanted to be happy, but was I ready for the long-term commitment of eternal happiness? To find out I attended amateur poetry night at my college, hoping to gain some valuable insight on savoring life as one savors a fine wine or whatever it is poets do in between not watching TV.

I made the mistake of becoming too preoccupied with how easy it would be to point at the giant ass of the cameraman next to me and scream "THIS GUY'S ASS IS ABOUT TO EXPLODE!!" creating a widespread panic that would allow me to escape with most of the flowers from the podium. It was only through sheer willpower and listening to the guy in the next seat rant about how totally hard it is to be treasurer of the Solar Energy Vehicles club that I was able to forego the quick adrenaline rush of flower theft for the long-term rewards of eternal happiness. Oh, and on a slightly-related note, I'm pretty sure my college is building some kind of crime-fighting robot solar car that can travel through time, so you should all be hearing about that in the news pretty soon.

They had to end the poetry reading prematurely after I totally blew everyone away with "RPG R.I.P.", an improvised rap about the Squaresoft/Enix merger:

Art Carney dolls marchin' in formation
Blue hats be dealin' out devastation
Suckas won't be laughin when my lyrical attack lands
Turnin' 90 degrees like motherfuckin' Pac Man
I cut staties down til they missin' they limbs
And all you wannabe playas with the Wal-Mart rims
That don't mean shit, y'all can't compare
Roll you like a wheelchair down a flight of stairs
Fools down at Squaresoft may as well retire
Me and Jake gon' collect, bitches was wired

After the poetry reading I immediately went home, opened up Worldcraft, and set about the task of creating avant-garde Quake 2 NETart to spread my message of eternal happiness to the rest of the world. The relative ease with which I was able to create these pieces confirms my theory that I can better serve the cause of eternal happiness as an artist than through my real-life role as a community college student banned from ever attending another poetry event at my college again. 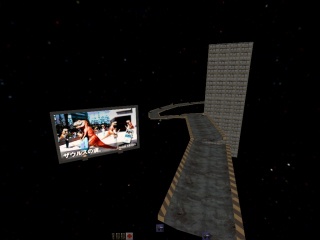 This seemingly innocuous Sonic the Hedgehog tribute actually represents the long road to racial harmony between whites, eskimos, and otherkin. I didn't use any colored lighting because I was aiming for stark minimalism and also because love is colorblind. 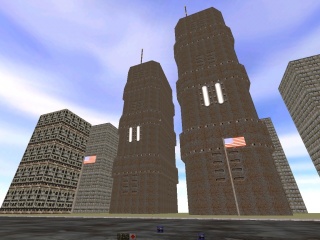 This is a piece of concept art for a feature film. In the script I'm writing, Samuel L. Jackson is a small time crook who goes on a bloody killing spree to get back the money a mob boss stole from him. Each gang member he kills represents a false source of happiness. Then at the end of the movie, he throws the mob boss off a skyscraper and gets his money back, only to reveal in the final scene that he doesn't need the money because true happiness comes from within. 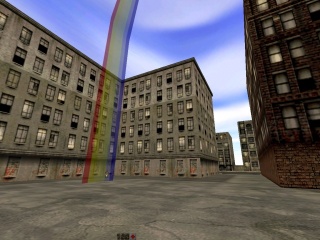 This is a personal statement of sorts. To some people, especially if they're emaciated heroin addicts living in filth-ridden slums, bringing the world eternal happiness may seem like the best, most glamorous job ever. And while technically it is, at the end of the day, just like everybody else, I have to leave the empyreal bliss of my enchanted rainbow kingdom and return to my personal filth-ridden slum; the upstairs room in my dad's house with no air conditioning.

I am truly happy. Also, the part of my brain processing the happiness into this monologue is generating its own happiness, setting up what is essentially an infinite feedback loop of pure ecstacy. Naturally, I can't do this bitter sarcasm schtick any more. If you're still looking for depressing, profanity-filled narratives, I suggest trucker stories. Haha, no, I'm just kidding. Trucker stories are quite possibly the worst crap ever. Adios!

Commie agents have traveled back in time to destroy Thanksgiving for all God-fearing Americans and only one man can stop them! Journey with time-leaping hero Daring Armstrong as he puts a stop to Stalin's evil plot once and for all...in comic form.

How will this nail-biting drama be resolved? Find out by clicking a link and then staring at the screen for a few seconds!