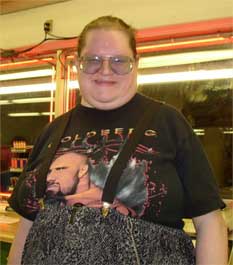 He's going to Hell. Or her. Whatever it is.

One of the most exciting trends currently sweeping this great nation of large SUVs and its even larger pork-filled citizens is the concept of Heaven. Everybody who's anybody plans on floating up to Heaven when they die! Your favorite movie stars, the most talented athletes, the coolest kids in school... they're all going straight up to Heaven when they kick the bucket because Heaven is THE place to be! Heaven is a mystical kingdom full of radical people with a special "can-do" spirit and winning edge that sets them apart from all the second-rate folks who didn't have what it takes to ascend up into the big H-Spot in the sky and must instead settle for second best, a place known as "Hell." You know who is comfortable going to Hell? Americans who refuse to purchase the most elegant and expensive name brand sports drinks. Chumps who don't have the balls to engage in a session of "Xtreme Sports," such as skateboarding off the back of a grizzly bear plummeting down a waterfall while you lasso your bungie cord around a stray unicorn and float to safety strapped to a hang glider crafted from porcelain beads of your own jeweled sweat. Heaven is a place for proactive CEOs who aren't afraid to run a marathon in the morning, attend lunch with the Queen of Prussia at noon, spend an evening studying over financial records, and still have enough energy left over to beat their wives after dinner.

However, many people experience confusion when creating a checklist of qualities needed for the great afterlife ascension. Sure we all know the basics: outright stealing, murdering, and bestiality will send you directly to hell, unless of course the chicken really enjoys the sex and you obtain permission from its parents beforehand. But a successful voyage to Heaven is a journey full of confusion, grey areas, and mystery, much like the time I had to drive through southern Iowa for a reason I cannot currently recall. I will now attempt to answer some of the most common, burning questions regarding transcendence to the immortal land of clouds and harps.

Q: DO ABORTED BABIES GO TO HEAVEN?
A: No they most certainly do not. Fetuses, despite being legally considered as "living people" by many fundamentalist Christians who additionally grant them the right to vote and obtain a drivers license in 47 states, get sent directly to hell when Doctor Murderface stabs them repeatedly in the skull with a vagina crowbar until their body becomes a thick, gooey substance not unlike a popular brand of cake icing. You see, one of the primary requirements needed to pass into Heaven resides in the Baptism process, a procedure which welcomes Jesus into an infant's life, usually through its mouth or ear canal. If you die without being Baptized, you are sent directly to Hell without any stops or layovers. You don't even take a break in purgatory; you get sent on an express elevator into the fiery inferno of eternal torment and buddy, there ain't no "PRESS IN CASE OF EMERGENCY" button on this ride! Hell is chock full of aborted fetuses who are forced to shovel coal into a giant robot's mouth. Once the giant robot has enough coal inside, its eyes begin to light up with the power of unholy rage, shaking the ground with its all-encompassing power and sending shockwaves of fear throughout the Kingdom of the Damned. Then it shuts down. It is not a very fuel-efficient robot. Regardless, every single aborted baby roasts in Hell, so if you knocked some chick up and are really concerned about doing "the right thing" for this innocent child, force her to give birth to the baby. Once she's launched the sucker out of her greasy gaping toddler cannon, you should drive it to the nearest church and get it Baptized by some important-looking guy wearing a robe. After the ceremony is over and you've enjoyed the delicious Baptism buffet, you can take the baby out back and beat it to death with a rake. This way you'll still have a dead baby as originally planned, only now you'll be able to sleep easier at night knowing that he's painting Jesus' fence up in Heaven rather than shoveling coal for the Devil in Hell. If the authorities try to give you a hard time about it, then feel free to explain my reasoning to them. Please don't mention my name or this website. 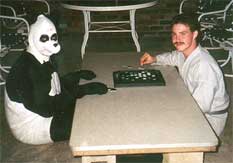 Both of these things are going to Hell. So is their checkerboard.

Q: DO VAMPIRES GO TO HELL?
A: Yes. Vampires are generally recognized by most experts as being highly anti-Christian, ranking up there with homosexuals and liberals. These dark, evil, nefarious creatures lurk in the shadows to prey on innocent Christians and drink their blood for some dark, evil, nefarious reason. I'm sure there's some explanation detailing exactly why vampires need to drink human blood in order to survive, but they didn't mention anything about it in the hit 1987 film "The Lost Boys" starring Corey Haim and Kiefer Sutherland, and I don't currently plan on doing any research which requires me to exert more effort than briefly thinking about that movie. If you are a devout Christian really intent on going to Heaven, you should do your best to prevent becoming a vampire or any other undead creature, such as zombies and mummies. This means you should hang crucifixes over all your doorframes, sleep on a waterbed full of holy water, eat a lot of garlic (try putting it in protein shakes for a great early morning boost), and drive stakes through the hearts of anybody you suspect to be a vampire or evil in general. It's okay if you accidentally murder somebody who was not a vampire at the particular time you murdered them; Jesus gives you three chances for such false positives. Just make sure you don't stab somebody important like the Pope or an endearing circus elephant who has captured the hearts of children in small towns across America.

Leviticus 18:22 - "You [masculine] shall not lie with a male as with a woman; it is an abomination."

Lev. 20:13 - "If a man lies with a male as a woman, both of them have committed an abomination; they shall be put to death, their blood is upon them."

Rigidicus 43:53 - "And lo, he who had maketh a woman as [his] bride shall be cursed to a life of partnership lacking sufficient Medicare coverage for thine abomination family."

The Big Book O' Ed 9:14 - "While lipstick lesbians featured in the moving pictures may be arousing to the groinal region, real life lesbians resemble ugly butch bird-women and should be stoned immediately. Oh yeah, and they're abominations too." 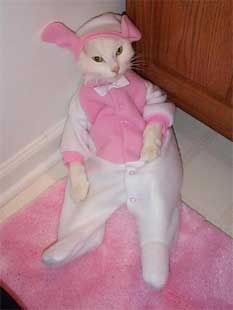 You can bet this creature is going to Hell.

Fortunately homosexuality is considered by many leading religious bozos to be a mental disease, and every disease has a cure. Well, except AIDS and that one disease which causes people to mistakenly believe "Will & Grace" is an entertaining show. In this case, the cure consists of "not sticking your penis up a man's butt" if you're a man, and "stop playing rugby and being so goddamn ugly" if you're a woman. There are many churches and houses of the Lord you can go to if you fear you are a homosexual, and these places of worship will pray the gay right out of you. They'll sit you down in a holy chair and repeatedly ask you, "are you still gay?" and if you say yes then some important guy will throw holy water on you while his puffy, bloated wife weeps countless tears of mascara in the background accompanied by festive organ music. Then he'll shout some really emotional parables from the Bible, such as the one where God fed Ezekiel a magic dinner roll and told him to go away to Israel so he could talk to people for a week and nobody would listen to him. Homosexuals must understand that their desire to make out with people of the same sex merely represents a chemical imbalance in their brain, one that can only be cured by administering 100 milligrams of Jesus Christ every day. This should only be taken orally, not anally.

Q: WHAT ABOUT JEWS AND PEOPLE OF OTHER "INCORRECT" RELIGIONS? WHERE DO THEY GO?
A: Hell. You can be the nicest, most wonderful person to ever exist in this plane of reality, but if you haven't accepted Jesus into your heart by the day you keel over and kick the bucket, then you will go to Hell. It doesn't matter if you've developed a cure for cancer or spent your life building houses for homeless drunken Indians with gambling debts; if you refuse to accept Jesus Christ as your lord and saviour, you are going to burn for all eternity, possibly even longer if you're not insured. Additionally, many popular Christians who have their own network television shows agree that a good majority of people who believe in Christ are still inevitably going to Hell for various colorful reasons. Here are some simple statistics to prove this point:

If your god is an elephant with a shitload of arms, you're going to Hell. If your god is a crying woman who encourages kids to recycle while teaming up with Captain Planet, you're going to hell. If your god is a tiny fat smiling dude who talks like characters from "The Matrix," you're going to Hell. If your god is L. Ron Hubbard, well you're definitely going to Hell. Jews are particularly Hellbound because not only do they fail to accept Jesus as the Son of God, but they are also directly responsible for His murder. When Pontius Pilate approached a crowd of citizens outside Rome or the Gaza Strip or Little Italy or wherever all that Bible crap took place back in the day, he offered them a chance to free one of two prisoners. Prisoner #1 was Jesus Christ, a magical creature notorious for curing lepers, transforming water into wine, walking on water, and throwing out the first pitch for the World Series. Prisoner #2 was Barabbas, a fat guy who robbed people and then murdered them. The group of irate Judeans proclaimed their preference for Barabbus, and as a result, Jesus was voted off the island. I'm not exactly sure what noteworthy things Barabbas went on to accomplish after his brief stint in prison, but I suspect he eventually married Carol Channing. So if you're Jewish and have some misguided goal to ultimately end up in Heaven or some location more pleasant than downtown Baltimore, you should prepare to be disappointed because Jesus is eternal... and so are his grudges against the bozos who killed him.

With such strict requirements and a small guest list, it's no wonder why Heaven is the hippest spot to party in the afterlife! If you abide by a few (hundred) simple rules and choose the correct religion, you will be practically guaranteed a position in Cloud City once your bloated corpse is hit by a tractor trailer, smearing your brains across the interstate. Just remember to wear your garlic necklace at all times.

Nermal IS a boy kitty

Ryan "OMGWTFBBQ" Adams keeping it real. Real short. I'm doing some Thanksgiving cooking, and this turkey ain't gonna brine itself, now is it? No, it's not.

Forums Goon jood found a Flash site that allows you to make custom story tapestries. So in typical goon fashion the forums decided to come up with a few "interesting" takes on ye olde medieval times. Bar wenche! Bringe me more ale!

Enjoy the holidays, and drive safely.