People Who Should Get Off The Internet

You know it's the right thing to do.The Internet has come a long way. It is now the number 1 thing humans use in their daily lives surpassing even that of oxygen and brains. What started as a small experimental network for military communication has expanded into a powerful tool millions of Americans use to update their MySpace profiles. The sole purpose of this vast network of computers and servers is to get as many people as possible to add you to your friends list and the person with the most friends at the end of the month will win a prize hog.

There's trouble in paradise unfortunately. We are now on the cusp of Internet overpopulation. There are just way too many people buzzing around online and they all share an equal opportunity to post their innermost thoughts and make web sites. Once upon a time web sites were reserved for only the smartest and most socially inept nerds that knew complex HTML code and how to jam a modem into an ISA slot with their fat sausage fingers. All was well, that is, until evil Internet service companies, in their quest for the almighty dollar, made getting online easy to do...

Soon everyone was getting online. Morons, perverts, and even women were logging onto the information superhighway. Sites such as Geocities and Tripod made it easy for anyone to create a web site which paved the way for numerous Dragon Ball Z and Small Wonder fanzines.

Now with the advent of MySpace people don't even make personal web sites anymore. With a simple click of a button complex algorithms assemble random jumbles of HTML code to create incomprehensible pages called "profiles" for people to post what drugs they took at what club last night for a potential employer to read and enjoy.

The truth is that the Internet has gotten way too easy. Anyone can get online and start flinging their cybershit at 100 miles per hour without a care in the world. It used to be that you had to find an init string for your modem to dial up a server. I still don't know what the hell AT&FX4&A3&B1&D2&H1&I0&K1&M4S7=60 means.

I somehow managed to get online and when I did I behaved myself. I earned my place through hard work and sheer determination. When my phone jack broke I strung together four old modems to connect my computer to the phone jack in the kitchen so I could download gifs of naked ladies at a snail's pace with my little 14.4 modem. Oh U.S. Robotics, you got me through some tough puberty I'll tell ya that much.

Now with always-on DSL connections getting online and posting U DUM ASSH*LE GOKU-SAN CAN BEAT VEGITA ANYDAY U F*KKEN NUBSAUCE on an Internet forum is never more than seconds away. I too have felt the urge to engage in insane arguments about cartoon characters but when computers were computers it was always too much of a pain in the ass to do so. Now it's easier than ever to put any insane idea that comes into your head online for everyone to see!

Case in point. I present the William Hung Cooking Show.

Welcome to the William Hung Cooking Show's center for delish cooking! Here we make all sorts of gormet goods and tape it on are extreme chick/broken video camera for you to enjoy! Go to all of are clicky clickables and watch are videos or really anything you'd like! But make sure to sign the guest book (as soon as we get it!)! HAVE FUN CHICKING AROUND!!!

The concept is simple. It's a cooking show that is posted on the Internet for your enjoyment. I don't know what it has to do with William Hung but it has everything to do with a lack of shame. Have a look at my favorite episode here.

Are they speaking English in that video? Are they speaking any language? Can you tell me what the hell is going on here? Is it some kind of cooking cult? It's just a bunch of insane kids shouting nonsensical gibberish while preparing some kind of Duncan Hines recipe for moist cake. It's creepy as hell. It seriously scares me and makes me afraid for my life. And it wouldn't have happened if computers and the Internet didn't make it so easy to make and publish videos! I made videos on my parent's camcorder ten times worse than this. They were mind-numbingly bad. But I could never figure out how to put them on the Internet!

In the good old days if you wanted to make something on video first you had to find some film. Then you had to shoot on that film. To edit scenes you had to physically cut the film and piece it back together. To get people to watch your video you had to either get it into a video store or on TV. It was a giant pain in the ass. You would only go through it if you had a really good idea.

Now every kid in the world has these Apple iMacs and video editing software suites that practically make the film for you! All you have to say is, "Computer, make me a retarded video" and before you can say "NO DON'T", you have an instant Internet video ready for the world to see. I don't understand programs that want to put a laptop in the hands of every child. I want to take laptops away from every child! Read a book you damn kids! You can play Math Blaster when you get to the computer lab. That's what it's for.

When something is hard to do it usually keeps people who are not good at that thing from doing it. Take myself for example. I wanted to learn the piano. I got a little keyboard and a how-to book and tried my hand at it. It was a train wreck. I had no clue what I was doing. I couldn't get my right hand to work independently of my left hand. My playing was terrible and I didn't want to put the time into it to get good. I ended up quitting and went back to watching cartoons.

The difficulty of the piano kept me from making a fool out of myself in public. Nobody in their right mind would let me into a concert hall to play in front of an audience. But in the online world the Internet is the concert hall and they let in millions of stupid pianists who only know how to play a few notes of the Jurassic Park theme every single day.

It's bad, people. That's why I am calling on everyone who should not be on the Internet to leave voluntarily. Don't fight it. Don't argue. Just go. You know who you are. For those that don't I have created a helpful guide.

I give you the following list that will no doubt surpass PC Gamer's top 100 video games and Cat Fancy's top 50 scratching posts as the most controversial list to ever hit the newsstands. The following people should get off the Internet.

Get your hands off the keyboard! You are under arrest for dumb Internet crap!

Anyone who waited eight hours in line for an Xbox 360.

People who get aroused by balloons.

People who check their MySpace account on a library computer.

People who decide it is a good idea to edit a Wikipedia article about Miles "Tails" Prower to read, "TAILS IS A FAGGOT BUT SONIC DOESN'T MIND".

The person who guards the Wikipedia article about Tails with their life and reverts it back to the previous version less than two minutes after it is vandalized.

Anyone who uses Wikipedia.

ANYONE WHO THINKS JOHN HEDER IS FUNNY. FUCK.

Those who reacted to the recent Sony Playstation 3 press conference more strongly than they did when a member of their family died.

Any couple whose wedding picture is actually a screenshot of their World of WarCraft characters.

Fully grown adults who like to wear diapers and act like babies and shit themselves in their diaper and make sure there are pictures of it for everyone to enjoy.

People who have signed an online petition to get Arrested Development back on the air.

Anyone who watches a TV show while posting about it on an Internet forum with others who are also watching the same show in real-time.

Women who dress up their still-born fetuses in their Sunday best and post pictures of them on a web site complete with angel poems, bad clipart, and midi renditions of Bette Midler's "The Wind Beneath My Wings".

DID YOU EVER KNOW THAT YOU'RE MY HERO

People who made a really embarrassing Geocities web site about Sonic the Hedgehog when they were 14 and they forgot the password to their account so they can't delete it and all their friends make fun of them even though I tell them to stop. Sigh.

Webmasters who charge $10 to post on an Internet forum. $5 for an avatar.

Writers who make a list of people who should not be on the Internet.

People who ever cheated in an online video game.

People who care about players who cheat in online video games so much that it makes them SO ANGRY RARRR.

Artists that draw web comics about girls on their period and how much of a raging terror they can be at that time of the month!

Anyone who is waiting patiently for the next World of WarCraft patch that finally fixes paladins or some other gay RPG crap. I don't know ask Abraham.

People who draw pictures of furry foxes buttfucking each other and have milk shooting out of their breasts and the breasts are not breasts but penises.

People who defend pedophilia art sites by suggesting that it is merely a sexual orientation and the sooner society accepts it the better off we will be.

People who regularly use the phrases, "heh", "amusing", and "Quite honestly" in their forum posts.

People who have been connected to an IRC chat room for 72 hours in a row and didn't type a single thing in that entire time span.

People who are seriously considering buying this book.

There, that should get rid of everyone who is ruining the Internet. And then, when everyone is gone, only the chosen one will be left... 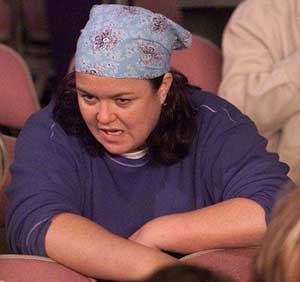 And only then will the Internet evolve into what it was truly intended to be.

The Truth Shall Set You Free

Click here to learn how much I love Rosie O'Donnell and how I intend to make all that is wrong right in the world with Rosie's teachings.