A Timeline of Our Rising Gas Prices 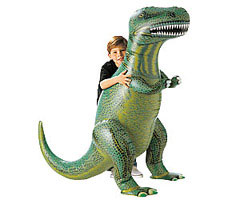 As of today, it has been 65 million glorious years since the dinosaurs went extinct. Upon their tragic demise, the myriad dinosaur species roaming the planet magically melted into a black substance we call "petroleum," which, at present, is undeniably one of most important black substances on the face of the earth. Since those ancient dinosaur days of yore petroleum has grown to be of grave importance, mostly by fueling our modern way of life. In many ways the dinosaurs, like Jesus, died to give us a better world. Unfortunately Jesus did not turn into a worthwhile fuel source and that is why he will never have the lasting impact of the Tyrannosaurus Rex.

As of my writing this, a gallon of gas costs roughly $3 USD, putting it on par with a half gallon of most verities of juice. Juice, while often even more expensive than gas, is not consumed as readily and does not smell as good. Also it does nothing to get your car moving, so therefore gas is still a much better liquid than juice. Still, it certainly helps distract attention away from how expensive gas is to point out that there are other liquids that cost more than gas. Do you feel relief at the pump yet? No? Shit, sorry.

However, the need for lots of gallons of gas places a horrifying bitch of a strain on the average traveling American, forcing him or her to make unwanted sacrifices such as "cut down on driving" or "take public transit, which is cheap, economical, and smart." Both of these options are unacceptable in the long run as they take away precious freedom, the very cornerstone of our pretend way of life.

But what you may be surprised to know in all of this is that gas prices have been steadily rising since the dawn of time. In fact, one could argue that gas has been increasing in value even before the concept of value was around to be used for such things. Using a few of the books I haven't yet burned for warmth, I was able to put together the following timeline outlining the outrageous but steady increase in gas prices from the beginning to the inevitable forecasted end.

65,000,000 B.C. – Dinosaurs die, and through a series of completely mind-blowing events, are combined with mud and compressed into oil by natural geologic activity. The result creates a black liquid that is initially valueless due to a lack of oil pumps as well as the general absence of Texans and Arabs to exploit it.

300 A.D. – The Chinese begin drilling for oil, unaware of what it actually is. Over time they construct elaborate bamboo pipelines and use the oil for evaporating brine and making salt, which they then presumably put on top of delicious Chinese food. Oil increases in value as a byproduct of the Salt Wars, which devastated much of Asia until the Pepper Dynasty came to power and eased the spicy political situation.

700 – Baghdad's streets are paved with tar, which is produced from nearby oil fields. Baghdad's glory days quickly wither as the great city is brought down over centuries by genies, skeletons, and eventually Americans. Both the skeletons and Americans were motivated by oil, but for different purposes. The skeletons simply required lubrication for their dry joints.

800 – 1800 – Oil fields are established in the Middle East and Asia to pump precious oil out of the ground to be used for all sorts of things, the vast majority of which involve fire and hot times. Oil quickly catches on as a valuable commodity but because this is pre-inflation times we can only guess that it was probably worth a lot of whatever it was they used for money back then. I'm pretty sure it was gold falcon eggs but that may have just been a tall tale someone told me. 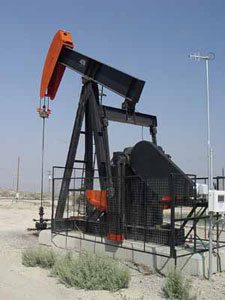 1800 – The first modern oil well is drilled in Russia, however it is quickly covered by an ill-placed series of blocks, which were not cleared away until some time later. At this time oil is worth the 1848 equivalent of $1 USD a barrel, which, as everyone knows, is three gold falcon eggs. Not long after that a means of creating kerosene out of petroleum is discovered, ushering in a bold new era in oil consumption. Refineries are quickly built throughout the world as knowledge spreads like the terrible virus it is. Oil becomes valuable in real money, though it is still not as crucial as coal or as coveted as gold falcon eggs. Toward the end of this century, automobiles come into existence and signal exciting new frontiers in oil usage for the common man.

1900 – Throughout this century oil prices rise violently, prompted by advancing transportation technology and later by the TV series "Knight Rider," which inspired people to finally embrace automobiles and made David Hasselhoff a key player in the petroleum industry (He was made an honorary member of OPEC). Prior to that, oil enjoyed brief but modest attention as a vital component of several major wars in addition to being a major plot device in the TV show "The Beverley Hillbillies." During this century oil went from being roughly $.25 USD a jar (barrels were not invented until 1941 by German Scientists) to close to $30 a barrel.

2000-Present – Oil prices steadily increase as demand grows, fuel-inefficient vehicles become popular, supply wanes, and global instability flourishes. To solve this America elects a failed oil tycoon and invades an oil-rich nation, making it more unstable. Oil prices steadily climb each year to the present average price of $2.909/gallon. One gallon of gas is now worth more than a pack of hot dogs or an entire pack of pens that could theoretically be used to write the world's greatest novel or the next important chapter of the Bible (featuring the part where Jesus finally triumphs over the Tyrannosaurus Rex in battle).

Present-2024 – The rapid decline in oil supplies causes modern civilization to crumble, allowing a barbaric world to take form where human life is just another commodity to be bought and sold. By 2008, oil prices increase to 10 virgins a barrel, and increases to 200 by 2023. In 2024 giant, genetically engineered frogs that belch super-heated plasma spheres destroy human life.

Now that we understand the problem, we can address the cause of it. I propose any of the following solutions to help instantly cure or indefinitely postpone the Oil Crisis:

Have your car towed by six glorious white horses, each one more pretty than the last.

Buy a pair of roller skates and then, with your grappling hook, latch onto semi trucks and enjoy the open road as never before.

Make voice powered cars that are fueled by human screams.

Kill all hippies and steal their silly bio-diesel vehicles.

A car that runs on Pabst Blue Ribbon????

Become a nation of fat shut-ins.

All and all, I think we can nip this problem before it gets out of hand. Sure, we've been taking advantage of oil for centuries now, but any of the options outlined above should get things under control until we can save up the money to invade a few more countries, thus finally securing all the oil we need to build the utopian world of dreams that we've been talking about for so many eons.