The Play By Play

Paul: I can't believe he just sank that shot! If you had given an infinite number of monkeys an infinite number of typewriters and an infinite amount of time, none of them would have made that basket. That was without a doubt the greatest play in the history of sports, and probably the most culturally significant event since little Elian Gonzalez went back to Cuba or stayed in the United States.

Dickie V: That's right, baby! That's what makes college hoops so exhilarating that I have to constantly yell! That's why the NCAA tournament supercedes your favorite shows or forces them to air reruns!

Paul: So now with two minutes on the clock, Florida and Villanova are tied. It's a much closer game than anyone could have anticipated, considering Villanova isn't even here due to their team bus getting stuck in a tight hallway that the driver thought he could clear.

Dickie V: That's right, Paul. When the announcement was broadcast over the PA system, the Florida half of the stadium went absolutely bonkers while the Villanova faithful went so silent that you could cook an egg on the sidewalk. We thought it was over, baby! Finito before it startedo!

Paul: And somehow, despite the setback of not actually being here, Villanova is keeping this a tight game. These kids have real heart, Dickie. They make me feel like a weak man who should be ashamed to occupy the same stadium that they aren't in. 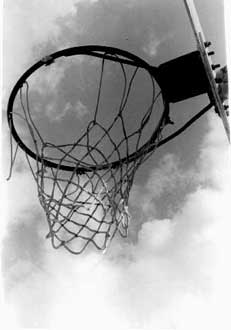 Paul: I hope your seats have comfortable edges, folks, because I have the feeling you're going to be standing for the duration of this one. This has all the makings of a down-to-the-wire nail biter!

Dickie V: Oh God, I hope this one doesn't go into overtime!

Dickie V: No, I've got somewhere to be!

Dickie V: An appointment at the fertility clinic! I've been trying to have a baby, baby!

Paul: I didn't even realize you were married, Dickie! I wish you and your wife all the luck in the world.

Dickie V: I don't have a wife, I'm driving to the lane solo on this one! I tell ya, trying to conceive a child by myself is proving more difficult than I had anticipated! I'm pretty sure it's just my technique though, once I learn to plant my feet firmly and follow through with my wrist the right way I'll be gold!

Paul: Well, I hear there's a- oh my God a tiger has run onto the court and mauled one of Florida's players! That boy's face is just dangling there like a clump of stringy cheese hanging off the side of a slice of pizza!

Dickie V: I'm always telling young players that you've got to have the passion and the drive to keep your face attached to your skull or that will happen to you every time.

Paul: But wait, the officials have blown the play dead and are congregating at the score table... and they're signaling that the tiger did not check himself in before the play! The mauling has been taken off the scoreboard! Oh, what a tremendous error by the tiger.

Paul: That tiger does not look happy, and he's showing some serious attitude to the head referee. If he doesn't watch it, he'll be - yes, there we are. He's been thrown out of the game. Florida retains possession of the ball with twelve seconds left in a tie game. This is make or break time.

Dickie V: Now you've got to win or go home, baby! And if you live in this stadium, then it will take at least a few hours for everyone to clear out of your home. Then comes the cleaning crew. I guess you'd be looking at a bedtime of somewhere around 1:30am.

Paul: That's just not an acceptable bedtime, not in the least.

Dickie V: Exactly, which is why you want to win.

Paul: Speaking of which, the clock is running out as Florida advances the ball past half court. There's a man wide open under the net. They lob him the ball... AN ALLEY OOP WINS IT! Oh my GOODNESS what a play!

Dickie V: Did you see that slam dunk? You've got to be kidding me! A dunk couldn't be more beautiful if Tyra Banks was dunking and the severed head of Charlize Theron was the ball!

Paul: And what's this? The Florida players are removing their uniforms and revealing Duke uniforms which had been hidden beneath! I can't believe it! After getting eliminated this past Thursday evening Duke makes a miracle comeback with the trick play of the century!

Dickie V: That's why you practice in the off season, so it pays off big time in the big game! What a miracle win!

Paul: Absolutely. When everyone else counts you out, including the tournament record keepers, the only people left to believe in you are your teammates.

Dickie V: This was one for the ages, my friend. Who could have possibly seen this coming?