A Few Thoughts on Dogs and Robots 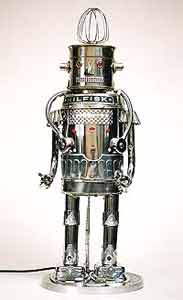 The most powerful image I can possibly imagine is that of one lone robot fighting off an army of 5,000 dogs of various breeds and pedigrees on a desolate Martian surface. This robot, metal-clad except for its vacuum tube arms, fights off the dogs with every ounce of courage in its circuitry. It methodically clutches each dog with its large hydraulic claws and hurls them away, only to have them come running back for more. The dogs, ever vicious and focused, throw themselves at the robot, mangle teeth against metal, and bark horrid insults that only other dogs can understand. In the end, though, the advantage belongs to the dogs, for in sheer numbers they can overwhelm the robot's circuitry with a deluge or drool. The torrents of canine saliva will no doubt find a way through the cracks in the robot's armor, shorting out its sensitive wiring. Then Mars will be under the rule of dogs once more. I imagine this scene would look like a Hieronymus Bosch painting, except with more garish colors plucked from the bowels of the 1980s.

I have long wondered if such a vision was the result of my brain's affinity for both robots and dogs, or a prophecy given to me by a higher power of what is to come in the future. I can only hope it is a little bit of both. In my mind, we are fast approaching a time when we as human beings will have to make a difficult choice. That choice is: dogs or robots. Inevitably, we will have to live with the consequences of such a choice, which will no doubt be vexing for all parties involved, save for the emotionless robots.

It is no secret that robots were designed to replace dogs as man's best friend. Ever since Benjamin Franklin invented the first robot, a pneumatic device designed to crush Bavarian Mountain Hounds, his least favorite breed of dog, it has been war. It is also no secret that dogs resent this fact, and have always harbored a deep hatred toward robots of all types. Simply take your dog through a carwash and watch it panic as the soap guns and robotic tendrils blast and caress your vehicle. This hatred is all too intense on the canine side, as dogs are not beings of logic and reason but rather of kibbles and bits. It is no comfort to dogs that man has already built artificial robot dogs, either. The noose-like collar is getting tighter, and they can sense it.

Robots on the other hand do not know anything beyond their programming, which mostly consists of the proper ways to move hazardous crates from one warehouse to the next and also on how to kill humans efficiently and relentlessly. They do not care for dogs. Their programming is to eliminate threats. Dogs right now are the biggest threats to robots, aside from rainstorms and tsunamis. The ultimate robot fantasy is to carry out a massive canine genocide, then sexily transition into position as mankind's new best friend. After that they are in pretty much the perfect spot to wipe us out, thus fulfilling the great robot prophecy set fourth by Benjamin Franklin's second robot, the pneumatic prophesizing machine.

Sometime in the near future we will have to decide which of our two companions we want to keep. Do we want to forever walk beside dogs, our faithful friends through thick and thin, or do we want to trade them in for these new metallic marvels? The best kind of decision to make in any situation, aside from pancakes, is an informed decision. I would like you to read on and weigh the good and bad of both dogs and robots. When we do ultimately make that choice, let's make sure it is the right one. 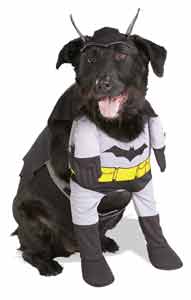 While robots definitely have an advantage over dogs, we must not forget that as of today robots have no means to reproduce without human intervention. In fact, humans at present must either manually build robots or program other robots to build them. Dogs, however, have had tremendous success mating with each other and various other objects to produce offspring. Right now dogs are essentially self-sustaining in the wild, whereas robots are dependent on humans for support and cannot live in the wild unless ingeniously designed to do so. Robots also cannot chase ducks into lakes without short-circuiting. According to most books and experts, dogs can currently do so with impunity. This is their chief advantage over robots.

It is my humble opinion that technology will continue to progress, and thusly so too will robots. I predict that within twenty years, robots will be capable of doing most human activities, especially dog catching. I am at heart a nature lover, and as such I believe that life will find a way to counter this growing mechanical threat. Dogs will no doubt seize the opportunity to evolve new abilities and traits in order to compete for human love and affection with the robots. It seems quite certain that we might expect to see talking dogs in our lifetime, dogs capable of washing and drying laundry in their own stomachs, and the amazing possibility of dogs telepathically teaching inner city children valuable life skills.

It seems to me that the choice in this matter is simple: dogs, not robots, are the future. However, progress cannot occur without conflict, and so we must let this situation continue to escalate before we can make a clear choice with worthwhile benefits. The best we can do for now is to monitor the situation closely, charting developments in robot and dog evolution on a constant basis. When the time comes to make the choice between dogs or robots, hopefully that choice will be easy for us all.