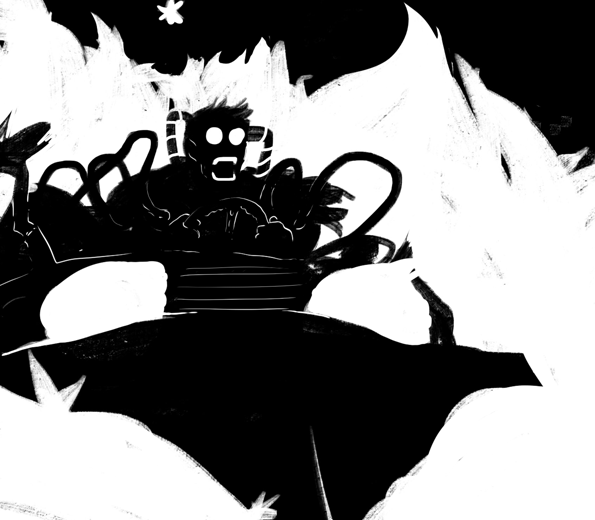 I turn around and see my truck being smashed into a snow bank by another truck. It looks like mine but more beat up - it's covered with paint scratches and blood - and the walls of the cab have been ripped off. The driver is fused to the truck. Wires run from the steering column into his arms like veins, and a pair of tubes connect his eyes to the dashboard. He turns toward me and revs his engine - a sound somewhere between a growl and a scream.

I start to run, but slip and fall on some ice I forgot to salt. The truck roars toward me, its plow a giant, ravenous mouth. My life - mostly just memories of plowing snow - flashes before my eyes like an emergency weather bulletin.

I try to get up, but slip again and something rolls out of my pocket. It's an empty crack globe. There's a little house and some trees inside, but no snow, which makes it look kind of ominous. Like the snow has escaped and is going to fall on the earth forever.

William "drawbot" Cook described this illustration assignment as "the perfect way to get back at winter"; contact him here if you'd like to commission other forms of artistic revenge against seasons!