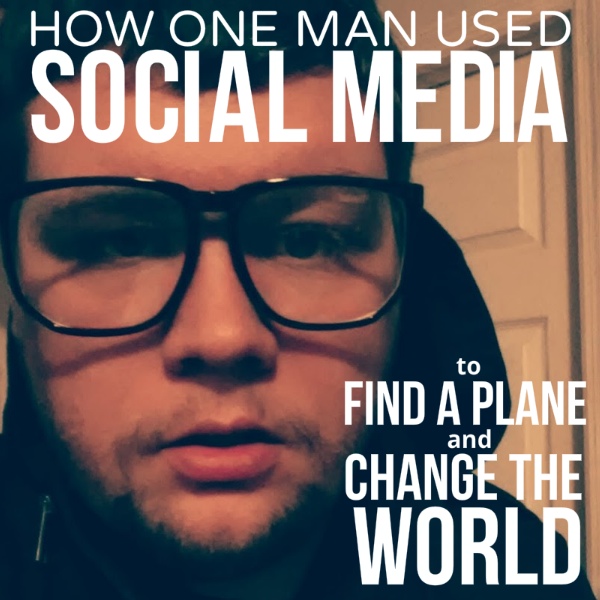 Often as social media gurus, we find ourselves preoccupied-- even fixated-- at the concept of branding. What is a brand, anyway? Does it have value? Is it tangible? What the heck can I do with one once I've got it? We're all familiar with megastar brands like Pepsi, the Baldwins, Bono, and so on. But are we in the industry so fixated on the journey that we've lost sight of the destination?

As the Malaysian Airlines flight 370 mystery compounded upon itself to turn into an unprecedented international cooperation disaster, it seemed that most bystanders on social media outlets were able to help little, if at all. A few used the power of digital brand social to search Google Earth for clues, but even the most concerted efforts found little more than other plane crashes and garbage.

In fact, the entire operation seemed to be floundering until Michael Hale took to social digital to deliver a hashtag-ready call to action. It is this rallying cry, we believe, that helped one social media pioneer leverage the digital cloudsourced branding effort to bring order to chaos.

The plane is fuckin missing. Can't be that hard to figure out gang. Let's find it.

Reaching his target demo in one targeted effort, Michael "Dogboner" Hale effectively leveraged the social sphere and revolutionized the digital social revolution amid widespread brand confusion and aenima. The response was widespread-- even reaching the Malaysian government itself, which felt a new compulsion to announce the ultimate fate of the flight, hours later.

Having effectively spent his social capital and disrupted the status quo with a unique brand story, Michael took to Twitter to further explain his role in helping end the mystery.

13 hours ago i posted that we should find the plane. today the search is over. thats the power of social media gang

We were lucky enough to catch up with Michael and we exchanged a few words about how he was able to pull off the most meaningful social media campaign in years.

SA: Do you have any advice for the airline officials worldwide, who are now perhaps a little more aware of some unforeseen dangers associated with air travel?

Michael: Great question. While I don't believe that air travel will ever be one hundred percent safe, a statement that rings true for any other method of transportation, I think we can expect this latest incident to have a significant influence on the future of this industry. It may be possible that we will see a sort of ripple effect with regard to safety procedures, advances in technology etcetera. Bear in mind that we haven't located the flight's onboard black box recorder, which holds significant information about the incident that could be the key to unlocking the mystery of why MH370 descended into the ocean.

SA: So what aspects of this hypercommunitized digital communication allowed you to wrangle the broken international effort into finally determining the fate of the plane?

Michael: I have a lot of followers and people generally agree with my opinions and do what I say. Back when Kony was happening, I said we should stop Kony and then that guy got busted for jacking off. Not really what I had in mind, but it was eerily close. I was jacking off when I heard. CNN was on. I wasn't jacking off to CNN, it was just on in the background. I have jacked off to CNN before but I wasn't at that time.

SA: Do you have any ideas on air safety in general, after having solved this ordeal?

Michael: One idea I had for making it really safe was to make the bottom of the plane out of boat material so it can float. Another idea I had was to have a sea captain onboard, or someone who knows the oceans really well. Ideally, you would want to keep the plane in the sky, but as i understand it, that's just not possible 100% of the time, so it would be good to have someone on board with sea legs to navigate the oceans depths. And they should make the whole plane out of the black box. Just kidding.

SA: If you could say something to the officials who bungled the search for over two weeks until you took control of the scene, what would you say to them?