Is Faerun Ready for Its First Orc President?

Early orcs were barely better than animals.The idea of being able to play an orc was revolutionary and totally changed the dynamic of the game. Suddenly orcs were not just these soulless foes to be defeated, they were real living things with their own dreams and aspirations. As I wrote in my paper, the Anglocentric viewpoint of Gary Gygax (R.I.P.) and the other TSR developers created a world in which only whites were seen as human.

Now, sure, you could play a black guy in D&D, there was nothing that said you couldn’t, but until much later you never even saw a hint of anything but white people. Heck, it wasn’t until 1985’s Oriental Adventures that you could even play an Asian person and when you think about it they are just smaller magical white people, which is what elves are.

Anyway, in this context, the orcs were basically the stand-ins for all undesirable minorities, but particularly blacks. I’m sure you’ve heard that theory floated before, but there is more than a hint of truth to it.

Unless played very carefully early Dungeons & Dragons could easily become a proxy race war, with your group filling the shoes of the noble white power crusaders seeking to extinguish any orc war bands or goblin villages they happened across. Goblins are metaphors for the Vietnamese, by the way, but that’s a different conversation for a different time. Oh, and before you say it, Drow are not black people too. I hear that all the time from people who don’t understand Drow and it bugs the crap out of me. Drow represent the evil and duplicity that lurks within all of us, just beneath the surface (get it???), but particularly within the hearts of women. 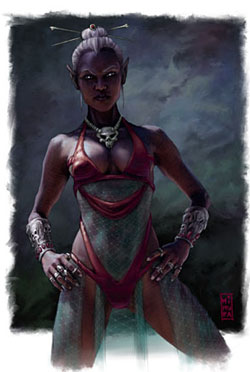 Hot babes with a purpose: Drow are always hot babes or Driz'zt because their evil is seductive to us... I always managed to avoid that sort of racist garbage in my campaigns by humanizing the orcs and other sentient monsters. Players could parlay with orcs rather than slaughter them outright, they could even trade with them or become friends with them.

One time I even roleplayed a very interesting romance between my buddy Mike’s brother Jason’s character, a female elf wizard, and a very sensitive orc shaman named Hurglurg. They never did consummate that relationship because I have trouble even imagining sex with anything but hot babes, but they did develop a meaningful relationship that probably would have eventually produced a half-orc.

So, again, imagine my excitement when I learned that the creators of Dungeons and Dragons had finally decided to address the racism implicit in the dynamic of the human/orc relationship. At last players would be allowed to step at least halfway into the shoes of these primitive tribes they had been slaughter for years. Progress!

Then I noticed that being a half-orc modified your statistics from the human baseline. And they have special abilities. And their descriptions is, well, it is revolting.

See for yourself, via Wikipedia:

Half-orc characters receive a +2 modifier to strength and -2 modifiers to intelligence and charisma ability scores. Half-orcs have darkvision up to 60 feet. They have orc blood and are susceptible to special effects that affect orcs. They can use orc-only items. All half-orcs speak common and orc; they may also speak Draconic, Giant, Gnoll, Goblin, and Abyssal, and, in the rare cases of half-orcs with high intelligence, the languages of their allies or rivals. The orc language has no alphabet and uses Dwarven script. Orc writing is found most often in graffiti.
The half-orc's favored character class is the barbarian. The half-orc personality tends to be short tempered, sullen, and prone to action rather than thought. Half-orcs prefer simple pleasures: feasting, singing, wrestling and wild dancing. They have no interest in refined pursuits such as high art and philosophy. Half-orcs tend towards chaotic alignments, but have no clear preference towards good or evil. Half-orcs raised and living among orcs are more likely to be evil.

A few sections of that stand out as particularly offensive to me.

Half-orc characters receive a +2 modifier to strength and -2 modifiers to intelligence and charisma ability scores. 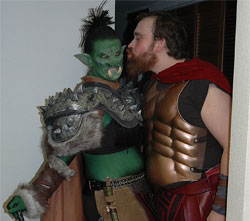 Does this picture make you mad or make you sick? Bad news...you might just be a racist.Okay, we’re off to a bad start. I can sort of accept the strength modifier. That’s purely physical and genetic and I think it is okay to note that sort of thing as long as you accept that there is a wide range of possible scores even with that modifier. Half-orcs, like blacks, are probably more likely to be strong than other races, but not way more likely, and not a ton stronger unless they are doing point buy and playing a fighter, in which case that +2 is a big deal.

Where the whole thing goes off the rails is the modifiers to intelligence and charisma. I’ll deal with the charisma one first, because it’s slightly more acceptable. The half-orc is living in a white man’s world, so the modifier to his charisma represents a perceived deficit rather than an actual deficit. He has trouble interacting with the whites and the elves because they are inherently bothered by the sight of a half-orc. What is wrong is that it should be noted that way, not applied in a blanket. What if he’s dealing with an orc or a goblin or something? Don’t you think he’d have an easier time of it than a human? He could probably even pass for orc if he’s green enough.

As for the intelligence modifier, that’s pure bias and it disgusts me as much as the biased aptitude tests and IQ tests we use to assess kids in the inner city. The problem isn’t with the half-orc, the problem is with the score. Give the half-orc a test about building a hut or fashioning an axe out of a dragon’s jaw and I bet he will score way higher than some high-falutin’ wizard from Waterdeep.

Okay, you might say, they have to explain the difference in game terms to make things more interesting. You’re willing to give them a pass on that? Fine, because parts of that second paragraph are way more offensive to me.

That’s just blatant. Half-orcs go “ooga booga” and like to eat ribs? Simple pleasures, my ass. That is straight up racism. It gets worse a couple sentences later.

They have no interest in refined pursuits such as high art and philosophy. 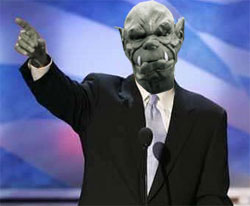 A reality for Faerun? Not likely, but maybe for us...That’s the sort of closed-minded bunk the white man said about the savage Indian when he first came to the New World. They saw some beads and feathers, scoffed at it all, and then gave the Indians a bunch of contagious blankets. I’m sure whitey wasn’t feeling quite so superior when he suddenly needed those Navajo guys to be Wind Talkers like in that movie with the guy from Face/Off. Or when they realized all that “ooga booga” around a campfire was actually songs about Father Crow and not just some stupid nonsense.

The description of half-orcs does redeem itself a little bit at the end by pointing out that orcs are not more likely to be evil than anyone else. Thank god they admit that, because if they had suggested the opposite the racist smear against orcs would have been complete. It’s not enough though, and the book comes out and admits that half-orcs are accepted by no one. They are outcasts from both orc and human society.

So, sadly, the answer to my question is “no”, Faerun is nowhere near ready for its first orc president. Is America?

Watching this election on TV I have been inspired by the idea that a half-black can be America’s president. He proves that the intelligence, the yearnings, and the aspirations of all races are the same, it just depends on your alignment. To paraphrase black presidential guy Barack Obama:

“The dreams of the chaotic good elf who lives in the trees of the High Forest are the same as the dreams of the neutral good orc who learns on the streets of Zhentil Keep.”

Will ancient prejudices prevent our half-orc from leading humans, elves, dwarves, and gnomes or can Barack Obama overcome the odds and his -2 Charisma to become America’s next ruler? Or Shi Tal!