Stuff You Will Hate IX!

Semi-retirement is pretty sweet. These days, Sgt. D and I delegate most of our writing responsibilities to talented others, then spend our free time counting the days until that new Fight Fair drops or just chilling out with some Canaan, respectively. But once a month, Stuff You Will Hate sends out its signal (not so much a beacon in the sky as the emitting of a pungent stench), and we begrudgingly sift through shit to find the few kernels worth mocking. 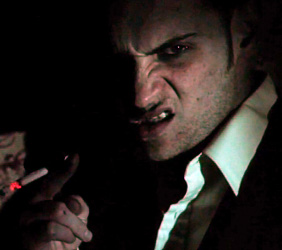 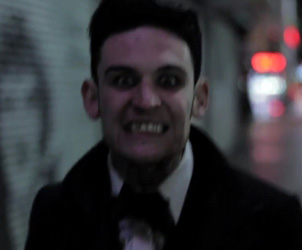 Best known as frontman for the A.F.I. tribute band Aiden, Wil Francis also performs Killers covers under the name William Control. Imagine if She Wants Revenge were fronted by a ghoulish A.W.O.L. member of Tiger Army instead of by some 50-year-old failed rapper. Anyway, some of the songs relegated to this side-project are unconscionably bad, like this preposterous exercise in drug-listing, rap-talking and grand-social-statement-making. By comparison, "Only Human Sometimes" seems fairly listenable, and it even contains a Human League reference, not that anyone who listens to William Control knows who the Human League are or would know what to make of them if they did.

The "Only Human Sometimes" video attempts to please everyone, by showing Francis cavorting with some Suicide Girl sorts (I'm not sure who encourages bands to film videos in which they make out with assorted vaguely attractive women -- is there anyone actually clamoring for this, or do the musicians just say "I don't give a fuck if anyone wants to see this, I'm doin' it!") and then showing these dirty, pretty things making off with his kidney (this addresses a more understandable demographic, people who want to see Victory recording artists robbed of their vital organs). -GD 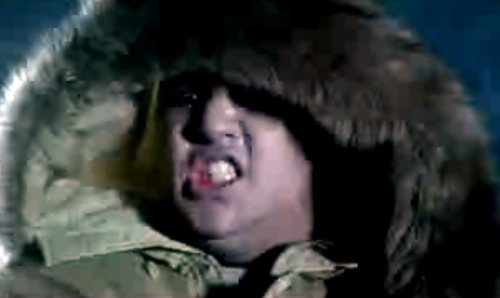 On Broken Wings, "Frozen Over"

This video, song and band are so dreadfully boring that I can't find anything more noteworthy about them than the fur-lined hoodies these guys are wearing. I also used to have a fur-lined hoodie, but I stopped wearing it after an unfortunate incident on New Year's Eve, 2008/2009.

I went to a party hosted by my best friend Tony, who is a homosexual. I wore my fur-lined hoodie in a mostly futile effort to keep the cold Seattle winter night at bay, and I caught such a chill that I kept it on even after I was inside. I immediately got down to business: trying to hook up with his (female) roommate who we'll call X. Everything was going to according to plan until one of Tony's homo friends kept putting the moves on me -- apparently my fur-lined hoodie made him think I was also a homosexual. No matter how many times I told this homo I wasn't gay, he kept sweating me.

I guess he thought I was playing hard to get, because he told me several times how big his dick was. "Bro, I believe you," I said, "but the reason I don't want to fuck you isn't because I'm concerned about the size of your dick, it's because I'm not gay. I'm trying to fuck X." With that, I walked off to use the bathroom, and next thing I know he barged in behind me. He grabbed my shoulder, a twinkle in his eye, and said "You don't believe me? Wanna see it??" I'm always down to see a stranger whip out his dick, so I said "Sure, why not?" and he showed me his semi-erect penis.

I'll admit, it WAS pretty big -- maybe 7" at halfmast. "Touch it," he whispered. I laughed, because I realized that he actually did think I was gay and that he was about to get lucky, so I just gave it a little squeeze and said "Honk honk!" and walked out of the bathroom, leaving him with his red, swollen penis in his hand and a confused look on his face. To make a long story short, less than an hour later I did indeed eff the roommate. That night I touched both a penis AND a vagina, both belonging to people I had known for less than two hours. And I never, ever wore that fucking hoodie again. -Sgt. D 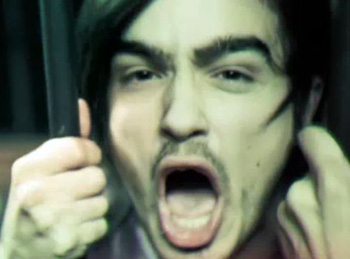 So, what you in for, pedo-stache?

Agraceful, "A Prophecy in Reverie"

This is yet another crap effort from director Robby Starbuck, the infamous shit-merchant behind videos for many of the least-interesting bands of today, such as I See Stars, Silverstein, Breathe Carolina, and Dance Gavin Dance. Every "Autotune-and-breakdowns-for-Christ" band seems to regard him as some kind of visionary genius, probably because they are all dumb, 20-year-old Christians who can't see what is obvious to anybody with functioning eyes.

For example, what exactly is the concept here? It's essentially just the same performance video you've seen a thousand times before, only the band is in a jail cell for no obvious reason. They appear completely oblivious to their surroundings, faux-rocking out and doing a few forced, soulless guitar flips in an attempt to do something other than just stand in place pretending to play their instruments. There's no plot, no dramatic moment in which it is revealed why the band is incarcerated, not even any costumes -- looks like this facility's remarkably lax dress code includes To Write Love On Her Arms T-shirts. The execution is as disappointing as the concept, with visual fanfare limited to a few seconds of the singer doing jumping jacks and some After Effects color-shifting filter applied every now and then. If this is genius, one can only wonder what incompetence looks like.

The best thing you can say is that Mr. Starbuck apparently has access to a good camera, which makes me think he's like that kid who you pretended to be friends with in high school because he had a pool: Maybe all these bands know he's a hack, but don't have any alternatives. -Sgt. D 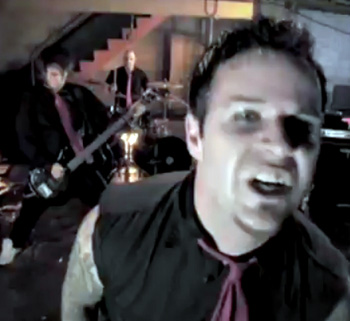 The Autumn Offering, "The Curtain Hits the Cast"

As Stuff You Will Hate readers know, many bands are so bad they're good. Autumn Offering is not one of these bands. They are also not terrible, though. They're the epitome of what I like to call "C- metal." The band (and this video) are the closest thing there is to generic metal, like the literal exact average of all active metal bands.

The out-of-work strippers in the video aren't ugly enough to make you cringe; the singer's phony, contrived mannerisms (probably cribbed from a video by some other completely unnecessary band like I Am Ghost) aren't absurd enough to provoke more than a rolling of the eyes; and the song itself is, well, just kind of dull. The only part that actually managed to irritate me was how the band members are all wearing ties, doubtlessly congratulating themselves on re-contextualizing a symbol of mainstream conformity into a postmodern representation of their deeply held belief in individuality and personal expression.

In many ways, this kind of "extremely-mediocre" metal is the most offensive kind, because it takes a little piece of your soul with every song and leaves you with nothing to show for it. You watched some shitty band's shitty video, but you didn't even get to laugh at it. You just walk away feeling like you pissed away three minutes of your life. Now imagine how the publicists at Victory feel when they have to pretend they actually like this band. -Sgt. D