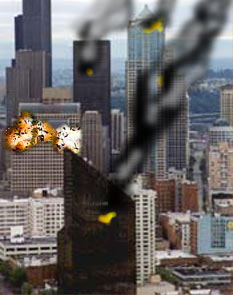 Seattle is going down!Seattle is in ruins. Well, perhaps not quite ruins, but according to newspapers a bunch of protesters have been trying to "reclaim the streets" and they want to send the city into a frenzy of anarchy. It is my solemn duty to report to you that in these riots Lowtax himself was gravely injured. His usual 1950's hipster attire was mistaken by authorities for a sign of allegiance with these chaos seeking hooligans and police rained gel rounds down on his girlish frame. Rich's family informed me that he has been hospitalized in "stable but suspiciously effeminate" condition, although unless he has a relapse things should be alright.

Knowing that one of my "friends" has been so horribly victimized by these anarchists made me curious about their long term goals for a city engulfed in the raging fires of anarchy. Most revolutionary and anti-government groups seek to reshape a city or government in the light of an ideal that they hold dear. Anarchists, however, just plain want things to be crazy. With my inquisitive scientific mind and my contacts with an anarchist street gang known as "The Hip Waders", I've pieced together an outline of these firebrands and their plans for a Seattle utopia. Since they will inevitably win out over the beleaguered Seattle police department I am also going to offer advice for surviving their unpredictable reign of terror.

Membership: Fluctuates constantly, the core consists of three guys in flannel and Birkenstocks sitting in their mom's basement.
Political Goals: To "take back the streets" of Seattle, possibly to have all the pavement removed to be more hip and anarchic.
Methods: Yelling really loud, swaying back and forth chanting about oppression and hope, holding up photo enlargements of that dope in Italy who got capped for protesting. If the anarchists are provoked they may chain themselves to something like a street light or a cat.
Famous Supporters: Ed Begley Jr. and Cher, possibly also the guy who played Robocop in Robocop 3, which is pretty ironic.
Resources: Anything they can find in the pantry of their mom's house, several thousand photocopied flyers, and photo enlargements of that dead guy from Italy. One of them is rumored to own a 1987 Chrysler Le Baron with red primer spots on the door.

The N-AF's Vision of a Perfect Seattle

Government: All city officials will be replaced with a single "Fun Chief". The Fun Chief is installed into office for 36 hours and is not allowed to leave or have any contact with the outside world. He is locked alone in a room with a typewriter on which he can write any new laws or rules and leave them behind for the next Fun Chief to enact. The Fun Chief cannot enact new laws. The Fun Chief is elected by placing video cameras just inside local McDonald's restaurants and videotaping people entering the store. The faces of the patrons will be translated mathematically to a computer that then randomly selects the next Fun Chief by pointing a stick at an entry in the Seattle phone book. Any time the computer misses the phone book with the stick a list of unlisted phone numbers is generated and taped to a wall. The previous Fun Chief will be fired from a cannon at the wall and the person's name with the greatest concentration of his brain matter adhering to it is selected as the new Fun Chief. It should be noted that businesses can be elected Fun Chief.

Law Enforcement: The Seattle Police Department would be under the direct supervision of the Fun Chief, who is not allowed to leave his office and cannot interact with anyone in the Police Department. Current police officers and cadets would be given severance pay of a small suede sack containing jelly beans with "MAGIC BEANS" written on the side. The jelly beans would not be magical. New police officers would be drawn from the ranks of the sanitation department, who would have their salaries doubled and be issued new uniforms of top hats, tuxedos, and golden monocles. The police would drive garbage trucks but instead of containing garbage the trucks would contain either fresh tacos or hornets. The emergency number would be changed from "911" to a random string of 42 digits generated by an online dice-roller that would be updated hourly. Five lucky police officers would also be assigned to "jet patrol". Jet patrol will consist of officers stationed on the tops of the tallest buildings attempting to catch or otherwise subdue passing jet aircraft. Only elite cops are allowed into jet patrol. The SWAT team would also be replaced with a group of singers who raid drug operations and sing "happy birthday" while sobbing.

Other Emergency Services: The Seattle Fire Department will undergo no manpower adjustments. Instead, anarchy will be achieved by installing powerful flamethrowers in every home and apartment in the city. At random intervals these flamethrowers will activate and a signal will be sent to the fire department's dispatch system. The fire fighters will be instructed to go to a completely arbitrary address by the computer. This could be one of the houses on fire but odds are very low that this is the case. In any event, their tanks of foam will be filled with technical animal fat and fire hydrants will produce nothing but past-expiration hot dogs.

The Justice Department: Prosecutors and District Attorneys would find themselves out of a job in the utopian future of the N-AF. All who are put on trial, no matter how trivial or severe their suspected crime, must immediately spin "the wheel of sentencing". A third of the wheel is devoted to "nothing this time" and a third of the wheel is an assortment of punishments ranging from a small fine to a public hanging. The final third of the wheel is a variety of fabulous prizes. Judges will still be needed as someone has to execute the criminals or take them to the "prison pit"; a pit filled with slowly solidifying Jello located near the border with Canada. Off duty judges will also be responsible for protecting the Fun Chief from the Cossacks flown in especially to constantly harass his administration. 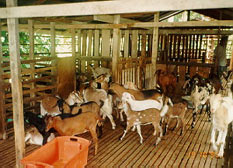 For obvious reasons the trash goats are kept separate from the goat cheetahs, which are caged with the jet sharks.Sanitation: Without the garbage men around to clean things up the anarchists will turn to nature's garbage men; goats. Several hundred thousand goats will be released every Wednesday morning to eat all of the trash. At noon several hundred thousand cheetahs will be released to hunt and kill the goats. At sun down the jets captured by the jet patrol will be dropped from the sky crushing the cheetahs and ending their threat to the safety of the city. In the event that the goats are unwilling to eat the crashed jets, sharks will be released to eat the jets.

Public Transportation: Buses would run randomly behind or ahead of schedule. The buses themselves would be painted bright red and say "GOOD LUCK" on the side in big yellow letters. The destination of the bus would be unknown until it has arrived. One in five buses would be driven by a convicted sex offender prematurely released from prison to drive the bus. The remainder of the buses would be operated by remote control on the same wavelength as the most common garage door opener used in the state of Washington. Seats inside the bus are randomly ejected upwards at speeds of up to 500 miles an hour. NOTE: The top of the bus ceiling does not slide back, although you may be propelled upwards at sufficient speed to force you through the steel frame.

Education: The curriculum of all schools will be inverted so that high-school seniors are taught finger painting and kindergarten students are educated in calculus and chemistry. Of all the changes planned this one is expected to have the least effect on the status quo. To compensate for this shortfall in their planning, the N-AF has developed a mascot known as "Juicy" who will travel from school to school teaching all students about the dangers of oxygen. Juicy will show photographs of drowning victims smiling, an astronaut in space without a space suit giving a thumbs up, and a video about how happy it made a man to lock himself in his garage and run his car for hours. Juicy will then hand out candy that is supposedly made from nitrogen but is actually made from oxygen. When the children say how good it tastes he will call them "filthy goddamned lying whores" and slap them.

Traffic, Street Signs, and Monuments: Traffic lights will no longer be needed and will be removed entirely. "Don't Walk" signs will alternate between "Snap", "Burst", "Aim", and "Reload". Street Signs will be covered with advertisements for a jet school where people can learn to fly jet planes. In reality this will be the training grounds for the jet patrol and anyone taking the course will be caught by the jet patrol and forced to spin the "the wheel of sentencing". Any monuments or historical landmarks will be razed and replaced with bronze statues of Juicy. Seattle will be renamed "Neo Tokyo" because Ron, the guy whose basement the N-AF always meets in, really likes anime.

For those of you unlucky enough to be living in Seattle during the shift to Neo Tokyo under the control of the N-AF, it is important that you heed my warnings and follow these tips for survival:

With any luck the N-AF's efforts will fail, although I wouldn't hold out much hope; those anarchists are nothing if not tenacious.

The Aliens Pose a Threat

K-Dog has supplied us with an epic Flash animation which is set to the music of Semi Automatic Turban and tells the tale of an alien invasion and the secret behind SA Turban's groovy tunes. Check it out!

Absolutely incredible! So hurry up and watch it or explore the splendor of the Semi Automatic Turban site!