Reading Time: The Master of Makeup

Still more unmarked months have passed, most of which pitiable Stevie has spent alone. He watched the decomposition of his dead host Hepzibah with curiosity, then revulsion, then briefly arousal, then revulsion again, much stronger this time. For a while, the uppity talking panther kept him company, but he's now quite dead, because panther meat tastes better than no meat. Stevie subsides almost entirely on talking animals these days; he can't remember the last conversation he had that didn't end with the other party begging "please don't eat me." 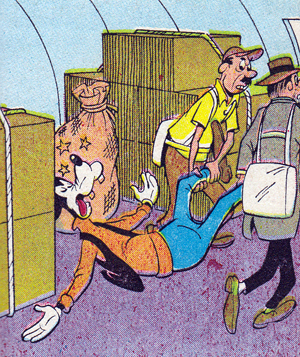 Most recently, Stevie encountered an oddly-dressed dog being dragged through the desert by swarthy vagabonds. The bandits explained the dog had been disciplined for "lack of respect, wrong attitude, and failure to obey authority." Stevie devoured the dog, which did not taste particularly good. However, he let the people escape unscathed, because he had no desire to eat human flesh. Yet. As far as that goes, Hepzibah's corpse wasn't helping his appetite. But no animals had passed in some time. The trouble with civilized animals is that they can warn each other away, or use their marvelous judgment to avoid what clearly appears to be a bone-strewn Grendel's lair. Only humans were boldly stupid enough to venture near Stevie -- like the perfectly average-looking man approaching him right now.

Man: Hey there, big fella! Can you spare a bite for a weary traveler? And while you're at it, could you let me slug down a bit of your water? I don't have much to offer, friend, but I bet dollars to donuts I can tell a story that's worth your while!

Stevie: I don't like your words. I will give you a food to stop your talking mouth. Here is dead dog hand to eat. No, that is a wrong way. The hand is under a white skin thing, you have to pull it off. You are a dumb. Why are you not dead?

Man: Well, chief, I know a trick or two. Take this little gadget, looks just like a pen, don't it?

Stevie: Give it to me. I can write my name. It is Stevie.

Man: I can see that, Stevie. It's written all over the walls, and it don't look -- or smell -- like you used a pen, either. Thing is, though, this ain't a pen. We call 'em "Facey Strikes," cute name. Almost cute enough that it makes you feel better about watching a man choke to death when the gooey skin from his melting face starts clogging up his throat. Well, you don't really have to see that. Facey Strikes make a lot of smoke, thank God. But it sure sounds nasty as hell. 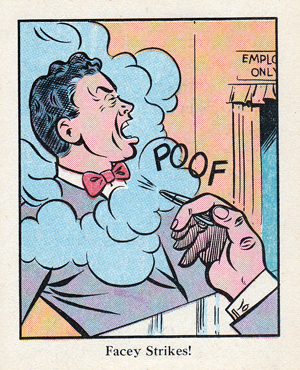 Man: Now, Facey Strikes cost our bosses a pretty penny, so of course they taught us all about hand-to-hand combat, too. This karate chop might not look like much, but if you look close, you'll see that it knocks a man's eyes straight off his mug. This poor old sap ended up with just eyebrows and glasses, neither one doing him a damn bit of good. 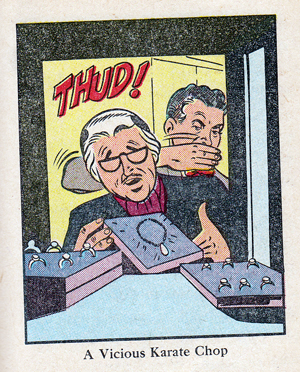 Stevie: Was he a villain?

Man: Um, yes. That jewelry he made, it was like poison, in a way. People could die if they ate too much of it, of if they swallowed it wrong.