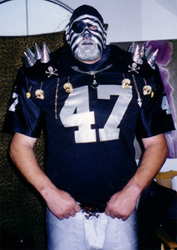 Your typical SomethingAwful reader.For whatever reason, Lowtax wants me to write about football for SomethingAwful. I guess because this site attracts huge amounts of popular jocks. Heavens, there's no way some nerd would ever visit a site such as this! SomethingAwful is a site for frat boys and middle-aged men who paint themselves blue and stand around in stadium parking lots cooking chicken while screaming at a radio for eight hours.

So here's a bunch of mid-season NFL crap:

If you watch ESPN, then you know that Ben Roethisberger is the best quarterback ever and it's only a matter of time before he breaks Dan Marino's records. He's that great! I mean, he's only a rookie and he can already hand the ball off to running backs like a seven-year veteran.

You also know that Chris Berman will make the same joke on NFL Primetime every time the Steelers play a home game:

You will also hear the following great jokes:

Yes, we get it: the guy has a funny name and you can make all sorts of hamburger jokes about him.

Sure, Roethisberger is off to a great start, but it all broils down to the fact that it's only a matter of time before he gets grilled.

Wes Welker is the Most Talented Human Being on the Planet

Earlier this year, Miami Dolphins rookie Wes Welker filled in for injured kicker Olindo Mare and became the first NFL player since 1966 to kick off, return a kickoff and punt, make a field goal (29 yards), and hit a point-after all in the same game. He also made the tackle on one of his kickoffs. In response to this, Florida Today commented:

"Given that, it wouldn't have been surprising to see him sent out to take over at quarterback if Miami had gotten the ball back after Jay Fiedler and A.J. Feeley were both hurt on Miami's final drive of Sunday's 24-10 loss to the New England Patriots."

Why stop there? Since Miami's Dave Wannstedt resigned, why not have Wes Welker fill in as head coach? This guy played quarterback, running back, wide receiver, free safety, and returned kicks and punts and kicked in High School... I think this pretty much proves there is nothing Wes Welker cannot do.

Wes Welker is so great he could audible on the kickoff, do an onside kick, recover his own onside kick, then stand up and throw a pass twenty yards, catch the pass himself, run for a touchdown and kick the PAT afterwards. Wes Welker is so great he could just keep doing this over and over again the entire game -- never allowing anyone else to even touch the ball -- stopping only to sell concessions to people in the stands. After the game, Wes Welker would interview himself, find the cure for AIDS, and capture Osama Bin Laden all while making millions of dollars in the stock market and impregnating barren lesbians. He's that good.

Terrell Owens is -- without a doubt -- the NFL's most obnoxious attention whore. Every week, there's some of new controversy, some wacky little comment, or some hee-larious new dance. The guy just loves the spotlight, hell, he wears a hat with the URL to his website on it when he does interviews. Maybe you should visit his site, purchase his hard-hitting book, "Catch This! : Going Deep with the NFL's Sharpest Weapon," and then head on over to his LiveJournal so you can read up on how stupid he thinks girls are.

I don't understand why Jerry Rice is hesitant to retire, he has all this to look forward to!

But the prize for most retarded attention whore of the season thus far has to go to Bengals wide receiver Chad Johnson: before Cincinnati's game against the Cleveland Browns, he sent bottles of Pepto-Bismol to the Browns' defensive backs. See, because he was going to give the Browns' secondary an upset stomach! OH HO!

Johnson then proceeded to catch a whopping three passes for 37 yards. And he dropped four passes. The obvious joke to make here would be something like, "gee I sure hope Chad kept one of those bottles of Pepto for himself because his performance was SHITTY!"

For whatever reason, wide receivers tend to be the biggest attention whores. In addition to Terrell Owens, you've got Keyshawn Johnson (Chad's cousin), Joe Horn (famous for last year's "cell phone" stunt), and Jerry Rice, who is really close to becoming the Ricky Henderson of the NFL. To put in terms you can understand, Jerry Rice started playing in the NFL the same year Super Mario Brothers came out for the NES in North America! Now that's a long-ass time ago. Jerry Rice needs to retire to the Mushroom Kingdom and spend his remaining days chewing on Toad's head and inappropriately groping Yoshi when he thinks nobody is looking.

You know, this update kinda sucked. Maybe Wes Welker should start writing for SA: he's absolutely hilarious and his writing is better than Shakespeare and Tom Clancy combined!