The Truth is Out There 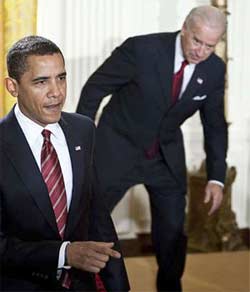 I've seen a lot of weird things in Washington over the past 40 years. At first I thought the weirdest thing was seeing how Newt Gingrich always takes his shirt off before he goes to the bathroom, even if he's just doing a number one. But in the past two years I've observed something even stranger: Progress, and lots of it.

Thanks to the support of the American people, we brought "Don't Ask, Don't Tell" to a long-overdue end. This destructive policy has hindered our military and prevented thousands of patriotic gays and lesbians from serving our country. Its repeal also means that those already serving won't have to live in secret, a burden nobody should ever have to endure. If watching the X-Files has taught me anything, it's that protecting secrets often comes at a very high price.

Passing health care reform was no easy task, but we did it. From ratifying START to curtailing Wall Street funny business and getting the economy growing again, we've made some truly remarkable achievements that will be remembered for generations to come.

But this is no time to rest on our laurels. Republican lawmakers are already threatening to undue our hard work completing the most extensive overhaul of the health care system in history and send this country spiraling back into the depths of recession.

There are times when this town can get you so discouraged that you're ready to give up. I felt that way toward the end of season 2 of the X-Files, when it seemed as though they were hell-bent on killing Mulder. I remember cussing up a storm to my staffers. I felt like if Mulder wasn't going to be around, I wasn't going to be around. But as we learned in "The Blessing Way," Mulder survived thanks to some quick thinking on the part of our Native American brothers. The goals this administration set out to accomplish will survive just the same.

That didn't stop me from getting mad when the Republicans threatened to repeal the health care reforms we fought so hard to pass. I got so furious I had to call my buddy Mike Traz and vent a little. As usual, Traz talked me down and assured me things weren't as bad as they seemed, then gave me a hot tip about an X-Files spin-off show called "Millennium."

I don't think I'll be able to get into Millennium as much, because it's a bit too heavy for my blood. I'm liking Frank Black a lot, and the first episode introduced me to a great new band called "White Zombie." Traz sent me a copy of "Astrocreeps 2000" and it's been on my Walkman nonstop for the past few weeks. Barack has already asked me to stop humming "More Human Than Human" all the time. Fat chance of that. 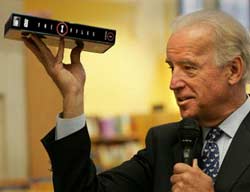 Speaking of new shows, Beau suggested I might get into a program called "Twin Peaks," which he said was a forerunner to the X-Files. I pulled the recordings he made back in the '90s out of storage along with a VHS player and powered through the first few episodes while finishing off a Christmas ham. It had a great premise, but I found the whole thing a little too slow and fruity for my tastes.

I'm glad I looked through those tapes, though, because I found a whole bunch of "Xena: Warrior Princess" episodes I plan to watch. Two beautiful women fighting monsters? I'll vote for that legislation any day.

It's been a busy month, but I even managed to make time for a one-on-one with Mark D'Arensbourg, one of our dedicated interns. I put Mark to work on an intensive holiday review of the "Mortal Kombat" games I've been hearing so much about lately. It was a real treat to watch him defeat foe after foe, sometimes beating them so bad there wasn't much left. I got so pumped up I challenged him to a match, but he was way too fast and I think my joystick must have been broken. The only drawback is after getting so immersed in the storyline, I accidentally called Barack "Baraka" once or twice. I tell you, he's got a glare that can melt ice.

We promised change when you elected us, and change has been delivered. But the job is far from over, and there are countless challenges left to tackle. Together with your support, the President, myself and the entire Democratic party will push forward to meet these challenges. Let's get started!

Thank you -- for everything,