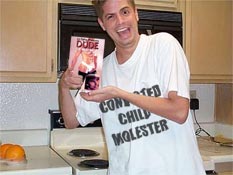 From now on whenever anyone makes fun of Lowtax on the front page they have to use this picture of him wearing his state-required "CONVICTED CHILD MOLESTER" neighborhood warning shirt.Many would think that I received so much hate mail I would not continue on to the rousing conclusion of my series on diluting racism with fake stereotypes. These vague "many" would be wrong however, as nothing provokes me into writing a second article like reams of angry e-mail. I'm not sure how you quantify e-mail into a ream, but it's a fair bet that I received at least three or four reams of venom soaked words. On top of that Lowtax attempted to make fun of me in his Tuesday update. He of all people should know that insulting me only drives me even further into the bosom of insanity, although he was probably too busy making a joke about putting something into something else and then putting even smaller versions of that into the smaller versions of the other thing and making us all laugh with a huge run-on sentence about things and smaller things and even smaller things. LOL-er-skates.

Listen and listen good Rich "Smoking Away the Writer's Christmas Bonuses on Crack Cocaine" Kyanka, I intend to devote my next thirty updates to detailed analysis of the German battle strategy during Operation: Barbarossa. There will be three updates about the battle for Stalingrad alone. I will include letters from soldiers that I bought on ebay and scans of me dressed up as a Waffen SS machinegunner. I will Photoshop my face over a Tiger tank commander's and write fan-fiction quality stories about blowing up all kinds of shit and then having sex with the entire cast of Hogan's Heroes. Oh yes, you fucked with the wrong motherfucker Kyanka, and this fucking motherfucker has a lot to say about World War II.

Pardon that outburst, but I had a score to settle. Back to the much reviled second installment of my two-parter on beating racism which, unlike the heat, can't be overcome by drinking a mint julep and relaxing in the shade. The theory behind this global community outreach program of mine is that the quickest and easiest way to sap the power out of racial slurs and stereotypes is to dilute them with a bunch of nonsense. Most stereotypes have a very slight basis in reality, but by overwhelming them with an avalanche of complete nonsense any meaning they have will be lost. Since most racists get their material by imitating other racists you should be able to go to a couple Klan rallies, rant about how much you hate black people by calling them "Blitzwings" and saying they "can't catch shit when fly fishing", and then sit back and watch the morons spread the good word.

I would also like to take this opportunity to make a correction. On Monday I said in my section devoted to African Americans that they had a "hard road to hoe". Based on an e-mail I received from PJ Forrence this should have actually read "PJ Forrence is a stupid nigger." This was an error on my part and I apologize deeply. 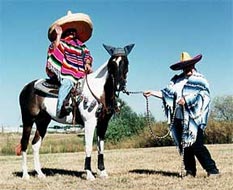 Mexican? American? Who cares?! They're wearing those crazy stereotypical sombreros so fuck them all!Current Status: Nearly as diverse in nationality and stereotypes as Asians, Latin Americans are just as prone to ridicule and racism as their Hentai-making friends from across the seven seas. They have generally integrated much more smoothly into "white society" than African Americans, but they suffer a similar kind of persecution. If you're trying to ask a Klansman's daughter out on a date it doesn't make much difference whether you're black or Puerto Rican. In the end you're going to get called mean names and either beaten up or murdered. The once exception to this would be Mexican Robots, because even KKK members know not to try and lynch a robot.

Unlike everyone else, Mexicans actually lose twenty pounds in front of the camera. These twenty pounds physically disappear from their bodies and if the person is skinny enough they will lose a limb or organs.

Colombians are notoriously bad at dice-rolling when playing "Dungeons and Dragons" and are prone to having temper tantrums when they fail a saving throw.

Panamanians are the world's hairiest people…on the inside.

Argentineans eat three times their body weight every day and sleep in caves through the winter.

You can tell how old a Mexican man is by the number of fingers he has on his left hand. Each finger is equal to one month.

The average life span of a Mexican man is five months. A few have been known to live six or seven months.

Brazilians are the world's happiest people. This is because they are imaginary.

Puerto Ricans make very bad sailors because of a longstanding rivalry with the cuttlefish.

Cubans are capable of spraying concentrated acid from glands in their sinuses. They are otherwise completely normal so if they do spray acid their faces usually melt off.

According to the Bible Peruvians sold their souls to become the race of people most adept at performing the break dancing maneuver known as "the robot".

When a Puerto Rican dies a small ape-like creature called a "Muerto Rican" bursts from their chest and scrambles under a rock where it deposits a fresh clutch of eggs. These eggs will hatch and mature into a Puerto Rican.

Hotel Accommodations Provided by the Hilton of Lansing (Colombians) 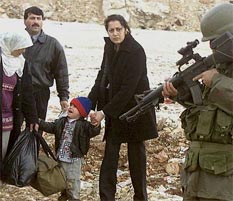 Look at all those evil Arabs.Current Status: Stereotypes for Arab Americans used to be relatively mild. The West associated things like belly dancing, harems, and turbans with them, which doesn't give racists a whole ton of fodder to work with. Recently several Arabs were involved in making a lot of Americans, probably including dozens of Arab Americans, explode in New York and Washington. This created the mould into which racists poured all other Arab Americans. They are crazed terrorists, Kalashnikov wielding nut jobs with beards and, yes, turbans. Hijackers and throat-slitters who will break into your house and run your babies through with a saber where they sleep in their cribs. Up until 2001 it had been a gradual shift for Arab American stereotypes, from Egypt and the Pyramids and 1001 Arabian Nights to Taxi cabs and donut shops and the occasional suicide bomber in Israel. But September eleventh was like a godsend for racists throughout the United States. They found their voice, and could shout from the highest peak about how every filthy sand-nigger and camel jockey is nothing but a murderous demon. It's time to rob the racists of their voice.

Mavis may teach some fantastic typing, but all Egyptians have a sworn oath to murder her on sight for a mysterious injustice dating back to the eighth century, B.C.

Saudi Arabians are filled with nougat.

Iranians are terrified of koala bears and have a day each month where people across the country congregate to spit on pictures of them. Sometimes the elderly and young children are so afraid of the images of the koala bears that they collapse. The reason for this is unknown.

Afghanis require a nitrogen rich atmosphere. Their cities are domed and pressurized and when outside they must ingest a nitrogen capsule every hour or die from asphyxiation.

Jordanians can't use the Internet. They tried, they just can't do it.

Palestinians cannot turn while moving and must stop, rotate, and then continue forward. The one exception to this is if they are traveling faster than light.

My Two Dads (A group of Egyptian men) 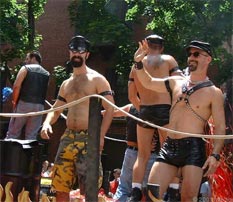 Gay pride parades: reinforcing homophobic stereotypes since the late eighties.Current Status: While not exactly racial groups, both homosexuals and Jewish people receive at least as much derision and stereotyping as their ethnic brothers and sisters. From cruel pogroms against the Jewish people to playful rites of passage like tying a homosexual to a fence and beating him to death, both groups endure their share of not-so-light-hearted ribbing. You would think with the high number of existing baseless stereotypes like Jews drinking the blood of Christians and homosexuals being punished for sin with HIV that there would be little room left for more nonsensical stereotypes. Think again! People will forget all about AIDS and eating babies after they hear about what's "really" going on with those gays and Jews!

Most gay men are unable to navigate stairs and have great difficulty with ramps or ladders.

When a lesbian sleeps her dreams physically manifest nearby. Most lesbians dream of murdering heterosexuals and burning their cities to the ground.

Lesbians can emit a high-frequency sound that, while inaudible to humans, is painful to insects and dogs.

If a Jewish person tries to knit anything other than mittens they will be cursed with brain lesions and die within six months.

Yom Kippur is Hebrew for "Eating the Marrow of Gentiles".

If you see a gay man with a handkerchief in his back pocket that means he is mourning because his pet duck died in a jet accident.

The Elders of Zion are the last boss if you try to overthrow the New World Order. They look like giant eyeballs and you can only hurt them right before they shoot a stream of glowing spheres out of their pupils. Regular Jews inherited the physical trait called "eyes" from the Elders of Zion.

Being gay is caused by looking at the aurora borealis or "Northern Lights". You can look at pictures of it or look in a mirror to view it but if you look directly at it then congratulations, you're now gay.

If you ask her to a lesbian will burn you a video CD of the moment of your death.

Gay men can fly at will and even hover in place above the ground, but they choose not to.

Jewish women secrete nicotine from their mammary glands and are the sole source of nicotine additives in cigarettes.

Amazingly enough I was lying about all that hate mail. Other than PJ Forrence sending me a scathing e-mail about my incorrect usage of clichés I received a total of zero hate mails. I consider this almost as shocking as the fact that no one laced into me about hating Unreal 2. I guess people who aren't racist, even if they are easily offended, are generally ten times smarter than people who loved Unreal 2.