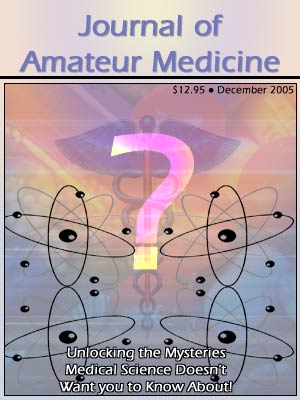 Ever since taking a lucrative job selling magazines door-to-door, I've become something of a magazine master. My job as deliveryman for the magazine stars has made me a veritable conduit of information, and I'd like to exercise my conductivity with you today by exploring what's around the corner of the newsstands for one of my favorite magazines! Recently, I used the Internet to diagnose myself with several diseases, the worst of which made me long for the sweet embrace of a hysterectomy. The Journal of Amateur Medicine gave me the info I needed to save money on "healthcare professionals," cutting away years of medical taboos and making me the only doctor I need. I've come to know my internal organs as everyone should: up close and personal.

The Journal of Amateur Medicine is a prestigious quarterly medial journal by medical enthusiasts lacking proper medical degrees or boasting phony ones obtained from unaccredited mail-order Internet universities, which, by 2008, will overtake brick and mortar unaccredited mail order universities. We must not forget that in order to obtain legitimate medical credentials, one must dedicate his or her life to study, practice, and constant education. This option is not available for everyone, in particular those with learning disabilities such as Attention Deficit Disorder or a simple need for instant gratification. We should not be so naive as to exclude such people on the basis that they have not dedicated absurd amounts of time to fulfilling the demands of an unfair and manmade system.

Let's take a look at what's in store in the next issue!

Cover Story: A Cure for Indian Burns in our lifetime?

Leading medical scientist Dr. Professor Mark D'abobo investigates the growing danger of Indian burns to our youth. Journal readers will no doubt remember Dr. Professor D'abobo as the lead scientist working on the flatulence vaccine. In researching the nature of Indian burns, Dr. Professor Mark was told there was no cure because humans caused the affliction through rascally behavior. He did not take this for an answer, and set out to create a vaccine that would immunize people from ever getting Indian burns. What he ended up creating was a creamy blue liquid that caused people to spontaneously eject their small intestine, which was not what he intended. He was also sued when several test subjects claimed he misled them into taking the vaccine under the guise of a "blind taste test." D'abobo said he did not mislead anyone, stating that he did have people take both the vaccine and a small glass of Pepsi, and everyone correctly identified which was Pepsi.

Undaunted, he started from scratch, this time addressing the root cause of Indian burns: humans. If Dr. Professor D'abobo could chemically disable the part of the brain that triggers people to perform Indian burns, he could effectively wipe this vicious epidemic from the face of the Earth. Unfortunately, he is still years from understanding exactly which part of the brain is responsible for this knowledge. 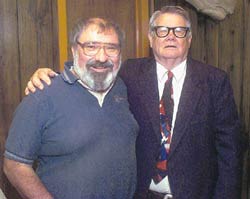 With Dr. Professor D'abobo's tireless work, mankind might one day wake up to a world without Indian burns. For now, D'abobo believes, "prevention is the best medicine. It's really all we have right now."

How does someone prevent something that's part of human nature? "I've invented arm braces that protect your must vulnerable areas – your arms – from Indian burns. With these on, nobody will be able to twist your skin in unnatural ways. Nobody."

Dr. Professor D'abobo's arm braces, made from pure nickel, are a comfortable fit, though they do prevent all forms of arm movement. They can be purchased from his website – www.number1medicalscience2.net/purenickelimmortalitygauntlets/ – for $399.99 plus shipping and handling.

For the full story, be sure to pick up the December issue on newstands in late April!

Plus: a pill that makes it feel like "Law & Order" is on all the time in your head? It's finally here!

The Journal of Amateur Medicine stays on the pulse of the world's most deadly viruses up until there is no pulse left. Here's a sneak peak at their rundown of the latest pandemics sweeping the nation!

While the bigwigs throughout the world run around screaming like a chicken with its head cut off over the danger posed by avian flu, they are ultimately ignoring the real danger: avian flu's little brother, avian runny nose. Recent reports show that avian runny nose has mutated, and can now be contracted by humans. The result is a chronic runny nose that lasts until it is treated, often with a standard issue box of tissue paper. The Journal of Amateur Medicine ranks avian runny nose as one of the greatest threats to humans out there, since many do not even know they are infected.

Transmitted instantaneously through physical contact with infected party. Parasite instantly departs its current host body for the new one. Disease transmission is often nullified when potential hosts are in "safe spots." Side effects include ridicule, scorn, and exclusion from peers.

Scientists are calling this a genuine Biblical pestilence that's spreading like wildfire. The Journal of Amateur Medicine thinks the officials are over hyping this one. If you are bleeding out of every orifice and are diagnosed with this strain, stick it to mainstream medical science by toughing it out and ignoring their silly quarantines. This one's going to go the way of the dodo.

Hundreds of tips on how to beat paying medical bills or cheat your diseases await in the pages of every edition of the Journal of Amateur Medicine. Not since the novelization of "Star Trek 7" has their been such an extensive tome of knowledge!

Sneak past your diabetes by hiding the sugar you eat inside layers of non-sugary snacks.

Most rashes can be effectively treated with boiling water.

Resurrecting Grandpa? Impossible you say? Stuff 18 live squirrels in his corpse and tell us that to our faces.

Everyone says exercise is great for health, but our studies show it can lead to fatigue and injury. We recommend you take it easy until more research is conducted on this controversial issue.

Cure most blood and circulation problems by running copper wire through your veins, removing clogs and stretching them out for increased flow.

Most terminal diseases can actually be cured through prolonged exposure to white noise and a strict diet of molasses.

Laser eye surgery is as popular as ever, and we've got a handy guide on how to do it from home, plus a bonus guide to making your own cool holograms.

If you found this information helpful and would like to buy a subscription, I'm your go to guy. I'm trying to save up money to get my common law wife's cat some elective surgeries (we want to replace its back legs with wheels and also add pouches to its skin so we can store TV remotes and such in it). It's the perfect holiday gift, and your help would be appreciated.