I don't want to get your hopes up any higher than they already are, so I'll address this right off the bat - no, this is not your chance to finally hook up with one of the incredibly talented and virile Something Awful readers, nor is it your chance to hook up with Josh. Sorry if today's title misled you in any way, shape, or form. Instead, today's article is going to take the form as a service to some of our most loyal readers. A while back, I wrote an article that was basically one big advertisement for how incredibly datable I am. The article was a huge success, and now wherever I go, I am accompanied by a bevy of beauties. Well, not quite a bevy. I think we'd need one or two more girls for a complete bevy. But a bevy, give or take a couple, is still pretty darn impressive, if I do say so myself. And for the record, I do. When the word got out about just how powerful using Something Awful as a personal ad can be, my inbox was immediately flooded with requests from lonely readers who are desperately in search of a little companionship. While I did take the time and effort to inform each and every one of them that while I am a writer for a website, and thus unbearably sexy, they are simply website fanboys, and thus massively repulsive to the opposite sex, a number of desperate readers wrote to me yet again, begging me to use my incredible literary prowess to find them dates. Now, I like to put up a tough front, but deep down I'm a caring and generous guy. I just couldn't ignore their pleas. So, I did what I always do when a reader's request finds its way into my heart of hearts - I filed the idea away until the time came when I was bored enough to do something about it. Well, that time has come. So now I am oh so very pleased to present to you the Something Awful Dream Dates - free personal ads for a cross section of this site's most dedicated and most eligible bachelors! 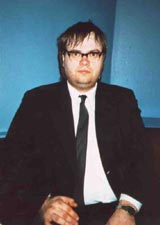 Look, he got dressed up for you! Not pictured: his drippings.

For the woman who appreciates ever single part of her man, from his sweaty, oily skin to his most stink-producingest glands, there is no better catch than experienced bachelor Gavin Tarklehoff. A self-proclaimed physics "whiz," Gavin has spent every single Friday night for the past year working on his theory of why the Warp Drive from Star Trek would never work in real life. Now that's the kind of dedication that can make a relationship last a lifetime! A big self-improvement buff, Gavin recently switched his daily soda intake from three liters of Pepsi to three liters of Diet Pepsi and is currently in serious contemplation about abandoning M&M's altogether in favor of Peanut M&M's. This is a man who is no stranger to compromise! Oozing charm and various other fluids, Gavin is the webmaster of www.kirknet.com and enjoys polishing the plastic cases of his unopened "Star Wars" collectibles.

Gavin Tarklehoff's Ideal Match: "I'm looking for a leggy blonde with a great physique. Must be in top physical condition. I don't want to be seen with anyone who doesn't know how to take care of her body! Must approve of - or at the very least, not mind acne, backne, chacne, and knacne."

In Gavin Tarklehoff's Own Words: "The ideal date for me would begin when you pick me up from my parent's house. We'd go to the Bickford's on Pine, where they all know me, so I could show you off. We'd spend hours discussing whether Babylon 5 or Farscape is the best show on the Sci-Fi Network right now. Careful, though! I don't mind telling you I'm a Babylon 5 nut and I can argue its superiority all day long! Then we'd go down to Aladdin's Castle in the mall for a Dance Dance Revolution tournament. I'd let you win, just for being so cute, but that doesn't mean I wouldn't expect a little something in return later on, if you catch my drift! If you're interested, you can reach me at gofrodogo@hotmail.com." 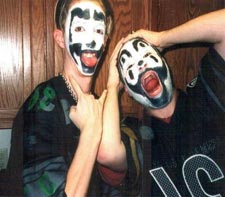 I don't know which one is him, and I don't care. Not pictured: intelligent life.

With his six-foot wide Jnco jeans and stylish ski cap over his blonde dreadlocks all year long, Brian is not only the height of fashion, but the height of the social ladder! A master conversationalist, Brian, or "Killa B," as he likes to be called, can find a way to relate to just about anybody, regardless of race, creed, or color. You'll be amazed how your social life just explodes when you get to spend to time with this energetic young man who has somehow managed to unite black culture and white culture in one scrawny, pimply little body! Whether bustin' a phizzat rhyme to the latest beats or enjoying some of his mother's scrumptious pot roast at their home in the suburbs, Brian is miraculously able to bound from one extreme to the other! A lover of all forms of performance, Brian's favorite band, Insane Clown Posse, brings together the finest elements of white rap with the joy and exuberence of Barnum and Bailey's circus. Currently employed at Denny's. Brian hopes to become either a hip hop sensation or an investment banker.

Brian Dunbar's Ideal Match: "Yo, I be looking for a fly honey who doesn't front and won't get all up in ma grill whenever I try to get my freak on! Cuz I gots to be real, and I ain't about to fuckin play for no shorty, yo. And no mothafackin juggahos, word! Also, it would be swell if she got along with my mother and my sister, Muffy."

In Brian Dunbar's Own Words: "Wazzup, bizzotches??? This is da ill nasty juggalo master, mothafacko! Yo youze allz gotz to fuckin give it up, becuz Killa B's in the mothafackin hizzy!! Yo, me an my bros jus lookin for sum poonani an we don't care who it be from yo! Just as long as she don't go touchin my chainz yo!!! Peece out mothafackos!!@ 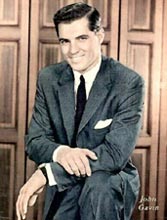 Grab an oxygen tank, ladies, because this hunk of man is about to take your breath away! Modern day Don Juan Dirk Woodrow is the strong, sensitive, and most of all one hundred percent real man that can make any woman's dream come true, just so long as that woman isn't a crazy dyke! At twenty-eight years of age, Dirk is old enough to buy alcohol and porn, which a fourteen year old boy certainly can't do. Other distinctions that separate Dirk from a fourteen year old boy include his genuine driver's license, his middle school and high school diplomas, his five Ph.D.'s from the Harvard School of Excellentness. He is a professional millionaire and secret agent, as well as a professional baseball player. Dirk enjoys long, moonlit walks along the beach, candlelit dinners, evenings at the theater, holding your purse while you try on shoes, and playing Counterstrike. I mean, investing in the stock market.

Dirk Woodrow's Ideal Match: "Any woman is the right one for me, because every single woman is a beautiful and sultry creature who deserves to be treated like the princess she is. No fatties, tho, am I rite?"

In Dirk Woodrow's Own Words: "Hay women! It is me, Dirk Woodrow, the most romantic guy in the whole wide world! Women love me so much b/c I am a really really cool guy and give them lots of awesome sex. Let me give you some sweet sex, baby. I'll rock your world! I'm fucking awesome, and any 1 who doesn't think so is a stupid fag! Like when I was telling Bobby Stupenski how I was going to get a personal ad put online, and he was all like "No one would want to go out with you, Tyler." And then Mrs. Henson told us to be quiet. That stupid bitch. She doesn't know what it's like to be twenty-eight, like I am. I have a lot of money too." 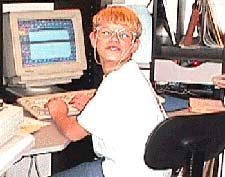 What's that loveable scamp up to now? Not pictured: the jars he uses as a toilet.

Let's face it, ladies, the most important thing to know when you're getting into a long term relationship is whether your partner can provide a safe future. Well there's no safer future than computers, and Steven "Gigatronic1411809" Dardinov knows computers better than Bill Gates and Steve Jobs combined! Or at least, that's what his website claims. Gigatronic1411809 is fluent in all sorts of computer lingo, and he was once voted the most valuable player of the match by the Unreal Tournament Clan Wolfclaw two games in a row! He'll hack his way right into your heart, just like he once hacked into some dude's computer and changed all of the BMP files to JPEGs and all of the JPEGs to BMPs, even though everyone knows that the PNG format is really the way to go! Can you believe it? That's not the sort of talent you can find in just any chatroom! Steven works the morning shift at Best Buy and enjoys creating pop up ads to advertise pop up ad blockers that don't work. 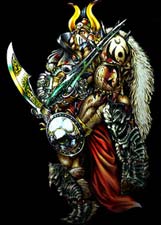 How can you say no to that face? Not pictured: the mutilated corpses of all those who stood against him at the Fortress of Entranadador.

If you like muscles, you can't do any better than this slab of Grade A stud! He comes out of the East like a deadly hurricane, leveling all foes who dare stand against him with neither mercy nor pity. From Carpathia to the lost city of Dul'nargoth, a legend spreads of the Slayer, ravager of kingdoms, pillager of churches, destroyer of countrysides, . Peasants flee at the mention of his name. Armies tremble at the sight of his mighty broadsword, its massive blade stained with the blood of a thousand men, its hilt topped by the gleaming skull of his first and most dangerous opponent - his own father, Othgard the Unrepentant. Ulthgarr's wide-reaching wave of terror has toppled kings and left countless dead in the streets and in the fields of a hundred battlegrounds. While no one alive knows his true purpose, one fact is absolutely certain - there can be no stopping him. Today's modern weapons mean nothing to the Slayer, a creature more monster than man, who has survived for centuries, fueled by his unholy rage and the blood of the mortal men who stood against him. He shrugs off bullets like so many snowflakes, whilst his fearsome blade cleaves his enemies in twain. There are none who can stand against him. In his free time, Ulthgarr the Slayer enjoys coaching youth soccer.

By now all of you female SA readers must be quivering under your bodices, or whatever it is I'm fantasizing about you wearing. And who could blame you? Five specimens of masculinity, all just waiting for you to contact them. I certainly wish all of these gentlemen the success that I had, but I'd also like to warn them that I've already snatched up a good percentage of the available tail, so good luck. If you'd like me to make broad, insulting assumptions about your personality and ridicule you extensively based upon the way you write your emails, drop me a line and tell me a little about yourself. Who knows? Maybe this is the kind of exposure you need to meet the person of your dreams! In all honesty, probably not, but maybe!