Life Lessons: The Needy and the Greedy

Greetings, dear Internet reader. I am happy to announce a new feature for your Saturday reading enjoyment. It's a little something I like to call "Life Lessons", and is geared to be a heart smart helper for the youth of cyberspace, teaching them about life, love, and maybe themselves. I feel that services like this are necessary because parents and teachers are failing at their jobs, and our kids are as dumb as rocks. While the parents are away at sports bars drinking up their kids' college funds, these children are playing Monopoly with their nihilist babysitter, learning to become greedy little bastards by charging a little metal boot extravagant hotel fees. I know you are thinking "Hey Frolixo, this is a comedy website, not a personal arena to spew your convoluted ideas about what's wrong with society and the world. You fucking suck!" This is true, although I think it's in our best interest to sacrifice a few chuckles and snorts for something much more important. I forgot what it is, but I'm sure I'll remember by the end of this article.

Today's Life Lesson is about the green-eyed monster called greed. Often thought of as the root of all the world's problems, the hoarding of money and materials often spark fierce competition that usually ends up causing strife and bloodshed. Wars and conflict have been waged over the craving for natural resources like gold and oil. Such is the case when I played Civilization III as the Indians and the Mongols savagely attacked me to get ahold of my precious gems. The thought of all the electronic babies that died in those razed cities over a handful of gems brought me to tears. Why must there be so much violence over wealth, and why do I always get a shitty starting location in the jungle or tundra. There are no easy answers.

On a personal level, the hoarding of material goods can be detrimental not only to one's mental state, but also regarding relationships with other people. Take Greasnin (please). He spends almost all his time and money hoarding Bea Arthur collectibles, reducing his once capable mind to oatmeal, and totally freaking out any girl that is drunk enough to follow him back to his dorm room. Meanwhile, kids with swollen bellies in Africa are eating low grade dirt out of the skulls of their siblings while random mortar rounds fired from the local warlord bombard their huts. Just one limited edition Bea Arthur action figure would be enough to feed 100 children high grade dirt out of proper bowls for 2 weeks. People like Greasnin are killing the children of Africa. 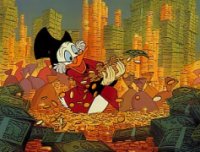 All throughout history, greed has been the bane of mankind. The first form of currency was created by the cavemen who used dinosaur testicles, until one really greedy caveman strived to be the richest and collected as many dinosaur testicles as he could until they went extinct. It's that sort of thinking that causes all the problems in the world, and if you look around you, we haven't really changed that much. Nowhere is this attitude more prevalent than in America, a land whose foundation is built on greed and treachery. The recent scandals of Worldcom and Enron are examples of a few greedy bastards ruining it for everybody. Thanks to them, newly retired folks with decimated 401Ks are now turning tricks on the streets to pay the rent, and young investors such as myself are putting our money towards magical beans and Nigerian officials rather than dumping thousands of dollars into the coffers of these bloated fat cats.

The most classic case of greed gone rampant is Black Monday, 1929. In the 20's, everybody was investing in the stock market, and everybody was making a lot of money. Folks got more and more greedy, throwing their life savings and retirement money into the market. People became overwhelmed at the prospect of making millions, and lost control. When the fateful Black Monday was over, most of the investors were wiped out, and banks closed. This takes us to the visual part of today's Life Lesson. It's a little comic about the stock market crash of 1929, and is designed for mildly retarded children and people who think all this text is too long, so they didn't read it. Enjoy!

So what lesson did we learn from this comic? That's right, greed is just not cool you guys. Our protagonist wants dearly to save his mother yet has no money for the expensive medicine of the era. He is forced to beg for coins in cold, dirty streets of the city. The fancy rich man, clearly a man motivated by money, cannot even spare one copper for the poor lad, and is on his way to an important meeting. After his mother's untimely death at the hands of an invisible killer, influenza, our hero decides to invent a medicine to help all those dying mothers out there. After being awarded a million dollars for his invention, the young lad is now in one of the top tiers of society. Wisely, he decides not to put the money in the stock market and instead invests it in pig racing tracks (not shown). After the great stock market crash, all the rich gentleman were reduced to bums and hobos. The tables have turned, but unlike most people who own vast amounts of money, our hero remembers his lessons of life and spares a copper for the ailing man. The once rich man was now enlightened, and moves to Germany to start the Nazi Party, an organization focused on reducing the moneylenders and doctors in the country and uniting the Fatherland so that it may claim its rightful place as the greatest of nations, and rule the world with an iron fist (also not shown).

Now that we know of the perils and pitfalls of greed, and how we can take countermeasures against it by changing our own behavior, how can we change society? I don't want to seem like I'm getting a big head here and think this Life Lessons will change the face of the planet with its revolutionary ideas and a wealth of genius, but it has to start somewhere, it has to start sometime, what better place than here, what better time than now? I have a solution:

COMMUNISM!
I swear it works! We can rile the support of the Proletarian masses to burn the houses of their masters and paint the streets red with the blood of the Bourgeoisie swine that ride the working class to death for their own personal gain. We shall set up neo-Communist factions in each major city around the states, recruiting only the most fervent believers who will carry out orders without question. A major propaganda campaign with soften up the public for the cause before the military strikes are issued from the guerilla bases set up in the Andes and Rockies. Once Washington is captured, the current government will be disposed of and I shall be placed as the Supreme Overlord of the Red Empire. Churches and movie theatres will be destroyed, the Red Army will seize all private property, and hordes of gold and millions of dollars in hard currency will flow into our vast chambers so we can live like kings for the rest of our lives!!

So who's with me?

Hiya folks, Dennis "Corin Tucker's Stalker" Farrell reporting in once again. As State Og's Representative / editor / scantily-clad poolboy, I receive numerous questions from the public on a daily basis. Questions like, "What does the 'Og' mean anyway?", "Are you retarded?", and "No seriously, are you? Your mouth is always slightly open and you stare straight ahead alot." When these questions come up, I like to reply by flamboyantly faking a heart attack, even taking the time to stagger about and shout "I'm coming to join you Elizabeth! It's the big one!" It can get a little awkward when I have to do it several times in one conversation, but I'm able to muster my strength and press on. It's my little way of reaching out to the public and letting them know that I hate them.

Each State Og clone comes nude save for the protective airtight cellophane wrapping which, come to think of it, may account for the remarkably short shelf life of the product. However they arrive in pristine condition, ready to fulfill your every need; be it helping with the chores, performing deviant sexual acts, pretending to be your friend, or entertaining at children's parties. With their amazing flexibility they're useful in almost any task and are self-cleaning, like cats! Their speech patterns consist of a curious subdermal hum, not unlike whales or people who are about to explode due to massive instability in their genetic make-up; a soothing and constant sound that will lull you to sleep regardless of how tired you actually are.

That excerpt from this week's update lets you know how much I love you, so you should go read the rest. What's that you're asking? Why did I just say I love you even though I claimed to hate you just a few sentences earlier? Oh Jesus, my heart! It's suffering some sort of attack! Seriously.