Sorry everybody, but I just didn't have the time to put together an article for this week. I'd especially like to apologize to the other Something Awful writers, Risheick "Lowstolixo Editor" Kyarsoruffeiwicz. I've let you guys down. But I don't want you to think that I just blew off my work so I could go out and do drugs with hookers. I have a very good reason for not being able to write an article this week. Actually, it's sort of a long story. I'll start from the beginning, but remember, this is just an excuse for not having an update. I don't want anyone confusing this with an actual article, now. 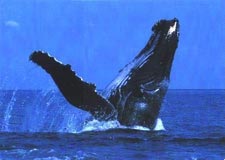 I was scuba diving off the coast of Zimbabwe a couple days ago on a fact-finding mission for ELEAWTA (that's Eating Lethal and Endangered Animals While They're Alive for those of you who don't keep track of the major humanitarian organizations). I was trying to determine once and for all whether or not whales are fair game. Yes, we all know that they're endangered, but the question is, are they dangerous to mankind? Could they win in a one-on-one fight against a human being? With their massive size advantage, the answer seems to be yes, of course they're dangerous, what kind of idiot are you to ask such a stupid question? However, as the president and founder of ELEAWTA, it is my duty to fully investigate the danger associated with any given animal before adding it to the approved list of creatures that group members should feel free to go out, beat up, and eat. In my opinion, the whales' size advantage is balanced out by mankind's ability to go to the beach and not die. I also contemplated the fact that whales are basically gigantic eating machines. That would seem to make them formidable adversaries, but then I saw that documentary "Finding Nemo." Apparently when whales eat something by accident, they carefully instruct it how to avoid digestion. That's not exactly what I would call fearsome behavior.

See that? Completely surrounded by land! I don't know what the hell I was thinking!

Obviously, the whales - giant, docile blobs of fat, or giant, docile blobs of death debate had to be settled. So there I was, searching for whales off the coast of Zimbabwe. A problem presented itself when I discovered that Zimbabwe is completely landlocked, and thus it is quite difficult to find an actual coast, let alone whales. I wanted to rebuke my guide, Nbalamate, for making me walk for hours through the Zimbabwean wilderness in search of a nonexistent coastline, but unfortunately that was when a group of armed rebels took us both hostage. As it turned out, the rebels were planning major coup, but they didn't;t want to just rush into that sort of thing without clocking up a few hours of experience, so they had decided to stage a practice coup by overthrowing the National Guide Service. Long story short, Nbalamate was mercilessly slaughtered and the rebels established a new, customer-friendly guide service with lots of informative film strips and a money back satisfaction guarantee. It was all very pleasant, with the exception of the arterial spray during the brutal killings, but it still didn't get me any closer to finding a whale worth fighting, killing, and grilling, and thus I was still completely out of material for my upcoming article (the one you would otherwise be reading right now).

Better than Visa, unless you need to buy something.

The rebels/tourguides didn't seem particularly intent on killing me, possibly because they were tired out from the almost unimaginable extent to which they killed Nbalamate. I tried to explain to them that I was an American internet journalist and I was getting hungry, so would they please direct me to the nearest horribly endangered species, but my captors didn't seem to understand. I gathered that they didn't speak any English. I tried speaking louder and slower, but much to my surprise that didn't help. I'll admit that the combination of hunger and general frustration with the relative lack of whales in my immediate vicinity had me on something of a short fuse. Perhaps if I had been in better spirits I could have tried talking even louder and slower and some sort of intelligent communication could have been reached, but I just didn't have the patience. So instead I just whipped out the one item in my possession that transcends all cultural and linguistic barriers. No, not my penis. I'm talking about my official ELEAWTA membership card. Festooned with the ELEAWTA logo (see image at right), there is no place in the world that this symbol is not recognized. Since it stands for all of the progress that my beloved and rapidly-expanding organization is making in the pursuit of chronicling the best ways to cook lethal and endangered animals before they vanish forever, you can just imagine my shock when the rebels starting hooting and gibbering and waving their primitive AK-47s in my face. 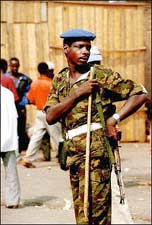 Now that is one saucy dissident.

There are over one hundred forty dialects in Zimbabwe, and I only understand a handful of them. And, for the record, not the popular handful So unfortunately I can't say I really understood why the rebels were getting so worked up. And just as a comparison of my good old-fashioned American civility to their open Zimbabwetian hostility, they didn't even try to speak louder or slower. Eventually, I was able to piece together enough of their gobbledygook and frantic gestures to figure out that the ELEAWTA logo is a dead ringer for one of their holy symbols. Considering that the ELEAWTA logo is just the Republican Party elephant colored black with a rudimentary bite mark erased out of it in MS-Paint, you have to admit that this was one heck of a coincidence. Then again, I should have figured that I'd do something blasphemous in front of the Zimbabweites sooner or later. Everything is holy to those losers. Since my membership card seemed to be the object of their ire, I did the most logical thing - I tore it up. Don't worry, I always carry a spare. In any case, this did not have the calming effect that I had hoped for. If anything, it angered the rebels even further. I came to the conclusion as the first of what would turn out to be many bullets hit me that it was distinctly possible that they were now planning to kill me, too.

Well, long story short, the scientists were able to preserve enough undamaged cells to clone me. Unfortunately, my clone was also dead and full of bullet holes, so that was a bust. Clone number two was alive and in relatively good health, but he was only seven inches tall. Clone three was just a computer simulation. Really, clones one through sixty-two were less than ideal. But clone sixty-three was more or less perfect. There were some modifications here and there (curious, ladies?), but I'll get into those in a minute. So I was cloned back into existence, which was a plus, but of course there was a catch. Poor, poor Greasy. I've been cloned so many times in my young life, and there's always been a catch. You know, there's a saying the field of cloning - when you're a clone, you're never really yourself. Ha ha! Get it? It works on a number of levels, but in my particular case it meant that I was brought back to life to serve as an unstoppable killing machine. And who exactly was I supposed to kill? Not the whales, I can tell you that much. You guessed it, my job was to kill the rebels. In all honesty, that sort of bummed me out. Aside from killing me, they hadn't been all that bad. Oh well, it wasn't like I had a choice in the matter anyway. The scientists told me that they had implanted a chip in my brain that would basically force me to do their bidding. Like they really needed to tell me that! It's not like this was the first time that I had been cloned from the remains of my own corpse in order to put down a rebellion. 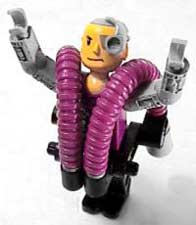 Yep, now I'm a cyborg. Just like this little fella.

With heightened strength and agility, as well as expertise with a smattering of melee and ranged weaponry, I was a one man fighting force suitable for a movie starring one, or possibly multiple members of the Van Peebles family. And so it was that I became an assassin for the Zimbabwenese government. Armed to the teeth and as ready to rock as a newly cloned, scrawny, bald ball of death can be, I made my way to the rebel stronghold, A.K.A. the Zimbabwe National Tourism Office, which was conveniently located about half a mile down the road from the Zimbabwe National Genetics Research and Armory facility. When I got there, the door was locked, but since it was one of those doors that's basically just a big aluminum-rimmed window with a handle, I could see the rebels sitting inside. I hadn't felt too strongly about them one way or the other before, but as I stood there watching them answer the phones and draw up the new eye-catching tourism brochure, I felt a hatred unlike any that had ever been beamed into my head via computer chip implant before. I don't know how long I stood frozen in that spot, just watching them, but evidently it was a little too long, because they saw me there and summarily shot the everloving shit out of me with surprisingly little regard for the structural integrity of their door.

Long story short, I just got out of traction and came to the terrible realization that not only did I not kill the rebels quite as much as the Zimbabwican government would have liked, but I still hadn't settled the whale debate. So, while my body may make a full recovery, my mind is darkened, damp, and kind of smelly with the knowledge that I may have single-handedly failed to prevent the infrastructure of an entire nation from crumbling, that those who long to feast upon blubber for the good of mankind will have to wait, and most of all, that I let down the faithful readers of Something Awful. So once again, I apologize. There will be no article today.