Under Seige 3: When Animals Attack

Not since the battle of Wake Island has man faced such adversity as I have at my own apartment this past year. When I moved to the heavily wooded outskirts of Metro Detroit to escape the crime, pollution, and white battle rappers, I thought that I could at last relax in my own residence, safe from random assaults and unwanted intrusions. Boy was I ever wrong. I would probably rank this mistake up there with asking Livestock out to the prom, only to get ditched for Zack "Kitten Lips" Parsons, and then getting pig's blood dropped on me when I got voted "most prettiest princess". The enemy is at the gates my friends, and they mean business.

This enemy I speak of are the venomous woodland creatures that live in the forest and streams in my backyard. It seems that they have banded together in an unholy alliance against a common foe: me. Through sabotage, subterfuge, and psychological warfare, they have led a successful campaign against my front, causing me great emotional trauma, lack of sleep, and whining about it over the Internet to everyone's general annoyance. Let me tell you about some of the things these bastardly beasts are doing to make me cry at night while eating a whole tub of vanilla ice cream by myself in the bathroom. 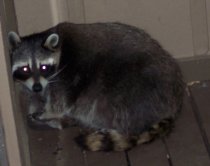 A racoon defends its hard won position on my balcony. Not pictured: me getting bitten in the kneecap.

Racoon City: The Battle for the Balcony
The main battleground in this constant and neverending war is the balcony. My balcony is right in the woods, with branches so close you can touch them. Since I'm on the third floor, it's the perfect level for most of the treetops where the vile little creatures plot their conspiracy. The bulk of this beastly battalion consists of very large raccoons that have taken up residence on my balcony, using it to nap, scream loudly for no reason, and as a personal bathroom. Yes, they shit everywhere. Not cute little nugget shit, but big ole dog sized shit that doesn't smell very pleasant in the least. Since these animals are nocturnal, they find my balcony very convenient for sleeping during the day. All day long they're huddled in the corner taking a nap. If I try to go outside with a chair to sit on my balcony to enjoy a nice summer day, the current racoon sleeping in the corner will wake up and growl menacingly, warning me to leave or get a face bite full of 29 various diseases. Since I'm a big wuss, and confrontations make me hyperventilate, I let the raccoons keep the balcony. For now.

Lewd Lovemaking Ducks
Just like the President of The United States, George Bush II, I like to get a good eight hours of sleep a night. Unfortunately, it's been more like 4 hours a night due to some randy ducks that practice their nightly orgies in the stream outside my window. When I was in 'Nam, I slept through Vietcong raids like a baby, but these duck's quacking of pleasure rouse me out of even the soundest sleep. These nightly Culigulan feather-filled fuckfests have gotten totally out of bounds of what I would call decent water fowl mating. I got so sick of it, that I went outside with a flashlight to break up the duck kingdom of Sodom and Gomorra. I dispersed the rabble amongst a whirl of feathers and duckish secretions, and went back to my bed to try to get some sleep, but they would return with renewed vigor. Since my sleep has now been cut in half, I've found it hard to concentrate at work, and cannot perform with a woman any longer. My girlfriend doesn't buy the duck excuse, but I know it must be the source of my intimacy problems. 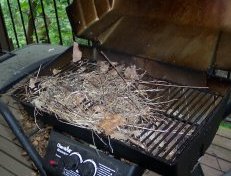 Bird Nest BBQ.
One of my favorite things to do in summer is cook juicy red meat and various wursts over an open flame. When I am tending the BBQ, I am the master of my domain. There is nothing more personal and holy than a man's grill. One day I saw a medium sized sparrow entering the closed BBQ from a vent hole on the side. Thinking it was mighty queer, I investigated as to why on earth this bird was going into my grill. When I opened the lid, a shrill womanly shriek of horror erupted out of me. There was a bird's nest in my BBQ! Littered with sticks, twigs, hay, and a healthy portion of crap, my once proud BBQ was defiled. Never before have I felt so violated, barring the time that I was molested by Gary Hart at the 1984 National Democratic Convention. I was so enraged that I let out erratic, hysterical laughter and laid down on my floor in catatonic despair until I felt the urge to put a Hot Pocket in the microwave.

Animal Dance Party USA
Everyday is a party at Frolixo's apartment! Since I'm on the top floor of the building, I hear every little footstep or acorn that taps on the roof. Apparently the roof is the most happenin' place in the animal kingdom, a hotspot where all animals can get together and dance the night away. Paws of all shapes and sizes randomly stomp and scramble across the roof at all hours of the night. I can only assume that raccoons, squirrls, and other assorted beasts are dropping E, juggling glowsticks, and jumping up and down repeatedly to test the stress capacity of the ceiling. I bet they keep playing Paul Oakenfield over and over again, who I hate and want to die in a fiery car crash. This is another reason I can't sleep.