When Pride Cometh, Then Cometh Shame 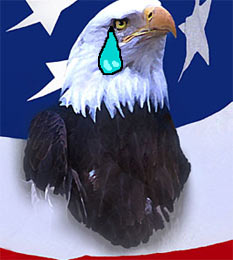 In memory of America's fallen heroes.It's that time of year once again for Americans like me to honor our country's independence by blowing our hands off with Black Cats, waving the flag back and forth while staggering drunkenly on our front lawn, and yelling "woooooooooooooo" whenever something bright appears in the sky. I caught myself cheering on the rising sun early this morning and, after a brief moment of embarrassment, I realized that the sun was just God's way of celebrating how completely awesome the United States is. After that I cheered the sun until my vision went dark and I had to put a washcloth over my face for an hour or so. I'm still seeing stars which means all I need to do now is stare at a couple of halogen tubes and I'll have a virtual American flag superimposed over whatever I see. If I could only bottle that kind of patriotism I would be able to sell it at Wal-Mart and become a very rich man.

I give my country a pretty hard time on Something Awful, maybe sometimes undeservedly, but I figure the US of A is a big boy and it can roll with the punches. Today is the Fourth of July though, no time for politics or editorializing on the headlines, this is the day we let it all hang loose in a fiery celebration of our nation's proud heritage. Every country has an Independence festival of one kind or another, although seeing as how I'm American I really don't care about any other countries less awesome than America so I have no idea what they do exactly. I'm sure Cuba celebrates Castro or Chez Guevara or one of those pinkos, and Germany probably has a festival for whenever they finally beat back the bog goblins. England has the Queen's birthday and Freedom has some holiday that I'm sure is extremely rude and gay in a celebration of their country's legacy. Heck, Iraq can celebrate their Independence from cruel dictator Saddam Hussein on whatever day President Bush decreed that all of the shooting going on in Iraq had somehow fundamentally changed from war to "guerilla action". Oh those kooky wars where we win and then people keep dying every day, really makes you think! Who the heck am I kidding, it's the Fourth of July, ain't no time for thinking in this neck of the woods!

Seeing as how this is the Fourth of July I would like to turn this update into a wonderful remembrance of American culture. What better way to kick things off than with the theme song of American patriotism? Lee Greenwood's beautiful and stirring song "Proud to Be An American" will likely be familiar to most fellow United Statesians, but I think just knowing the lyrics of the song isn't enough. Let's explore the deeper meaning of this tribute to our great country. 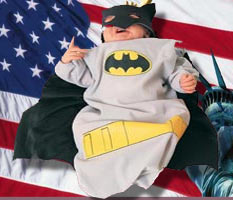 Patriotism CANNOT go too far. It's just not possible to have too much of such a good thing. If tomorrow all the things were gone,
I'd worked for all my life.
And I had to start again,
with just my children and my wife.

I'd thank my lucky stars,
to be livin here today.
'Cause the flag still stands for freedom,
and they can't take that away.

Some would argue that the flag doesn't really stand for freedom these days, but considering the types of fine specimens that blare this song from their trucks at all hours I don't think they would actually notice if the flag stood for smelting copper into commemorative statuary of Allah through their drowsy alcoholic stupor.

And I'm proud to be an American,
where at least I know I'm free.

It's a little known fact here in the United States but dozens of other countries are also considered "free". Greenwood is correct in his assumption that Americans are unique in knowing they are free since no other nation from England to Italy has a song like "Proud to Be An American" that gets played constantly almost year round.

And I wont forget the men who died,
who gave that right to me.

And I gladly stand up,
next to you and defend her still today.
'Cause there ain't no doubt I love this land,
God bless the USA.

Try standing up to defend her from an extinction level meteor.

From the lakes of Minnesota,
to the hills of Tennessee.
Across the plains of Texas,
From sea to shining sea.

From the ice encrusted Bering Sea to the clear waters of the Caribbean!

From Detroit down to Houston,
and New York to L.A.
Well there's pride in every American heart,
and its time we stand and say.

"When pride cometh, then cometh shame: but with the lowly is wisdom." - Proverbs - 11, The Pinko Commie Bible

But hey, Mr. Greenwood, all in fun, right?

After that it pretty much keeps repeating so I won't continue sniping at poor Mr. Greenwood since he is unable to defend himself here. Let's continue on with the festivities and pour out a forty for our dead homies in the first constitutional congress!

In addition to gathering around and getting drunk and blowing up fireworks that come in a variety of bright American colors I intend to celebrate the birth of this great nation in my very own personal way. Normally when I say something like that I'm being sarcastic and just intend to sprawl on the couch playing Sexy Volleyball in my boxers while trying not to black out from heat exhaustion, but this time I genuinely mean it! My Fourth of July is going to rock the house here at Casa De Parsons and if you're interested in celebrating like we intend to then please allow me to offer you some tips on being a diehard patriot. 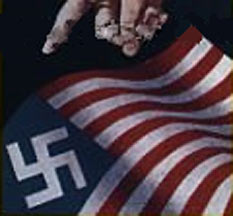 Oh SNAP! The Black Fuehrer of Harlem will not be pleased.

Cover everything in tiny American Flags. Stickers, actual flags, magnets, spray-paint stencils, tattoos that you cut out of those hitch hikers you keep murdering, and photographs of flags all work equally well. The "dime check" is a good way to ensure that you have adequately covered your home in American Flags. Just take a dime and throw it as hard as you can, when it stops bouncing around if it isn't touching an American Flag then shame on you.

Consume at least a twelve pack of beer by yourself. It can be any kind of domestic beer but people will think you're a liberal fag if it's a microbrew or a commie union scumbag if you're chugging Old Style. Guinness has recently been added to the list of acceptable patriotic beers even though it isn't domestic and Sam Adams has been removed because the guy on the bottle looks like he might be a homo.

"Born in the USA" is an acceptably patriotic song for the Fourth of July and don't let any Springsteen fan or snooty party crasher tell you otherwise. Try creating a mix CD using this, "Proud to Be An American" and various bootleg National Anthem renditions you recorded at sporting events. Stand up and take off your hat during every song.

Fireworks can be a lot of fun but be sure to be very careful when you're pouring gasoline on them to "pep things up". Fireworks may shoot out of the pile of bottle rockets unpredictably so warn any children near you by screaming "this is gonna RULE!"

Mobs of people shooting assault rifles into the air aren't just for Middle Eastern countries anymore! Grab a few good buddies and run through the streets ululating and firing a carbine skyward. Angle your weapon so that it probably won't hit any bystanders.

God gets downright pissed off when someone burns an American flag, but he's got no problem with burning a heathen flag so get a grab bag of flags from shitty countries and set them ablaze. Yeah, suck on that Burkina Faso! You won't be fucking with America anytime soon Lichtenstein!

Hot dogs and burgers are great fare for a Fourth of July party, but think of the possibilities when you combine those two fantastic tastes into a single super sized serving. Fill a sack with 20 hot dogs and then add five pounds of ground beef. Break three eggs into the sack, season to your taste, and then beat at least one illegal immigrant unconscious with the sack before sending him back across the border with a blast of rock salt. Upend the sack onto a hot grill and flatten until it covers the entire grilling surface. Slice like pizza and serve with a side of fried chicken.

If you have to drive anywhere honk your horn and don't stop until the clock ticks over to midnight. Hell, don't let that stop you! Who says we can't honor our nation's independence by honking incessantly for the next week or two?!

Sex is scary and bad, but violence is great and wholesome, so don your armor of God and march on down to the nearest immigrant-run business to reap a harvest of blood. Chanting "U-S-A" while you eviscerate the Pakistani woman at Dunkin' Donuts is your birthright as an American citizen, particularly if you are an American citizen of Indian descent.

You are a cow-like consumer with fingers singed by low grade explosives. Sweat stains ring your armpits and trace the outline of your protruding beef-stuffed gut that strains like a hatching reptile beneath the confines of the NASCAR t-shirt you bought at Wal-Mart. You work 50 hour weeks without overtime pay, your right arm has been broken twice below the elbow by compressors falling off the line, and your common law wife is probably giving blowjobs to the plumber when you're out of the house. Don't let it ruin your Fourth of July that you just got your walking papers, you've got two cold cases of Miller Lite and a brick of bottle rockets. Just kick back and let God bless this mess we call America. Good times.

Greetings and Marry July 4th, eFriends and eEnemies! Josh "Lyestacks" Boruff here to interrupt another horrible assault on glorious America by Zack Parsons! I had a fantastic day today, made only richer by children lighting off those damn "Witch Whistles" every five minutes as well as the bass heavy throb of distant bottle rockets meeting their doom. Yes, fireworks make everything better. In a weird coincidence straight out of science fiction, my talk of fireworks segues directly into my talk of this week's Phriday theme, which is none other than fireworks! Cripes, you'd think I planned these things. The SA Forum Goons did a bang up job making crappy fireworks packaging, so enjoy the exploding fruits of their labor! As an special Independence Day bonus, there's a crapload of awful images I dug out of my inbox plastered at the end.