About me:
14. Male. Whovian. Hetronormatively disassociative. Biromantically asexual. Incorrigable pleasurefiend. Lives in a gigantic model train [NOT a regular sized normal train]. Started reading homestuck at the age of 11 and all the sarcasm and cynical crap gave me cerebral palsy [disease from breaking bad] Now all my shirts are from Hot Topic and I can only sleep on the floor next to a bed. ADventure time 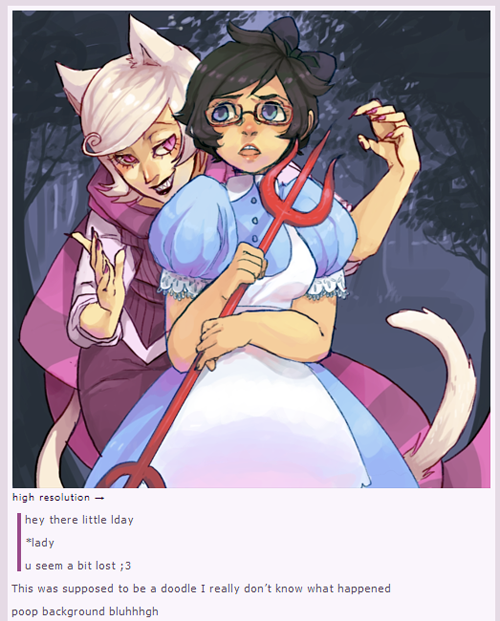 AOMAGOMGNgkdnnklnsfd. That was such a freaking epic image I started mashing my keyboard while holding shift [carefully, so I only hit the letter keys] and then I stopped holding shift while still mashing the keyboard, and then I stopped and pressed the period key. Seriously though, this picture really captures the artistic value inherent in a purple vampire who's part cat playing an invisible accordion in front of some confused gender haver with a pointed stick. *sighs dreamily* This fandom so talended... 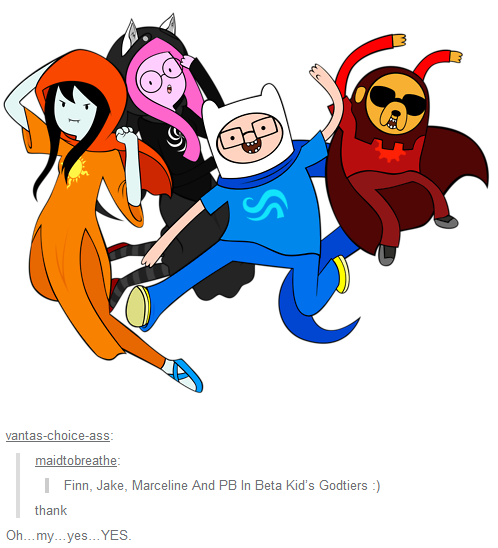 I cried IRL for 25 seconds after seeing this image... god damn. It's an indeterminately equal mixture of the children's cartoon adults watch and the adult's comic children read. The cool thing [uh... ONE of the cool things] about this image is that it's two things I already like, so I don't even need to look at the image. You could just show me a piece of paper with the media properties in the image, and I could imagine it, and I could type my fake excited elipses much more efficiently, which frees up a lot of time for tracing over REaction style gif images of Pokemon to be Dr Who characters.

Beautiful!!! I love it!! People care about you...I'm glad of homestuck inventing that concept so me and my foul ilk don't instantly kill ourselves due to uhhh [wikipedias 'smart shit to make girls like you'] the bad alienation of our modern society lmao. I just swallowed 15 grams of cigarette ash on purpose. 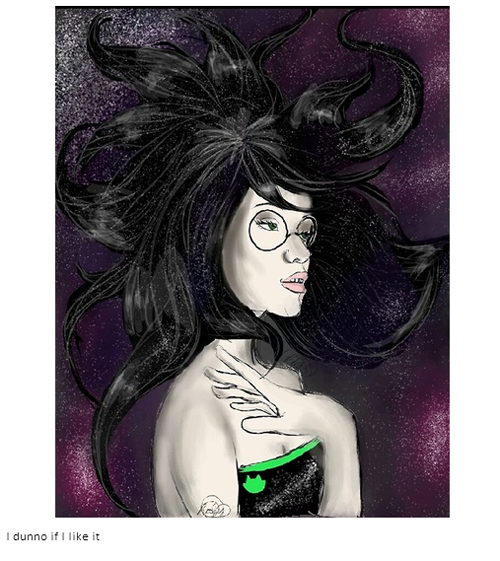 
I don't even... o_o it's so cool... it looks like she's in space in a nebula or a densely packed starfield or some dandruff and a blur filter. I particularly like the way that her vulnerability is represented by breaking both her shoulders and stamping on her wrist until her hand melts into her clavicle. I also like her fucked up face. 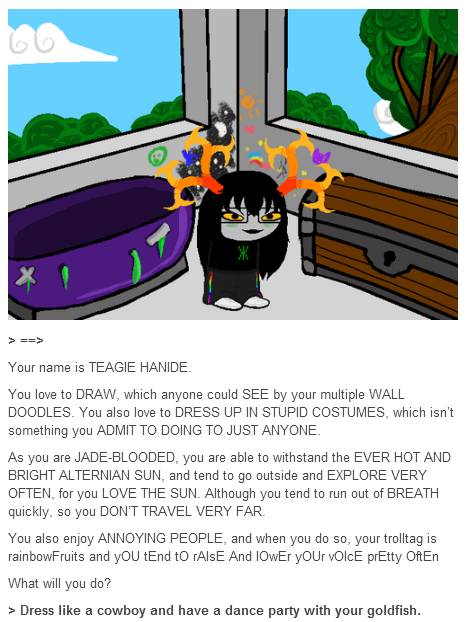 I read the homestuck comic, I read all the updates, I read the whole thing multiple times and I love it. However I love to read it more than once in a different art style, where the characters get copy pasted and edited slightly like it's a pokémon romhack, and the writing is mad libs but randomer and more ftw. Basically whatever this is is my shit, so, uh, yeah. reblog. "Teagie Hanide."


It is also cool that a fellow tumblr user made a fake fan character in the web comic that likes to look out windows and runs out of breath very fast and considers themselves "annoying" but in an enjoyable way, because it's good to know what it's like to be dead. 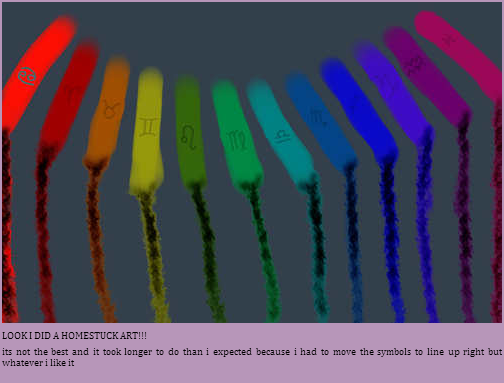 This combines two of my favorite things: 1) homestuck and 2) proper menstrual precautions. Reblogging for a signal boost, or some other messed up crap. I don't even know what it is, I'm scared and alone and all I have to define myself by is something someone else made, every aspect of my life is warped around it. just swallowed 10 more grams of cigarette ash and I liked it. I'm a freaky weirdo. Woof! Woof! I'm one sick little puppy.