In my twenty-odd years on this earth I've been called a lot of things. "Athlete" is not one of them, mostly because the most demanding physical activity I find myself in involves running to the fridge to get a ham sandwich before commercials are over. "Good Parent" is another one, seeing as most women view me as more of a giant ball of hair and curse words than as a possible parent.

Physical flaws aside, however, I pride myself on being a pretty bright guy. In fact, if some poor woman does decide to bear my young, I guarantee you here and now I will be a millionaire by the time I'm 45. Using a system perfected by Tiger Woods' father, not to mention every professional tennis coach ever, my kid will be a superstar athlete before he gets his driver's license.

Since genetics also deprived me of a working knowledge of most sports (around the turn of last century it was replaced with a lust for drinking and drinking while doing other things), I have decided to make a list of options and pick which works best for the kid. 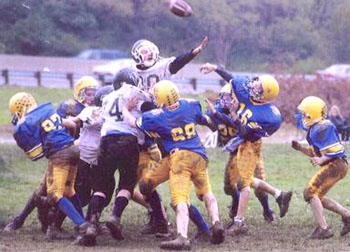 If I was doing the training, he wouldn't need to be holding the ball to get an ass-kicking.Football is, of course, the hardest American sport to understand and with good reason. The game has hardly changed since it was conceived by a group of men with gigantic hands and nothing to cheer at in the 1800’s. Even most of the terminology has stayed the same.

Since I don’t have the time, patience, or attention span to learn the many intricacies of what I’m sure is a wonderful sport played by hormone testing accidents and serial rapists, I will train my child to be one of the two positions I understand, quarterback or wide receiver.

Of course, there are also a number of defensive positions within the game that I do not understand. To train him for all of them, I will simply be sure to hold a football in clear view every time I beat him. This will teach him a natural hatred for all persons holding a football, and, in time, make him into a powerhouse defensive player. 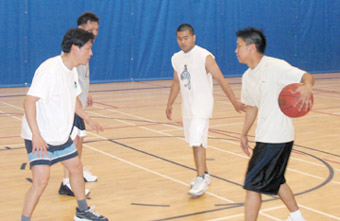 "Daddy told me protective cups are for faggots and he cuts faggot throats for a living."Basketball is an easier sport to understand than football but can still be baffling at times, especially to the casual fan. The NBA’s recent policy of “making up rules for the sake of making up rules” has resulted in an ever-shifting, ever-changing game that makes it hard to understand if rushing the stands and kicking a pregnant woman in the stomach results in a personal foul or a technical.

Again, there are a number of positions in the game of basketball. Since they all do basically the same thing, save for one position, I am going to train my kid to be a guy who shoots the ball or a center. Here are my ideas: 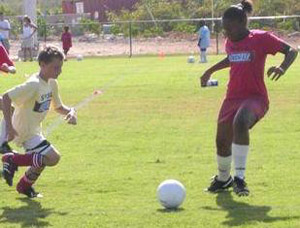 Sometimes it's fun to throw a ball covered in blood in between the kids and yell "Hey! It's your mom's head!" They laugh. After they get done crying.A lot of Americans have problems watching soccer, and with good reason. Soccer is, of course, the most boring sport in the world. However, I am not a marketing executive. I am a man of business. While I understand the U.S. ranks soccer slightly lower than home-improvement style shows on public television, I also realize soccer is the most popular sport elsewhere in the world.

Much like the other sports listed above, I have only a vague idea of what soccer is or how it works. I do understand that there are goalies and guys who kick the ball, however, so I'll just train the kid to be one of those things.

I realize there are some potential caveats to this plan. Given my genetic makeup, the kid very well could be born with some sort of physical disability. This is compounded by the fact that the sort of woman who would bed me would more than likely drink a bottle of gin every day during her pregnancy.

The biggest physical setback is one anyone can be stricken with, however: The child could be born a girl. As far as I know, WNBA basketball is the only professional female sport that pays anything, but even then it gets lower ratings than soccer without the international support. In that case, we'll be moving to Taiwan, where I hear gender reassignment surgeries are cheap and plentiful. Then, after a proper recuperation time, we'll be back to the states and off with the training again.