Okay mister Seagal, in this scene eight cyber assassins are attempting to infiltrate the government's secret weapon vault. Your character is going to karate chop all of them to death. 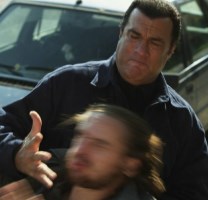 We will secure your feet to this spinning platform which has a camera bolted to it. When we turn the platform and the backdrop at exactly the same rate, it will look like you are standing still and raising your own arms - which will actually rise as a result of centrifugal force. As the other actors throw themselves forward, your arms will appear to hit them and send them spinning.

If you can, please clasp your hands into karate chop hands or make fists or something. It would help if you looked like you were exerting yourself, too. Can you raise an eyebrow? Did you raise it? Okay. How about making a noise? If yelling takes too much effort you can just open your mouth a bit and we'll dub something in post. Great! That's great.

Now, your character is going to be eating ice cream. It's a bonding scene with the undercover counter-terrorist double agent daughter. Super emotional. We need to really sell it.

Here's what we're going to do. You stay seated right there. We will fill a plastic cup with ice cream, and attach that to a mannequin's hand. A crewman will lay on the ground and manipulate the arm as if it is yours. He will ineffectually bump the cup against your entire face for about a minute while your soundalike makes exaggerated chewing noises into a microphone.

Remember, we're looking to drive home the emotion of the scene. The audience needs to believe that you really love that ice cream. It would go a long way if you could stop squinting and scowling. No? Okay. No, I understand. I'd never ask you to go outside of your comfort zone. Maybe you could make eye contact with the daughter instead of watching that golden retreiver rooting around in the trash up the street?

In this scene, your character gets out of his car and walks to the entrance of a bar.

Our prop guy developed this special full-body harness. It's powered by coal, but we can hide the venting in your jacket. Your shades should protect your eyes from any residual smog. When the scene begins, the harness will lift you out of the car and straighten up, gently positioning your body in a standing position. Then the harness will roll across this pair of tracks until it reaches the bar's front door. Pneumatic cylinders located just behind your dangling legs will compress and decompress, making it look as if you are walking.

Your character is going to be very sad in this scene. It will be a real test of your range as an award-winning actor. 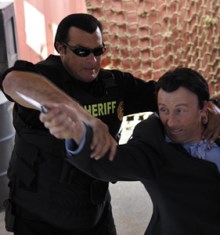 We are going to drop you down this elevator shaft. The camera will be inside the shaft, rotated at a 90 degree angle. The inside of the shaft will be painted like the hallway of a house. When all of these elements are combined, your falling form will appear to be running through a house.

Once you reach the bottom, you will land face first on a large cushion with the word "SAD" printed across it in large letters. This will communicate to the viewer that you are sad. There is absolutely no risk involved. Our rig has been thoroughly tested. The only risk is that you might suffocate when you land face first and don't feel like turning your head. That's why I'll be there to turn it for you.

This is going to be great. It's the big setpiece that will serve as the movie's climax. Your character will dive toward the camera as a CGI explosion goes off behind him.

What we're going to do is attach these marionette lines to your palms, elbows, chin, and knees. Then our team of operators will manipulate these lines to simulate the movement of a human being. To help push you forward at the pivotal moment when the CGI explosion will be inserted, we're going to employ the force of an actual explosion.